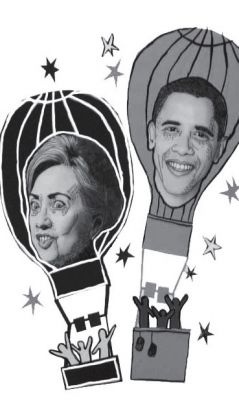 LAS VEGAS—The chairs in the Concorde Ballroom of the Paris Casino were arranged as if for a wedding, but were more a prelude to an ugly divorce.

On one side of the at-large caucus room were supporters, mostly Mexican American, of Sen. Hillary Clinton, led by an organizer for the American Federation of State, County and Municipal Employees (AFSCME) .

On the other side of the aisle were supporters, overwhelmingly African American, of Sen. Barack Obama, led by a shop steward for the Culinary Workers Local 226. Both groups participating in the Jan. 19 Nevada caucus were made up predominantly of women. They shouted at each other, booed, hissed and hurled thumbs down in open, sneering contempt for the opposition. The hostility toward their sister workers on each side had more to do with each other than with the candidates they supported.

Capitalism and its politicians have long played divide and conquer to divide immigrants from other economically suppressed demographic groups. A generation or two ago, Irish, Italians and Jews were bunched by those in power into the same congressional, legislative and city council districts to compete for the same scraps of political representation while White Anglo-Saxon Protestants took the rest of the pie. The same has occurred in recent years as Blacks and Latinos — the two most solid Democratic Party voting demographic groups — have been shoehorned into increasing conflict.

As census trends explode to bring, just two or so decades from now, the Caucasian population of the United States into minority status, entire industries have been launched to prevent a majority alliance from forming along class-solidarity lines. There are book contracts aplenty waiting for divisive pundits like Earl Ofari Hutchison, author of The Emerging Black GOP Majority (2006) and Latino Challenge to Black America (2007).

Black-Latino tensions bubble up from high school brawls in Los Angeles to City Council antics in Buffalo to the prison system where gangs often choose up sides along ethnic and racial lines.

But now it’s exploded out into the open in the Democratic presidential nomination battle, with the Clinton campaign leading the charge.

Remarkably, the race baiting has had little effect on white voters who would be expected to bite, particularly those in rural areas — considered by white urban and suburban liberals to be the racist ones — who in Iowa, New Hampshire and Nevada delivered bigger percentages for Obama than urban and suburban voters. But perhaps white folks were never the intended target of such divisive politics. No, it led, instead, to the Black-Latino divide on display in Las Vegas, one that could cause lasting harm to all progressive efforts — electoral or not — in the near future of the United States of America.

The Clinton White House vs. Mexican-Americans

While president from 1989 to 1993, George H. W. Bush tried to gain approval for a North American Free Trade Agreement (NAFTA) with Mexico and Canada. Just as Ronald Reagan tried before him, he couldn’t convince a Democratic -controlled Congress to go along. That magic trick required the Democratic regime of Bill Clinton — backed by a multi-million dollar corporate lobbying campaign — which rammed NAFTA through.

NAFTA took effect in 1994. It soon devastated Mexican family farmers, many of whom fled across the U.S. border while many more were displaced into Mexican cities and border states to work in sweatshops. That, in turn, sparked a marked increase in undocumented workers in the United States, who are now on the receiving end of the same repressive policies and media-fed demonization that were perfected against African-Americans. In 1993, when President Bill Clinton took office, there were 80,815 men and women in federal prisons.

By the end of his two terms, in December 2000, there were 125,692: an increase of 55 percent over eight years, according to the U.S. Department of Justice. The Clinton administration’s criminalization of the economically poor fell heaviest upon Hispanic-Americans. By 1997, more than halfway through the Clinton White House years, 27 percent of federal inmates were Hispanic (compared to 17 percent of state level inmates). By 2000, 43 percent of all federal drug war prisoners were Hispanic, the most likely group to be first-time offenders, and the least likely to have committed a violent crime. (If anything, these numbers undercount the real impact, since most Hispanic inmates are classified by the prison system as “white.”) Contrary to what CNN’s Lou Dobbs says, these Hispanic prisoners are not primarily “illegal immigrants.” U.S. born Hispanic men are seven times as likely to end up in prison than foreign-born Hispanic men.

And during Clinton’s presidency, the White House made no effort to reform immigration laws or set a path to citizenship for the millions of new immigrants streaming across the border as a result of NAFTA. President George W. Bush has been more progressive on immigration than Clinton ever was.

But after winning the New Hampshire primary, Clinton went to Nevada and made a noisy public play for Latino voters. She walked through a predominantly Hispanic north Las Vegas neighborhood as her first post-New Hampshire media appearance, and noshed guacamole and chips at the Lindo Michoacan restaurant. During that session, with the TV cameras running, a man shouted, “my wife is illegal.” (What man, if his wife is truly in the country without permission, would advertise that fact on national television? The Clinton campaign had been caught earlier in the campaign planting questions, and this incident carried the same media-manipulating smell.) Clinton’s response — “No woman is illegal!”— caused many to forget her doubletalk at a debate last October about drivers licenses for undocumented immigrants when she took both sides of the issue. Indeed, during the Nevada caucus, some of her supporters gushed to reporters that “Hillary supports amnesty” for immigrants.

That blatant level of pandering from the team that had, during eight years in power, done so much damage to Mexican-Americans and their country of ancestry, has to be viewed now in the context of the race-baiting tactics that have dominated the Democratic primaries in early 2008. According to the entrance poll of Nevada caucus-goers, 64 percent of Hispanic voters favored Clinton to just 25 percent for Obama, while 83 percent of African-Americans backed Obama to only 16 percent for Clinton. If those percentages hold in the Feb. 5 California primary (and in other contests that same day in New York, New Jersey, Arizona, New Mexico and Colorado, also with large numbers of Hispanic voters), Clinton may soon be on the road to the Democratic nomination.

The day after his narrow defeat in Nevada, Obama went to the Ebenezer Baptist Church in Atlanta, Georgia, and seemed to acknowledge that he has work to do to reverse, or at least dampen, the trend of Latino voters for Clinton. From the pulpit where Martin Luther King Jr. once preached, he said to the predominantly Black congregation:

“If we are honest with ourselves, we must admit that none of our hands are entirely clean. If we’re honest with ourselves, we’ll acknowledge that our own community has not always been true to King’s vision of a beloved community. “We have scorned our gay brothers and sisters instead of embracing them. The scourge of anti-Semitism has, at times, revealed itself in our community. For too long, some of us have seen immigrants as competitors for jobs instead of companions in the fight for opportunity.” The Obama camp certainly recognizes the problem, but so far hasn’t taken that message to the ground level, to the homes and neighborhoods and restaurants, and, yes, in front of television cameras, to break bread together with Hispanic-Americans to make his case more forcefully. Obama — not Clinton — was a co-sponsor of the Immigrant Reform Bill that was the central issue of 2007 for the Latino population. He has to make that case and do so fast or the Black-Latino rift that the Clintons have so cynically encouraged could become the story of the remaining Democratic primaries, leading to such acrimony that one group, or the other, stays home in November.

Even with an endorsement by Sen. Ted Kennedy, the most visible sponsor of the Immigration Reform Bill and highly respected by many Latino voters, Obama is going to have to confront the Black-Latino rift seen in Nevada head-on if he has hope of gaining the nomination.

The terrible Clinton legacy of U.S. government mistreatment of Mexican-Americans — including the majority that are legal citizens — provides the constitutional law professor and civil rights lawyer from Illinois the opening to do so. But the time bomb of Black-Latino division is ticking and could explode, as soon as Tsunami Tuesday rolls in Feb. 5.