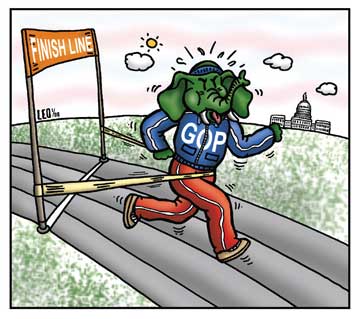 In another life, Rudy Giuliani’s only brush with public notoriety would have been in an orange-jumpsuited, shackled perp walk for setting fire to a dog. An unstable bundle of petty vindictiveness and sadism, complemented by vampirish hairdo and grin, he instead brushed the heights of power. But that’s now all unraveled with his failed presidential bid.

Rudy was supposed to be the Republicans’ king in waiting. Once he entered the contest, so went conventional wisdom, he would glide to the nomination, combining a tough-on-terror pose with 9/11 celebrity and crossover voter appeal.

It was not to be. Giuliani’s packaging could not hide his foibles: estranged children, Bernard Kerik, having the city pay for mistress protection and then trying to cover the accounting trail.

His troubles are symptomatic of the GOP’s existential crisis. Despite a large field of presidential contenders, no one has united the base. The Republicans’ problem is they embody an exhausted ideology that they are unable to repudiate.

Reagan and Bush both united the right under a big tent that sheltered crazies of all sorts, those who believed government is always bad or our fair nation, is being overrun by mud people or reverence for life does not extend beyond the womb or greed is good.

Now, however, the Republicans have split into deranged factions that remain powerful. Each candidate has to preach orthodoxy to appeal to a right-wing group, but they have little hope of winning over the broader electorate because the public has tired of the fanaticism.

Huckabee wooed evangelicals with his talk of the Constitution reflecting “God’s standards.” Ron Paul is the libertarians’ darling because he wants to abolish the IRS. Tancredo’s bloviations about immigration threatening our culture appealed to nativists. Guiliani’s “Islamo-fascism” rhetoric has won the hearts of the Muslim haters. And Romney’s business background secured the support of free-market zealots.

The one Republican bucking the trend, John McCain, is the one despised by conservatives because he strays from party orthodoxy on immigration, campaign finance reform and global warming. But McCain is no moderate, as much as he cultivates the image. Whoever emerges victorious from the Republican scrum will be weighed down in the general election by Bush because they all support the same failed policies.
For 30 years, many Americans have drank the conservative Kool-Aid: that cutting taxes on the super wealthy would trickle down to improved middle class life; that endless war would bring peace; that the private sector would solve every crisis from healthcare to climate change; that finger-pointing piety was preferable to welfare for easing the burdens of poverty. 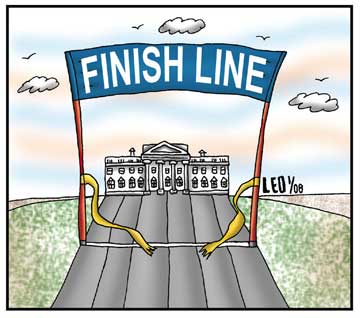 This led to the eight-year-long disaster called Bush. The next president will face grinding wars abroad an economic decline at home. Most Americans have wisened up to the insanity: that more of the same is not going to produce different results. The Republicans have not, and as such, don’t have a reason to be any more. Few are moved by a platform of more prayer, more war and more wealth to the super-rich. The ultimate reason the Republicans are exhausted is because they won the historical battle a long time ago. The Reagan Revolution ushered in neoliberalism, the economic doctrine that all relations must be subject to market forces, which came to fruition under Clinton. He gave us the North American Free Trade Agreement, the end of welfare, deregulation of industry, finance and media, downsizing of government, faith-based social services, and the privatization of prisons, education and warfare.

Bush just added to this. Sure his administration gave neoliberalism a personal touch with corrupt crony capitalism from the Gulf of Mexico to the Persian Gulf, but Enron was a Clinton-era byproduct. Bush may have made real the high-tech police state, but the Democrats embrace it eagerly. Desperate for change, the public appears willing to back Democrats in Republican clothing. Clinton and Obama look to the market to solve healthcare by mandates and global warming by carbon trading, plus they reject withdrawal from Iraq and issue threats against Iran. They may tinker at the edges and tone down the holy war rhetoric against Muslims, immigrants and gays, but war, economic instability and global ecocide will continue. If there is a real difference, it’s that they’re not as deranged as the Republicans. And that’s what this election comes down to.