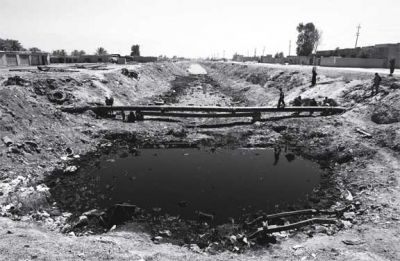 The ecological effects of war, like its horrific toll on human life, are exponential. When the Bush administration (parts one and two) and its congressional allies sent troops to Iraq to topple Saddam Hussein’s regime, they not only ordered these men and women to commit crimes against humanity, they also commanded them to perpetrate crimes against nature. Former Chief United Nations Weapons Inspector Hans Blix, prior to the 2003 invasion of Iraq, said the environmental consequences of the Iraq war could be more ominous than the issue of war and peace itself. Blix was right.

Months of bombing during the first Gulf War by the United States and Great Britain left a deadly and insidious legacy: tons of shell casings, bullets and bomb fragments laced with depleted uranium. In all, the United States hit Iraqi targets with more than 970 radioactive bombs and missiles.

Depleted uranium (DU) is a rather benign sounding name for uranium-238, the trace element left behind when fissionable material is extracted from uranium-235 for nuclear reactors and weapons. For decades, this waste was a nuisance; by the late 1980s there were nearly a billion tons of the radioactive material piled at plutonium processing plants across the country. Then Pentagon weapons designers discovered a use for the tailings: they could be molded into bullets and bombs. Uranium is denser than lead, making it perfect for armor penetrating weapons designed to destroy tanks, armored personnel carriers and bunkers. When tank-busting bombs explode, depleted uranium oxidizes into microscopic fragments that float through the air, carried on the desert winds for decades. Inhaled, the lethal bits of carcinogenic dust stick to the lungs, eventually wreaking havoc in the form of tumors, hemorrhages, ravaged immune systems, and leukemia.

More than 15 years later, the dire health consequences of our first radioactive bombing campaign in this region are coming into focus. Since 1990, the incidence rate of leukemia in Iraq has increased over 600 percent. Detection and treatment of cancers was made unnecessarily difficult by Iraq’s forced isolation under a regime of sanctions, producing what was described by former U.N. Secretary General Kofi Annan as “a humanitarian crisis.”

The Pentagon has shuffled through a variety of rationales and excuses. First, the Defense Department shrugged off concerns about depleted uranium as wild conspiracy theories by peace activists, environmentalists and Iraqi propagandists. When the United States’ NATO allies demanded disclosure of the chemical and metallic properties of U.S. munitions, the Pentagon refused. Depleted uranium has a half-life of more than 4 billion years, approximately the age of the Earth. Thus, thousand of acres in Kuwait and southern Iraq have been — in terms of humanity’s existence — contaminated forever.

The bombing of Iraq’s infrastructure has had further substantial public health implications. Bombed-out industrial plants and factories have polluted groundwater. The damage to sewage-treatment plants, with reports that raw sewage formed massive pools of muck in the streets of Baghdad immediately after Bush’s “Shock and Awe” campaign, is also likely to result in poisoning rivers as well as humans; cases of typhoid among Iraqi citizens have risen tenfold since 1991, largely due to polluted drinking water. That number has almost certainly increased again since Saddam’s ouster.

While Iraq was sanctioned during the 1990s, U.N. officials in Baghdad agreed that the root cause of child mortality and other health problems was no longer simply lack of food and medicine, but the lack of clean water (freely available in all parts of the country prior to the first Gulf War) and of electrical power, which had predictable consequences for hospitals and water-pumping systems. Of the 21.9 percent of contracts vetoed as of mid-1999 by the U.N.’s U.S.-dominated sanctions committee, a high proportion were integral to failing water and sewage system repair efforts.

The future indeed looks bleak for the ecosystems and biodiversity of Iraq, but the consequences of the U.S. military invasion will not be confined to the war-stricken country. On the second day of the 2003 invasion it was reported by the New York Times and the BBC that Iraqi forces had set fire to several of the country’s large oil wells. Five days later in the Rumaila oilfields, six dozen wellheads were set ablaze. The dense black smoke rose high in the sky in southern Iraq, fanning a clear signal that a U.S. invasion had again ignited an environmental tragedy. Shortly after the initial invasion, the U.N. Environment Program’s satellite data showed a significant amount of toxic smoke had been emitted from burning oil wells.

According to Friends of the Earth, the fallout from burning oil debris — laced with poisonous chemicals such as mercury, sulfur, and furans — has created a toxic sea surface affecting the health of birds and marine life. One greatly affected area is the Sea of Oman, which connects the Arabian Sea to the Persian Gulf. This waterway is one of the world’s most productive marine habitats, which, the Global Environment Fund contends, “plays a significant role in sustaining the life cycle of marine turtle populations in the whole northwestern Indo-Pacific region.” Of the world’s seven marine turtles, five are found in the Sea of Oman and four of those five are listed as endangered while the other is classified as threatened.

The gulf’s shores, according to BirdLife’s Mike Evans, are “one of the top five sites in the world for wader birds and a key refueling area for hundreds of thousands of migrating water birds.” The U.N. Environment Program claims 33 wetland areas in Iraq are of vital importance to the survival of various bird species. These wetlands, the U.N. claims, are particularly vulnerable to pollution from munitions fallout as well as from sabotaged oil wells.

Mike Evans also maintains that the current Iraq war could destroy what’s left of the Mesopotamian marshes on the lower Tigris and Euphrates rivers. Construction of dams on the once roaring Tigris and Euphrates has dried up more than 90 percent of the marshes and has led to extinction of several animals; water buffalo, foxes, waterfowl, and boar have disappeared from the area. “What remains of the fragile marshes, and the 20,000 people who still live off them will lie right in the path of forces heading towards Baghdad from the south,” wrote Fred Pearce in the New Scientist prior to Bush’s invasion in 2003. The full effect this war has had on these wetlands and its inhabitants is still unknown.

The real cumulative impact of U.S. military action in Iraq, past and present, won’t be known for years, perhaps decades, to come. Stopping this war now will not only save lives, it will also help to rescue what’s left of Iraq’s fragile environment.

Jeffrey St. Clair is an editor of Counter- Punch.org and author of the forthcoming book, Born Under a Bad Sky. Joshua Frank is the author of Left Out! How Liberals Helped Reelect George W. Bush and edits BrickBurner.org. This article originally appeared on CounterPunch.org and was reprinted with permission by the authors.

Photo: Local Iraqis gather water in an area of Sadr City where there was limited running water in June 2003. At this time, the water was only running once per week through this pipe, and contained cholera and typhoid. The five year war in Iraq has created severe environmental problems including contaminated water, polluted air and radioactive wastelands from the use of depleted uranium in weapons. Photo by Andrew Stern, http://www.andrewstern.net/