Deemed “the most dangerous man in America” in 1967 by FBI Director J. Edgar Hoover, Rev. Dr. Martin Luther King Jr. spent the final year of his life crusading against war and economic injustice. Reviled by the political establishment that once embraced him, King continued to emphasize the power of nonviolent protest and the need for vibrant multiracial coalitions to unify their struggles. After 1,300 Black sanitation workers went on strike in Memphis February 1968 against low wages and inhuman working conditions, King joined their battle, proclaiming that, “all labor has dignity.” King was cut down by a sniper’s bullet on April 4, 1968. He was 39. Summing up his life two months earlier, King said, “If you want to say that I was a drum major, say that I was a drum major for justice … I won’t have any money to leave behind. I won’t have the fine and luxurious things of life to leave behind. I just want to leave a committed life behind.”

Forty years later, people continue to fight for social justice in the streets, courtrooms, classrooms and through personal growth and introspection. 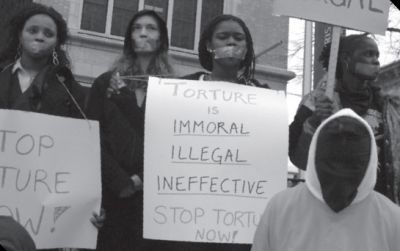 TEENS AGAINST TORTURE: Martin Luther King Jr. was fond of saying, “injustice anywhere is a threat to justice everywhere.” On April 4, immigrant students from Bronx International High School commemorated the 40th anniversary of King’s assassination by donning orange jumpsuits in an action to raise awareness about illegal detentions and human rights violations at Guantánamo Bay, Cuba. Teachers and staff also joined in the protest, which took place outside the Morris High School campus during parent-teacher conferences. Morris High is alma mater to former Secretary of State Colin Powell and home to one of the largest Junior ROTC militry programs in the Bronx. Photo by Sophie Forbes 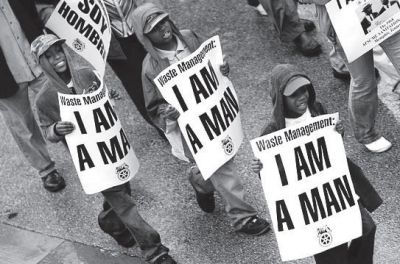 STILL MARCHING IN MEMPHIS: On April 4, thousands of people marched through a steady downpour to the Lorraine Motel where King was murdered. Marchers were joined by a dozen Memphis sanitation workers who struck against the city in 1968. Photo by Mcnamee/Getty 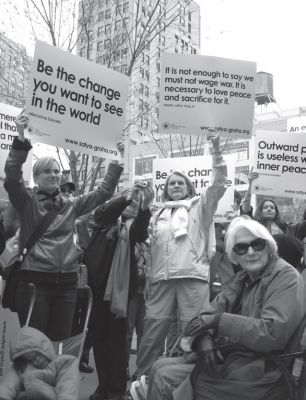 BE THE CHANGE: More than 100 people joined in the “Be the Change Walk” from Midtown Manhattan to Union Square April 6 to honor India’s independence leader Mahatma Gandhi and how his nonviolent philosophy “satyagraha” (“truth force”) greatly influenced King and many in the civil rights movement. April marks both the 78th anniversary of Gandhi’s famous 240-mile Salt March in protest of the occupying British’s salt tax in India and the 40th anniversary of King’s assassination. “A lot of the peace movement is focused on ‘peace, not war.’ However, Gandhi’s message is that of … developing nonviolent strategies from the inside out,” said Helen Tworkov, founder of The Satya Graha Forum, which organized the action.

Harlem resident John Christmas said he was inspired by the event. “I want to create ways to solve conflicts in daily life, instead of using violence or raising my voice, but rather to find constructive solutions.”