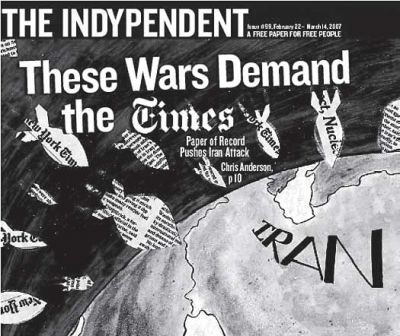 Whatever its end goal, the Bush administration is utilizing the same tactics, accusations and propaganda in preparing the U.S. public for a possible attack on Iran as it did during the lead-up to the bombardment, invasion and occupation of Iraq in 2002–2003. Whether these tactics will succeed a second time, of course, remains an open question. Also, an open question is whether the “paper of record,” the New York Times, will learn any lessons from its own disastrous pre-Iraq war coverage.

There are eerie parallels between the administration’s media strategy in pushing confrontation with Iran — relying on a series of anonymous leaks to administration-friendly reporters and off-the-record background briefings — and the behavior of the press during the run-up to the Iraq war, when it displayed an unfailing willingness to vaunt unproven and hawkish claims.

To read more from The Indypendent’s special report February 2007, “Words of Mass Deception: 5 Years Ago The New York Times’ Use of Unnamed Sources Helped the Bush administration Launch a War. Is it Happening Again?”by Chris Anderson, visit Indypendent.org.

Words of Mass Deception: 5 Years Ago The New York Times’ Use Of Unnamed Sources Helped The Bush Administration Launch A War. Is It Happening Again?
http://www.indypendent.org/2007/02/24/words-of-mass-deception/

How to Get the Story Wrong: Low Points in the Grey Lady’s Checkered History http://www.indypendent.org/2007/02/23/how-to-get-the-story-wrong/