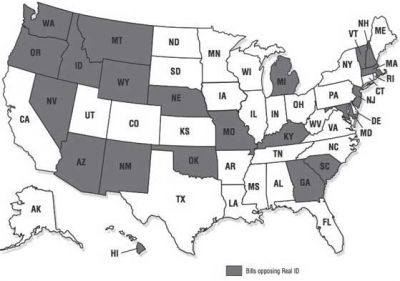 May 11 was supposed to be the deadline for states to issue new national identification cards to comply with the Real ID Act of 2005. The bill has struggled to gain support across the political spectrum and throughout state governments, however, forcing the federal government to backpedal on its deadline by granting extensions for compliance to 2010 or longer.

The highly unpopular and controversial act was sold to the public as addressing the need to set a national standard for state-issued driver’s licenses and ID cards, secure motor vehicle databases, prevent fraud and fight terrorism. But the bill was never up for public debate because it was snuck through Congress May 11, 2005, as a rider on an emergency appropriations bill (H.R. 1268) to fund the Iraq war.

Weary of the government’s plan, 17 states have taken action against the bill in the last three years, for reasons ranging from state’s rights issues, civil liberties and privacy challenges, untenable costs and charges that the federal government is trying to push the failed federal immigration policy onto the states.

The legislation states that national ID cards would be required to board commercial airplanes, enter a federal facility, open a bank account, collect Social Security payments or take advantage of nearly any government service.

Many advocate that the Real ID program oversteps individual privacy rights by requiring detailed personal information, that state databases be interlinked and for the ID cards to have embedded machine-readable” information chips.

“Congress is currently on the path of creating a national ID system that fails to make America more secure while sacrificing individual privacy,” said Caroline Fredrickson, director of the American Civil Liberties Union Washington Legislative Office, in her testimony to the U.S. Senate April 29.

According to U.S. Department of Homeland Security plans, the Real ID might include a digital file of the dimensions of your face, your weight, your height, your address, maybe your Social Security number and your date of birth, all of which could be grafted onto a radio frequency identification (RFID) chip in your license that can received by common machine-readable technology.

Once the Real ID is in your wallet, security experts like Katherine Albrecht, author of Spychips: How Major Corporations and Government Plan to Track Your Every Move with RFID, have confirmed that anyone with a UPC gun can access the ID’s information. Others point out that state motor vehicle departments will not have the necessary technologies to protect information from identity theft.

For those who refuse to use a Real ID, a U.S. passport is an acceptable substitute because newly issued passports use similar technology.

SECURITY IS NOT CHEAP

To create the secure database network, a system of electronic checkpoints and issue new ID cards would weigh heavy on taxpayers and state budgets. The Washington Independent reported May 12 that DHS has only issued $79.8 million in grants to cover the DHS-estimated $3.8 billion total bill.

States including Arizona, South Carolina, Alaska, Idaho and New Hampshire have passed laws making it impossible for state resources to be used to implement Real ID. The current estimated cost for New Yorkers to comply by Dec. 31, 2009, is approximately $84 million.

Despite well-documented public rejection of Real IDs by constituents, New York was the first state to sign on to the program. Former Gov. Elliot Spitzer announced Oct. 27, 2007, that New York would implement the Real ID Act just before he abandoned his plan to offer driver’s licenses to undocumented immigrants. Those acquainted with the legislation understood that only U.S. citizens could be issued a Real ID.

Spitzer’s haste to make New York the first state to implement Real ID as immigration reform was viewed by constituents as a costly uninformed concession for New Yorkers and a setback for undocumented immigrants.

“If you look beneath the surface, it becomes apparent that the intent of Real ID is to transfer the expense and legal complexity of our broken immigration policy from the federal government to our states,” said New York State Senator Eric Schneiderman.

While many New Yorkers advocated for Real ID’s as a secure license to deter terrorism efforts after the 9/11 attacks, Director of Information Policy Studies at the Cato Institute and homeland security expert Jim Harper said warrantless federal control is the reason for its passage.

“I have studied identification and identity cards carefully, and I want you to know that a national ID is neither a protection from terrorism nor a response to the attacks of September 11, 2001,” Harper said during his testimony to the New Hampshire Senate during a Real ID hearing in 2006. “A national ID would satisfy the federal government’s demand for control — not Americans’ genuine need for security and law enforcement.”

Sheila Dean is an anti-Real ID activist and blogger for BeatTheChip.org living in Austin, Texas.