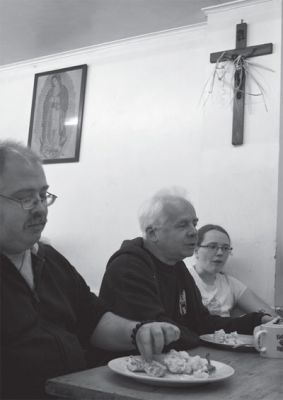 Photo by Thomas Marczewski: Jim Reagan (center) relaxes with other members of the Catholic Worker May 13.

At its Lower East Side headquarters on East Third Street, the volunteer staff of the Catholic Worker, their children and homeless individuals who receive services all gather in a poorly lit basement to celebrate Catholic mass. The priest, the Rev. Robert Kaeding, raises his hands to ask the community what they are praying for.

Cries from the ragtag congregation come out. “May God please end the war in Iraq,” says one. “Let us all remember those in prison, especially the ones on death row,” says another.

In the room normally used as a cafeteria for feeding the local homeless, pictures of Jesus hang next to heroic portraits of César Chavez, Mahatma Gandhi and Dr. Martin Luther King, Jr., underscoring the Worker’s commitment to nonviolent protest and community activism. Rev. Kaeding, dressed informally in sneakers, jeans and a blue oxford shirt, begins to sing a hymn, a cappella. Everyone joins in, most out of tune or singing softly to themselves. One man shakes his keys to keep time with the music.

As the Catholic Worker newspaper marked its 75th anniversary May 1, longtime volunteers vowed to rededicate themselves to the Worker’s mission of advocating peace and social justice and providing refuge for the homeless, in what the Catholic Worker community says is the darkest period in U.S. foreign policy history. But the rising affluence of the surrounding Lower East Side neighborhood and the shortage of young Worker volunteers is raising new questions about the local organization’s direction and purpose.

In the midst of the Great Depression, Dorothy Day and Peter Maurin wanted to spread the word about the church’s teachings on social justice and published the first issue of the Catholic Worker in 1933, handing out 2,500 copies in Union Square for one penny each (the price remains the same today). Not long after, a few people organized two Catholic Worker houses of hospitality in the Lower East Side where people could live in a communal environment and practice the pacifist philosophy espoused in the paper’s pages. The project expanded to include a farm in Marlboro, N.Y. Today, 185 Catholic Worker communities have been founded worldwide to address local needs.

“The Worker seems like a weird thing in America because we try to join our faith with our antiwar work and our social justice work,” says Bill Griffin, long-time volunteer and associate editor at the newspaper, contrasting the leftist stance of the Catholic Worker with the religious right in U.S. politics.

But as gentrification swiftly transforms its Lower East Side surroundings, the Worker community has been divided about how to react. The $20 a week that the community provides to live-in volunteers seems like less and less in one of the most expensive neighborhoods in Manhattan. And the homeless at St. Joseph House’s open soup kitchen on East First Street are traveling from further and further away for their meal.

“We should be in the South Bronx somewhere,” says Jim Reagan, a resident of St. Joseph House. “But we have friends on the Lower East Side who rely on us. Do we abandon them?”

Reagan is one of the volunteers who says that serving the homeless is the Worker’s primary mission. Others in the community see peace activism as being equally important.

“This is a community of resistance against a war-making state,” says Carmen Trotta, a long-time resident of St. Joseph House. 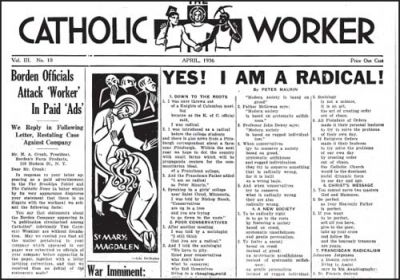 The twin missions of the Worker community compete for the volunteer staff’s time and energy, with many members of the community advocating an increased focus on one or the other.

There is no leader of the Catholic Worker, no guru supplying guidance and no clear party line. “It’s basically an anarchist commune,” said Silke Tudor, a volunteer who recently moved into St. Joseph House. “It takes at least four weeks to decide anything.”

The underlying tension between those who emphasize acts of charity over antiwar actions persists un-addressed. Many members in the community are frustrated that the Worker does not do more to further other causes, including gender and reproductive rights, two nontraditional causes for a Catholic organization.

Not officially recognized by the government, the Catholic Worker does not identify itself as not-for-profit organization. Its soup kitchen operates without a city permit and the food it provides to the homeless is donated by people in the neighborhood.

“We are not an institution. We host people in our home,” says Reagan. “I shouldn’t have to get permission to do what my faith dictates in my home.”

Volunteers from across the country and the city come on a daily basis to assist with the soup kitchen at St. Joseph House. Pooled primarily from Catholic high schools and universities on service trips, these visiting volunteers are the source of the Worker’s staff.

But fewer and fewer college students are willing to live a life of voluntary poverty by joining the Worker in New York.

“It scares me that the Worker has an older volunteer base now than ever before,” Reagan says. “We don’t get young college volunteers because of the student loan industry.”

While the aging volunteer staff and divided vision of the New York Catholic Worker make the community’s future steps seem unclear to an outsider, the Worker sees itself as thriving, with the widely disparate internal agendas adding to the spice of community life.

Fundamentally, every member of the Worker community is committed to “trying to be an example of an alternative way of life,” Trotta says. The 75th anniversary provides an opportunity for the community to reflect on the miraculous unity of the New York Catholic Worker despite its staggering diversity and its radical anarchist lack of centralized organization.

MAY 1, 1933
The Catholic Worker is first distributed in Union Square for a penny a copy. At the height of its popularity during the Great Depression, the radical tabloid-sized paper, which strongly promoted pacifism, environmental justice and sweeping economic reform, had a circulation upwards of 150,000 copies per issue and was distributed largely by hand to those on picket and bread lines. 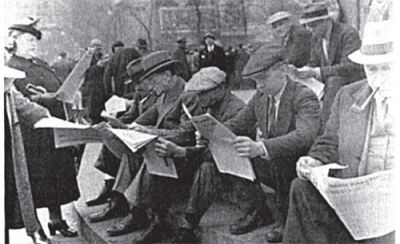 MAY 1936
Dorothy Day and members of the New York Catholic Worker support striking maritime workers by setting up a temporary Catholic Worker headquarters near the docks to provide shelter and meals. The movement begins to encourage clerical support for union efforts.

AUGUST 1940
Dorothy Day pens a controversial open letter to all Catholic Worker houses asserting the centrality of pacifism to the movement. She publicly supports conscientious objectors, a move that generates public hostility and costs the Worker many of its initial volunteers and readers, with circulation of the paper dropping to a low of 50,000 copies.

JUNE 15, 1955
The Catholic Worker, along with the War Resisters League and the Fellowship of Reconciliation, gathers in City Hall Park in defiance of the Operation Alert civil defense drill, a three-day test of the United States’ ability to function under atomic attack. The protests reach their peak in 1960 when New York intellectual celebrities like Norman Mailer join the radical Catholics in renditions of civil rights anthems. Operation Alert was finally cancelled in 1962.

PRESENT
Annual Good Friday march for peace across 42nd Street, culminating in an action in front of the Times Square military recruitment center.