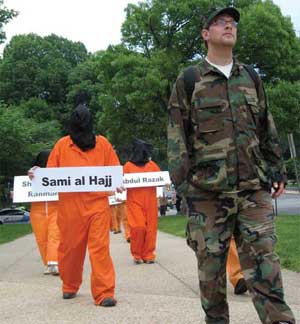 November 13, 2001 — President Bush issues Military Order No. 1, allowing indefinite detention of any non-citizen in the global “War on Terror.” The order strips the detainees of the right to a hearing in any U.S. or foreign court or international tribunal, providing for them to be tried by military commission and sentenced “in accordance with the penalties provided under applicable law, including life imprisonment or death.”

January 11, 2002 — Twenty prisoners arrested during the U.S.-led war on Afghanistan arrive at Guantánamo Bay, Cuba. By 2008, more than 750 men will have been held at the prison.

February 19, 2002 — Lawyers for the Center for Constitutional Rights (CCR) file petitions of habeas corpus, or the right to challenge the detention of Guantánamo detainees.

November 2002 — Maj. Gen. Geoffrey H. Miller is given command of Guantánamo Bay. Under his direction, every aspect of detainees’ lives is manipulated to facilitate the interrogation process.

April 2003 — A Working Group on Detainee Interrogations in the Global War on Terror, convened at the behest of former Defense Secretary Donald Rumsfeld, recommends tactics including sleep deprivation, hooding, threat of transfer to countries where detainees may be tortured and the use of dogs.

June 28, 2004 — The Supreme Court rules 6‑3 in Rasul v. Bush that Guantánamo detainees have the right to have habeas corpus claims heard in federal court. In Hamdi v. Rumsfeld, issued the same day, the court decides 8-1 that U.S. government may not indefinitely detain U.S. citizens without due process rights.

July 2004 — The Defense Department begins “Combatant Status Review” hearings to determine whether Guantánamo detainees should be classified as “unlawful enemy combatants.” By March 2005, the panels, composed of military officials, find 520 of 558 detainees to be enemy combatants.

June 29, 2006 — Supreme Court rules in Hamdan v. Rumsfeld that all detainees held by U.S. government in Guantánamo are protected under the Geneva Conventions. The ruling strikes down the November 2001 assertion that the executive has the authority to try detainees under military commissions.

October 17, 2006 — President Bush signs the Military Commissions Act, overriding the 2006 Hamdan decision, authorizing the president to classify detainees as “alien unlawful enemy combatants” to be tried by military commission. The act redefines the terms in Common Article 3 of the Geneva Conventions and narrows the definition of “cruel, inhuman or degrading treatment or punishment.”

February 2, 2007 — The first charges under the Military Commissions Act against Guantánamo detainees are filed against three defendants.

June 22, 2007 — Lt. Col. Stephen Abraham, a military lawyer who helped oversee the Combatant Status Review Tribunal process, files an affidavit with the Supreme Court claiming that the hearings were patently unfair and relied on evidence that would not withstand the most basic legal challenges.

June 29, 2007 — The Supreme Court announces that it will hear the Al Odah and Boumediene cases (see story this issue).

Jumpsuit Justice Has to Go by Ellen Davidson

Guantánamo: A Threat to Us All, by Ann Schneider

Guilty Until Proven Innocent: The Transcript of Arkin Mahmud’s Hearing