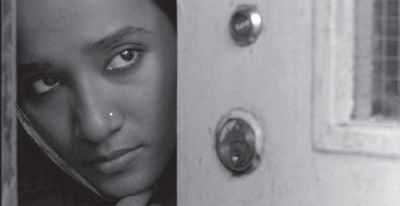 “If Allah wanted us to ask questions, he would have made us men.”

That was the rule for Nazneen (Tannishtha Chatterjee) in her Bangladesh girlhood in the 1970s. It was the rule when, at 17, she was sent far from home to be the wife of a man more than twice her age, whom she had never met. It is the rule 16 years later, in 2001, when she lives with Chanu (Satish Kaushik) and their two teenage daughters in London’s East End, preparing meals, tending her family’s needs, and praying, rarely leaving their apartment.

Nazneen is lucky, compared to many women in the Bangladeshi community; Chanu is pompous but kind and has never beaten her. She longs, however, to be reunited with her wayward, but beloved, sister in Dhaka. Chanu, too, longs to return to Bangladesh — as a big man, a success.

But the promotion that would enable them to return home continues to elude Chanu, and when Nazneen begins to take in sewing to bring in more income, she finds herself attracted to the young man who delivers and picks up the work. The attraction leads to an affair; even more significantly, it leads Nazneen to begin asking questions.

It’s a familiar story, as familiar as the equivalent for men: the coming-of-age story often called a Bildungsroman (from the German for “education novel”). In the male version, a young man finds himself, growing out of adolescent self-absorption into engagement with the wider world, often discovering sex along the way. The women’s version, tellingly, has no name and takes a different form: A woman already grown and often married, but sexually unawakened, finds herself through passion. From Kate Chopin’s The Awakening to Alice Walker’s The Color Purple, the protagonist in such tales is moved to make changes in her domestic life or her love life. Far more rarely, however, is she moved, as the male protagonists almost always are, into the spheres of action that have an impact on the world beyond the home — the worlds, say, of politics or art.

And so it is with Nazneen. The community in which she lives is changed by the events of Sept. 11, 2001; discrimination against Muslims takes on a different and more sinister cast, and Nazneen’s young lover, Karim (Christopher Simpson), becomes an activist for Muslim and Bangladeshi equality. Nazneen does not; indeed, in the end, she finds herself closer than ever to Chanu, who rejects politics in favor of an individualist ethic.

In the movie, and in the best-selling novel by the Bangladeshi-British writer Monica Ali on which the movie is based, Nazneen finally takes charge of her life, making a profoundly important decision for her family when Chanu cannot. In the book, however, she takes at least a baby step toward her lover’s activism.

The making of Brick Lane engendered controversy in England. Some Londoners from the Sylhet region of Bangladesh claimed that Ali’s novel had portrayed them insultingly and protested plans to film parts of the movie in the real Brick Lane. British feminist writer Germaine Greer supported the protest and was eventually called a philistine and opponent of free speech by Salman Rushdie, the Indian-British novelist whose 1988 novel, The Satanic Verses, earned him a death sentence from Iran’s Ayatollah Ruhollah Khomeini. But to this Euro-American reviewer’s eye, the film presented a friendlier, more nuanced vision of England’s Bangladeshi population than of women’s liberation.