Cranes fall. Billion-dollar corporate giveaways are negotiated behind closed doors. Greedy politicians and executives seek to dismember a not-for-profit healthcare company utilized by millions of people. Each of these stories and a hundred others like them are presented randomly by the media. Yet, a single-minded logic flows through them all. As our city is auctioned off to the investor class, is there room for any other concern besides maximizing profit?

This article is part 1 of 3 in the Carving Up New York series, please see part 2 and part 3 in this issue of The Indypendent.

Maurice Jenkins, a 50-year-old MTA station agent, stands on his feet for many hours a day, and despite a click in his knee, he has no major illness or condition that needs medical attention.

However, Jenkins and much of New York’s municipal work force face an uncertain future as their main health care providers, GHI (Group Health Incorporated) and HIP (Health Insurance Plan for Greater New York), move to convert themselves into a single, for-profit enterprise.

“I’m not satisfied now,” says Jenkins, who has worked at MTA for 27 years. “You have to shop around to different doctors to get anything done. But the wild thing is, it could get worse.”

GHI and HIP are the two largest remaining not-for-profit insurers in the region, with combined annual revenues of $7 billion. They cover 93 percent of the city’s work force, some 518,000 people, and about 4 million people statewide.

The two organizations united in 2006, raising antitrust concerns that were not pursued by state or federal officials. In April 2007, Emblem Health Inc., the parent company of GHI-HIP, filed a conversion plan with the State Department of Insurance.

The conversion is a fundamental change in corporate structure that will legally obligate GHI-HIP executives to make as much money as possible for shareholders, and critics worry that it will unleash the same market forces that have left tens of millions of Americans uninsured or underinsured.

“Consumers’ cost of coverage will increase and benefits will weaken or water down,” says Chuck Bell of the Consumers Union, who spoke at a June 19 protest organized by the Coalition Against Privatization (CAP) outside of GHI’s headquarters. 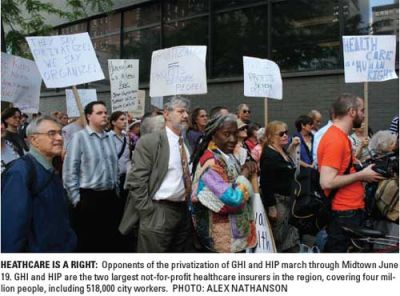 According to GHI’s web site, converting to for-profit status will allow the company to raise more funding in capital markets and be able to offer “greater flexibility in types of coverage, more choice in benefit plans, and more customer-driven innovations that improve access to care.” GHI also says rates for customers will be determined by the same factors as before.

“They [GHI-HIP] are going to start to differentiate their customers,” says Laursen. “People who are more affluent are going to get all sorts of boutique packages that they will be charged lots of money for. For less well-off people they [GHI-HIP] will charge a lot more money for a narrower range of services.”

The conversion plan has received little attention and has gone largely unchallenged by the leadership of the city’s municipal unions. The first public outcry came in late January when the State Department of Insurance public hearings were held in New York City and Albany.

Some 300 people attended the events to voice their opinions before New York State Superintendent of Insurance, Eric Dinallo, who will make the final decision.

According to the city’s Deputy Mayor of Operations, Edward Skyler, who spoke at January’s hearing on behalf of Mayor Bloomberg, the conversion will lead to higher premiums that the city will have to make up.

“All factors demonstrate that GHI and HIP cannot convert to a for-profit corporation without inflicting irrecoverable harm on the city,” Skyler said at the Jan. 29 hearing in New York.

The city has filed a lawsuit to block the consolidation and conversion of GHI and HIP that is still pending in the courts.

“It’s good news,” says Bill Wharton, a CAP organizer. “We really didn’t expect this and it’s definitely taking a turn for the better.”

If the conversion does go forward, the City would like to receive a sizeable chunk of the $3-5 billion in assets that will be liquidated when GHI-HIP goes private. So too would various unions. By law, all the proceeds from the conversion would go into the State’s coffers even though the City has contributed 60 percent of the combined value of GHI-HIP since the two groups were founded in 1937 and 1947, respectively.

For Laursen, the proposed conversion of GHI-HIP is a part of larger trend over the past 20 years of mutual insurance companies transforming themselves into for-profit ventures.

“The slow-rolling collapse of our health care system”

“The for-profit drive that started at the top of the insurance market with the likes of Prudential and Equitable and continued with many of the Blue Cross/Blue Shields has worked its way down to outfits like GHI-HIP, who for a long time have been the place you went if you wanted low-cost coverage of all the basics,” Laursen says. “This is another ingredient in the slow-rolling collapse of our health care system. The private sector can no longer provide a model of coverage for low-income people with chronic health problems.”

In what may be a sign of things to come, compensation for HIP’s top ten executives doubled in 2007 with CEO Anthony Watson leading the way, according to a report in the New York Sun. Watson’s pay jumped to $4.79 million in 2007 from $2.15 million. HIP’s Chief Operating Officer Daniel McGowan earned $2.46 million, up from $1.14 million while Chief Financial Officer and General Consul Michael Fullwood was paid $1.99 million, an increase from $896,000. 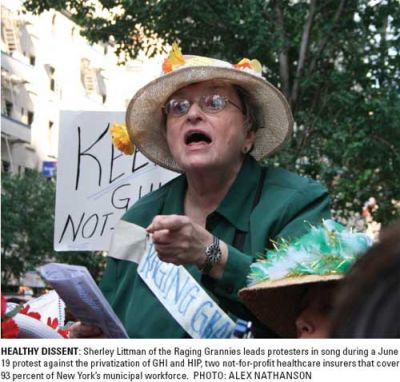 While top executives prosper, Laursen says the cost of for-profit conversions like the ones being pursued by GHI-HIP falls on the public sector.

As the number of uninsured people in the United States has increased to 47 million in 2006 and another 40 million are under-insured, the battle for CAP isn’t solely for preventing the privatization of GHI-HIP. It’s allied with Health Care Now, a national coalition that is pressing the United States to join the two dozen nations in the industrialized world that have adopted universal, single-payer health care, a government-sponsored system that guarantees coverage to everyone regardless of income or pre-existing conditions. Legislation that would guarantee this currently has only 88 co-sponsors in the House of Representatives.

“Any kind of national reform where you reduce the cost of administrative spending will increase health care quality,” Bell said. “It could get consumers more efficiency and bang for their buck in terms of health care coverage.”—

Laursen, who suffers from asthma, would like to see such a move. After being covered by GHI for the past seven years through his union, he switched last month to a bare bones plan offered by Oxford Insurance due to skyrocketing rate increases from GHI.

“They are trying to jack things up now so their balance sheet looks better to investors,” Laursen says. “You can’t wait until you go private. You have to make yourself look good now.”

As for Maurice Jenkins, he says GHI has been good about covering his checkups, but he still worries about being denied coverage for more serious problems that might arise after the company goes private.

“Checkups aren’t what is important when it comes to health care,” said Jenkins. “What is important is that they take major surgeries or chemotherapy — that is what matters.”