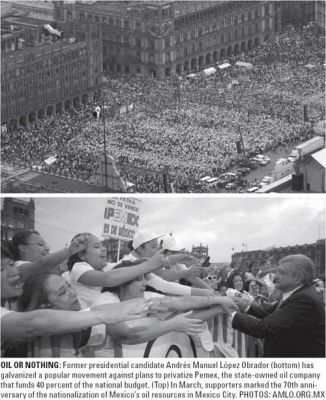 MEXICO CITY—Proposals to privatize Mexico’s state-owned oil industry have sparked a powerful movement in the streets, led by a leftist political leader who narrowly lost the 2006 presidential election.

The National Movement in Defense of Oil (Movimiento Nacional en Defensa del Petróleo or MNDP), headed by former presidential candidate Andrés Manuel López Obrador, formally presented a resolution to the Mexican Congress on June 3. It calls on the Congress to organize a Nationwide Referendum to let the people vote on the six privatization planks in the energy “reform” plan initiated by Mexican President Felipe Calderón.

The conservative majority in Mexico’s Congress has refused to approve such a referendum, saying it would be unconstitutional. Ironically, Mexico was the first Latin American nation to nationalize its oil reserves in 1938, and is now moving to loosen state control of the industry just as oil prices are hitting record highs. The privatization plan is also being pushed at a time when other Latin American nations, such as Venezuela, Bolivia and Ecuador, are moving to assert greater state control over their own oil resources.

Lopéz Obrador officially lost the 2006 presidential election by 0.2 percent of the vote, amid widespread allegations of fraud by Calderón’s ruling conservative party.

Critics have accused the promoters of the national referendum — and López Obrador in particular — of “fomenting instability, violence and chaos” across Mexico. In addition, both Calderón and Jesus Reyes Heroles, the director of Pemex, Mexico’s state-owned oil corporation, have insisted that a referendum is out of the question, as their reform plan is too complicated for the Mexican people to be able to understand. Such accusations have not prevented defenders of Mexico’s oil resources from moving forward.

In early June, a wing of López Obrador supporters in the leftist Party of the Democratic Revolution (PRD), all mayors, announced that in their cities and villages, they will convene referendums on the national energy reform plan. Marcelo Ebrard, the mayor of Mexico City (which holds about 10 percent of the country’s population and is its nerve center), announced that he would convene a referendum July 27.

Ebrard’s announcement was met with protests by top-level Calderón government officials, who warned Ebrard not to go ahead with the referendum, hinting that he might face impeachment proceedings.

López Obrador has since announced that — no matter what is decided in the Congress or what happens with the municipalities where local referendums are already being organized — the MNDP will hold a national referendum Aug. 7 in the country’s remaining 2,500 electoral districts. “The people are sovereign, the people must decide,” López Obrador said.

An outdoor assembly of the MNDP will be held in Mexico City June 27 and plans for organizing the Aug. 7 nationwide referendum will soon be announced.

The move toward an unauthorized national plebiscite follows months of agitation and organizing by López Obrador and his forces. In April, López Obrador’s congressional allies occupied the legislative chambers for 18 days while tens of thousands of mostly female oil defense “brigadistas” rallied in the streets outside. These efforts stalled Calderón’s initial attempt to rush the privatization plan into law and forced a national discussion.

Ten debates have followed in Congress and López Obrador’s forces have demolished Calderón’s supporters. Although the debates have only been covered on pay-per-view TV stations, privatization opponents have made videos available on YouTube and are selling inexpensive DVDs all across Mexico. They are also distributing a popular comic book by the well-known cartoonist El Fisgón, which explains the privatization plan simply and clearly.

The shutdown of the Congress also gave the MNDP time to organize a movement of brigadistas and defense committees in every town and village in the country to explain the real nature of the privatization plan. At an April rally in Mexico City, López Obrador announced that his movement was planning to mobilize 200,000 brigadistas who would go door-to-door in their communities,with the goal of talking to ten million Mexican families by August.

“What moves us is the love of country and the humanistic calling to love one’s neighbor,” López Obrador told the crowd. “Fighting for the poor, the despised and the downtrodden is our essential purpose. We are confident that the power of love will prevail over avarice and manipulation.”

The decision by López Obrador and the MNDP to go forward with the referendum has increased political tensions in Mexico. While López Obrador’s critics accuse him of treason, newspaper columnists are speculating that the MNDP could be financed by drug cartels — a fabrication culled directly from CIA disinformation manuals.

But this is not a toothless accusation. Already six states in northern Mexico are being militarized and occupied by the Army and special forces. New drug dealers are constantly being “discovered” — scapegoats for the regime, as it is widely accepted that it’s the Army and the local, state and federal politicians (many with strong links to politicians and banks in the United States) who are the main players in the drug trade.

Meanwhile, guerrilla armies are emerging to further sow division and confusion. In Mexico, there is a long history of governmentfunded “guerrilla” groups that arise when true mass movements are taking foot, to split the movement and dislocate it.

The emergence of new “guerrilla forces” in turn gives the government the pretext to further militarize the country, or suspend the democratic right to assemble or place a voting booth for the referendum in your neighborhood or school — in other words breed chaos, which can then be blamed on the resistance movement.

This new situation is also deepening the public fissures within the PRD. The PRD formally supports the national referendum proposal by López Obrador. However, at its June 1 national leadership meeting, the party endorsed a proposal by PRD leader Acosta Naranjo to form a bloc with three other parties with the purpose of submitting an alternative energy reform plan that fundamentally accepts the privatization tenets of Calderón’s plan and simply delays the introduction of some of the privatization mechanisms in certain sectors of the industry. López Obrador, for his part, has said that under no circumstances will he accept a better privatization plan. He insists that the whole government reform plan must be scrapped.

Mass Movement in the Streets

To the chagrin of the Mexican ruling class and the PRD’s conservative wing, López Obrador has created his own movement independently outside the PRD. He maintains a hectic pace, speaking to huge rallies wherever he goes. He has become increasingly bold and confident in his speeches. Speaking in Baja, California, in early June, he stated publicly that Calderón should call it quits.

“Calderón has failed in his attempt to privatize Mexico’s oil resources. The Mexican people are not ‘ignorant,’ as Calderón and Reyes Heroles [of Pemex] would have us believe. They are an intelligent and dignified people who can see that their resources are about to be stolen and who are not going to stand by and allow it to happen …

“Calderón should contact his paymasters in the United States and Spain [Calderón was about to embark on a trip to Spain] to tell them that he has failed in his attempt to do what they entrusted him to do when they financed the massive fraud that brought him to power in July 2006 — that is, he has failed, and will continue to fail, of this we have no doubt, in his effort to turn over our oil resources to the U.S. and other transnational oil corporations.”

A Line in the Sand

On June 8, more than 600 delegates, representing 200 unions, community and peasants organizations comprising the Diálogo Nacional, met in Mexico City and voted to support the national referendum proposed by López Obrador.

Fernando Amezcua of the Mexican Electrical Workers Union (SME) received a standing ovation from the delegates when he urged the assembly of Diálogo Nacional to support the nationwide referendum, oppose the privatization of Pemex and of all state enterprises and services (including the electricity sector), and call for the repeal of the counter-reform of the public healthcare plan for public-sector workers.

These unionists and activists pledged to place their resources at the service of organizing this national referendum. Many people assert they will do whatever is necessary to stop this energy reform package from going through.

“This is our line in the sand,” one said. “We are doing this for our children and grandchildren; if the American oil companies are allowed to take back Pemex, our children will have no future.”

Alan Benjamin is a writer and editor for The Socialist Organizer (socialistorganizer.org).