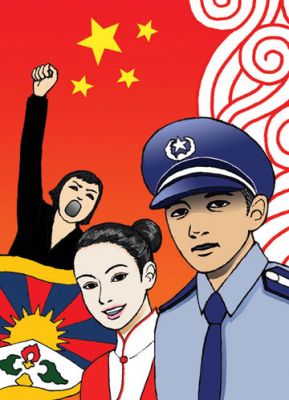 “This ‘Shut up and play’? That’s not okay. That’s not the Olympics.” So wrote Sports Illustrated’s Aditi Kinkhabwala, joining a rising chorus of sportswriters criticizing the pre-emptive repression of speech of Olympic athletes.It’s no doubt worthy of their ire.

The British Olympic Association told its teams in writing that they are forbidden to speak out “on any politically sensitive issues.” Other countries have done the same.

Canadian Olympic Committee President Dick Pound made crystal clear to the Canadian Olympians, “If it is so tough for you that you can’t bear not to say anything, then stay at home.” USA basketball and Duke coach Mike Krzyzewski said, “None of these athletes [has] a responsibility to be political. They have the responsibility to represent their country.” And International Olympic Committee head Jacques Rogge has also said that “political factors” need to be kept away from the games.

This hypocrisy is mind-boggling. The entire reason the Olympics are even in Beijing is political in nature — an effort by the West to embrace China as a 21st-century economic and military superpower. The Olympics were to be China’s coming-out party. Yet the recent crackdown in Tibet has opened a can of worms, where athletes and professional protestors are rushing to condemn every aspect of China’s Stalinist market economy: China’s treatment of Tibetans, role in Darfur, and labor rights and environmental abuses.

And that’s just for starters. As we have seen in the running of the Olympic torch — turned into a protester obstacle course — everything is on the table. The repression of speech by Olympic officials occurs precisely because many athletes want to talk.

American softball player Jessica Mendoza, who won a bronze medal in the 2004 Athens Games, is part of a coalition of more than 200 athletes called Team Darfur. She is planning to wear Team Darfur wristbands in Beijing when she’s not competing. “I don’t think it’s my place to tell China what to do,” she told Vahe Gregorian of the St. Louis Post-Dispatch. “But I do think it’s my place to tell people what is happening. I want people to know that nearly 400,000 people have been killed in Darfur since 2004.”

Mendoza also invoked that ultimate moment when protest and politics intersected, the Black Power salute of John Carlos and Tommie Smith on a podium at the 1968 Mexico City Games. Mendoza described it as “an effective use of their time in the limelight” — even if they were “sent packing” and expelled from Olympic Village. “They otherwise might not have been heard somewhere else,” she said. “That was a moment in time to watch.”

And yet, while I support the right of any athlete to speak out and not be silenced by Olympic bureaucrats who want to make things pleasant for China’s rulers, we should also look critically at what it is that people are protesting.

It speaks to a far different set of concerns than those represented by Tommie Smith, John Carlos and the Olympic Project for Human Rights.

Smith and Carlos came to Mexico City to raise awareness about injustices happening in their own country. They wore no shoes on the stand to protest poverty in the United States. They wore beads to protest lynching in the United States. They wore gloves and raised them during the playing of the anthem to signify dissent against the way the African-American Olympic athletes were treated. As they said in their founding statement, “Why should we run in Mexico City only to crawl home?”

Yet none of this 2008 crop of athletes is daring to say that maybe protest begins at home. They are raising concerns about China’s policies in Tibet or Darfur, but not the U.S. wars in Iraq or Afghanistan. There are concerns about China’s labor standards, but not the way their own sponsors, like Nike, exploit those standards. No wonder the head of the U.S. Olympic Committee, Chief Executive Jim Scherr, issued a surprisingly benign statement that athletes should “do what they want to do” but “shouldn’t feel undue pressure to be a part of someone else’s cause.” But blaming China for the ills of the world ignores the stubborn fact that there is a reason the games are in Beijing. Western complicity in China’s crimes isn’t challenged by bashing China. It’s only covered up.

Dave Zirin is the author of the book, Welcome to the Terrordome: The Pain, Politics and Promise of Sports. This article was originally published on his website edgeofsports.com and is reprinted with permission.