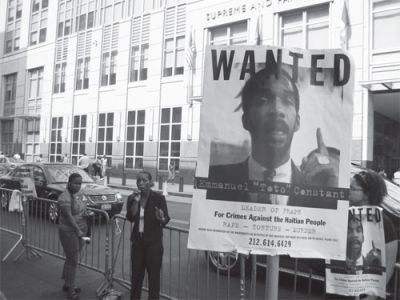 Constant, who led the Revolutionary Front for the Advancement and Progress of Haiti (FRAPH) paramilitary under Haiti’s military junta in the early nineties, fled Haiti in 1994 after a warrant was issued for his arrest in connection with murder and torture.

Since then, a court in Haiti convicted him in absentia in 2000 for his role in a massacre, and he was found liable in 2006 in a New York civil suit for overseeing systematic rape and torture in Haiti and ordered to pay three victims $19 million.

Now, Constant is due for sentencing on Sept. 10 by state Supreme Court Justice Abraham Gerges and faces up to 15 years in prison. This time, however, it’s not for human rights crimes but mortgage fraud and grand larceny. After serving whatever prison term is imposed, Constant will be deported back to Haiti.

Constant was arrested in 2006 following a police investigation into a Long Island-based mortgage fraud scheme that used “straw buyers” and inflated appraisals to defraud lenders out of $1.7 million.

After Constant fled Haiti he surfaced in Queens and managed to stay there for years despite a deportation order issued by a U.S. immigration judge in 1995. In 2000, the Haitian Supreme Court convicted him of having command responsibility over the perpetrators of the notorious 1994 massacre in Raboteau, a poor neighborhood in the city of Gonaives, in which up to 50 people were murdered. After Constant spoke publicly of the role of his former employer — the CIA — in financing and instigating the FRAPH death squad, the United States refused requests from the Haitian government for his extradition.

Constant was actually arrested in Queens by immigration agents in May 1995, held in a detention center in Maryland and ordered deported by a judge that September. It did not come to pass, however. According to a June 2001 report in the Atlantic Monthly, in 1996 Constant was “mysteriously … released under a secret agreement with the U.S. government — even though the Haitian government had formally requested his extradition and U.S. authorities had found photos of his group’s victims, their bodies mutilated, pasted to the walls of his Port-au-Prince headquarters like trophies.”

Five days after his mortgage fraud conviction, another judge upheld the $19 million levy issued in 2006 against Constant after he appealed to have the civil case dismissed and the judgment revoked. On July 30, Judge Sidney H. Stein rejected Constant’s “bald self-serving assertions that FRAPH did not have anything to do with the government of Haiti,” and added, “… there is no conceivable doubt that defendant was the leader of FRAPH, a violent and brutal paramilitary organization. …”

Constant was held liable for overseeing torture, including rape, attempted extrajudicial killing and crimes against humanity, following a 2004 civil suit filed by the Center for Constitutional Rights (CCR) and the Center for Justice & Accountability (CJA) on behalf of three women who survived FRAPH’s campaign of violence against women.

Constant’s prosecution for fraud has been greeted by human rights advocates as a first step in bringing the death squad leader to justice. As CCR Senior Attorney Jennie Green put it, “he needs to be exposed for being the crook that he is.”

For years, the Haitian community, lawyers, human rights organizations and supporters have been organizing against Constant and the U.S. government for the failure both to enforce the 1995 deportation order and to prosecute him as required under the United Nations Convention on Torture, of which the United States is a signatory.

On the first morning of Constant’s pre-trial, July 8, about 50 people gathered outside the court house, calling for Constant to be brought to justice for his human rights crimes. The rally was co-sponsored by the Center for Constitutional Rights, the women’s rights organization Dwa Fanm, Fanmi Lavalas, the Haiti Support Network and the International Action Center.

Barbara Victome, program director of Dwa Fanm (Haitian Kreyol for “women’s rights”), said at the rally that Dwa Fanm was protesting because “we represent the voice of so many women who’ve lost their lives at the hands of this death squad” and “we are asking that justice be done for these women.”

Dwa Fanm is in contact with women’s groups in Haiti, and Victome observed, “Many have suffered torture, rape as a result of the atrocious crimes by this death squad … Even here in the U.S. there are many women who have never had justice.”

Victome added that “this kind of man should not run the streets free,” and “when the justice system is up and running in Haiti, we hope that he will stand trial in Haiti.”

Haitian and U.S. human rights attorneys warn, however, that the Haitian justice system is currently incapable of bringing Constant to justice or preventing him from terrorizing the population in Haiti again.

That’s because Haiti’s justice system remains extremely corrupt and politicized, despite the election of a new government in 2006. The election followed the second coup d’état against Haiti’s first democratically elected president, Jean Bertrand Aristide, in 2004. Following the coup, which many observers contend was instigated by the United States, Canada and France, Haiti was ruled for two years by an unelected junta under a U.S. embassy-appointed prime minister, Gerard Latortue. During Latortue’s watch, hundreds of Aristide supporters were killed by the Haitian National Police and U.N. forces.

Most striking, Haiti’s entire Supreme Court was fired by Latortue. In 2005, 15 of the Raboteau massacre convictions were overturned, in a move that has been condemned by Amnesty International and other leading human rights organizations.

Constant had fled to the United States when Aristide returned to power in 1994 following a 1991 military coup against his government. He was reinstalled in a U.S. military intervention under President Bill Clinton, after three years of U.S.-brokered negotiations between Aristide and the ruling military junta.

As the price for restoring democratic rule, the United States forced Aristide to implement an IMF- and World Bank-designed structural adjustment program that entailed selling off state-owned enterprises, firing much of the civil service, slashing regulation, lifting import controls, and other typical neoliberal policies.

This contrasted with Aristide’s election platform, which propelled him to presidency in 1990, of enacting measures such as increasing the minimum wage, creating a pension system and improving public health and education. It also followed the murder of an estimated 3000-5000 of his supporters in the poor neighborhoods by the military and the FRAPH during its rule from 1991-94.

While the U.S. government officially condemned the coup and its leaders, and imposed sanctions on Haiti’s military junta, the Clinton administration used FRAPH as a negotiating chip with Aristide. Clinton’s Special Envoy to Haiti, Lawrence Pezzullo, told journalist Allan Nairn that FRAPH was “a political offset to Lavalas” and “as the bodies were starting to appear” “we said [to Aristide]: The only people seen operating politically now are the FRAPHistas.”

According to Nairn, Pezzullo had also said to Aristide and that he and the US had to “fill that gap with another force with the private sector—otherwise these FRAPH people will be the only game in town.”

For years, the U.S. government refused Haiti’s extradition requests for Constant. Following an outcry from New York’s Haitian community over the death squad leader’s arrival in Queens in 1994, the Immigration and Naturalization Services (INS) began deportation proceedings. Constant responded by publicizing his CIA links in a 1995 interview with CBS’s 60 Minutes.

In a series of articles in The Nation (Oct. 3, 1994 and Oct. 24, 1994), Nairn reported that FRAPH had been set up with CIA backing and financing, and Constant had received payments from the CIA, which used the death squad as a counter to popular democratic movements. In the wake of the added publicity about Constant’s CIA ties, the INS ceased deportation proceedings.