Every summer, Hollywood lights up the screen with the clash of heroes and villains. But this year, it seems there is a strange urgency. It was more than simple excitement at well-made movies — it felt like Hollywood was battling not our boredom, but our anxiety. For the past few years we’ve heard people suggesting that America’s time as the only superpower is coming to a close. Is that what’s behind these blockbusters? Do we want to be the sole global superhero again?

Our national mythology, in the words of former U.S. Secretary of State Madeleine Albright, is that we are “the indispensable nation.” But as our reasons for invading Iraq stand as naked lies, as India and China rise and Iran taunts us, we look more and more dispensable.

Against this troubling backdrop of U.S. decline, superhero movies, in the words of Freud, “split the ego.” In the theater, we take the hero’s journey and separate our troubled American identity into a good and bad one. The hero stands in for our ideal self, purified of excesses like greed or militarism, which we isolate in the villain. Hero and villain battle in the streets, tearing up streetlights, flipping over tractors. Of course, the hero wins and we leave the theater cleansed through an act of cinematic catharsis.

We see Iron Man build an armor of righteousness, the Hulk chased to the edge of his rage-triggered strength and Batman pursue a gothic justice. Watching the heroes smash flashy cars and fly between skyscrapers, one feels the movies satisfy a subliminal need. They justified U.S. violence with morality and re-affirmed our innocence. 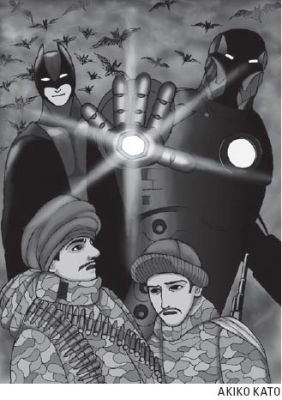 They do this because, long before he is a hero on the screen, he is us. Each of the summer’s champions begins as a muddled American. Tony Stark is a champagne-gulping, amoral playboy, Bruce Banner a mousy government technocrat and Bruce Wayne a clueless child. Each hero’s journey opens with a trauma that destroys him. Stark is captured and mortally wounded by Islamic warlords. Banner is soaked by gamma waves from his laboratory. Wayne sees his parents shot while they leave the opera. Each hero’s wound makes it impossible for him to be who he was before.

Over that wound, the hero pulls down the mask like a bandage of anonymity. His goodness is guaranteed by his suffering, which exposes him to the suffering of others. In their name, he wears an armored suit or impenetrable gamma-rage. So Stark becomes Iron Man and blasts Islamic warlords in order to free helpless Arab women and children. Banner, whose strength is triggered by victimization can, even as the Hulk, shield his ex-fiancé from the fiery explosions. And Batman guards the terrified people of Gotham against a multinational criminal underground anchored by a corrupt Chinese businessman.

In these movies it’s easy to see our anxiety about the Iraq War, Asian economic competition and gender roles being exorcised. More important, our myths teach us that our violence is justified by our pain. Is it any wonder that in the 2004 State of Union address, President Bush declared, “America will never seek a permission slip to defend the security of our country?” Our foreign policy reflects the vigilante justice we see in our movies.

Yet a subversive insight threads through these films. The dramatic friction at their core is not external threats, but the monster in the mirror. The final leg of the hero’s journey is when he turns to face the enemy within. Iron Man’s climatic battle is not with Islamic warlords; instead he tumbles through the street with his business partner Stane. The Hulk’s ultimate enemy is not the U.S. military, but rather a mercenary soldier who overdoses on gamma rays in a quest for glory. Batman’s nemesis is not the multinational criminal class, but the Joker, an American anarchist clown.

Hidden inside each movie is a perverse warning against our own excess. We see in the moral pyrotechnics an unintended lesson: We are our own enemy. I wonder, as the American audience learns to “re-split the ego” and our villainous side is killed or captured, in what form will it return?