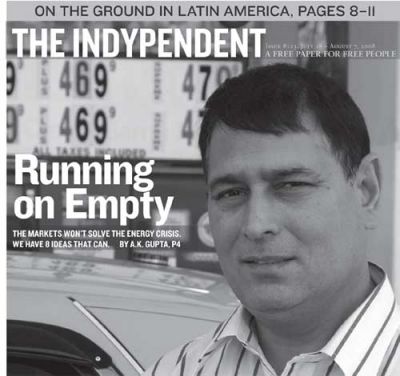 MORE THAN AN ECOLOGICAL CONCERN

Response to “Fighting for the Amazon,” July 18:

Big infrastructure projects like dams are not just issues of local ecological concern. The reason these projects are so aggressively pursued is that they underlie the whole global economy: without these projects, resources cannot be extracted, processed and shipped to the consumption-hungry First World. That means that wealthy, exploitative economies like the United States need these destructive infrastructure projects both overseas and domestically. It also means that if we can prevent them from being built, we can put pressure on the whole system and help to bring it down.

Response to “Who Will Turn Off the Lights? El Salvador’s Youth Exodus,” July 18:

Thank you Indypendent for giving El Salvador attention, but this article does a poor job of informing readers on how violent 2008 has been for youth and organizers. On June 26, student activist Ángel Martínez Cerón, coordinator of the January 24 Revolutionary Socialist Student Bloc, was murdered on the streets of the city of Santa Ana, shot nine times. Although the murder remains unsolved, he and his brother were harassed and arrested by the police days before. To stand as allies in NYC, we must know more than the facts and figures that Free Trade Agreements generate or we risk seeing heroes like Ángel as mere numbers.

Response to “Walking for the Earth,” July 18:

Now that energy resources are “drying” up, the U.S. government is looking for another quick fix. They don’t care how dangerous it is or what it’s after effects are, just as long as they can replace one pollutant with another. The other issue is they now want the land given to the Native peoples because the useless land that was originally given to them was actually rich in many fuels. Again, they want to move the Native peoples to other “useless” land that has been ravaged by white people. Everywhere the white man goes, he has destroyed the gifts that our Creator has given to us.