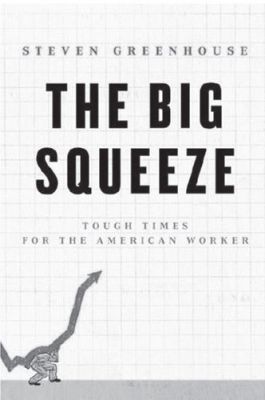 A review of The Big Squeeze By Steven Greenhouse Borzoi Books, 2008

Once upon a time, the major national newspapers had multiple labor correspondents covering strikes and the big contracts negotiated between industrial unions and the bosses. Today most newspapers have no labor reporters. New York Times correspondent Steven Greenhouse’s new book, The Big Squeeze, makes the case that the media should pay more attention to the plight of the working class and the labor movement.

Greenhouse’s expansive book takes a probing look into the American workplace with a slew of statistics and rage-inducing personal stories. We find legions of white- and blue-collar employees overworked, underpaid, outsourced, under- or uninsured and scared of the boss.

Greenhouse looks back with rose-colored glasses at the New Deal era, when corporations bought into the belief that well-paid workers fueled the consumer economy. He dates corporate America’s break of the social contract to 1981, when President Ronald Reagan fired 11,345 striking air traffic controllers and replaced them with nonunion workers.

In place of the New Deal, a neoliberal project emerged that favored free trade deals over protecting core American industries and cut labor costs to boost stock prices. But Greenhouse nails only part of the Wall-Street-over-Main-Street thesis. What Reagan began in 1981 was a wholesale reordering of the economy by emphasizing corporate profits and lower wages and benefits, culminating in the dismantling of the social welfare state. Reagan’s revolution came to fulfillment in the Clinton presidency. Clinton almost single-handedly negotiated away hundreds of thousands of industrial jobs in “free trade” deals like the North American Free Trade Agreement. His welfare-to-work programs got government off the hook for funding the safety net while creating vast pools of cheap labor. The low wage Wal-Mart economy was born.

Greenhouse lauds good corporate bosses like at Costco Wholesale Corp. who have plenty to say about Wal-Mart’s abusive labor practices, but he fails to understand the market forces that created the beast. Driving corporate America’s anti-worker attitude are the forces of globalization, which he describes as “the historical process in which nations and their economies are being bound ever more closely together.” However, “Wall-Street-over-Main-Street” is euphemistic for class war, and the globalization he describes is less an organic historical process than a calculated way to redistribute prosperity upwards.