A review of The Samaritan’s Dilemma: Should Government Help Your Neighbor? By Deborah StoneNation Books, 2008

Several years back, the arrival of a panhandler in Henniker, N.H., sent local residents into a tizzy. Should they help the guy or would giving him a cup of coffee, a sandwich and a couple of bucks encourage malingering, or worse?

The solution, said the town selectmen [sic], was to ignore this fellow human being. “If you give him food, he’ll become dependent,” they warned. “Other poor people will come to town,” they added, undermining self-reliance, gumption and hard work.

For Dartmouth professor Deborah Stone, the debate was a referendum on community, and as she watched and listened she repeatedly harkened back to the Biblical story of the Good Samaritan. In that tale, the injunction is clear: One should always offer help when it is needed. How had the townspeople of Henniker — virtually all of whom would define themselves as caring and moral — strayed so far from this model? 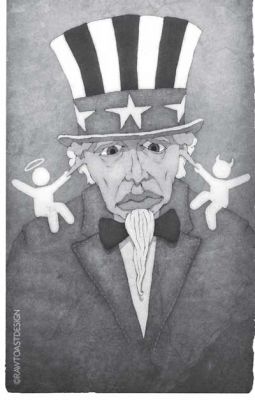 Sixty years ago, she writes, the man at the center of the brouhaha “would have been taken to the jail if there was one, or to an inn or private home if there wasn’t, and there he’d be fed. Thirty years ago, a local official might even have helped him sign up for food stamps or welfare. But now, feeding a hungry man would seem to be trouble waiting to happen.”

Stone rightly credits Ronald Reagan and the New Rightists who got him elected with promulgating a “help is harmful” mantra that both parties have since put forward. To wit, most Republicans and more than a few Democrats now argue against government aid. Their twisted rhetoric has been widely popularized: Social Security lets workers avoid saving for retirement; health insurance has people running to the doctor for minor ailments; bilingual education is a disincentive to assimilation; affirmative action encourages mediocrity; and welfare, well, you get the picture.

What it adds up to, Stone writes, is callousness, and it has a ripple effect. That is, when government is indifferent, individuals become hardhearted, modeling their behavior on the public policies and discourse that they encounter. Worse, when messages are constantly repeated — think Cadillac-driving welfare mama — they become ingrained in the body politic.

This bombardment causes us to distrust the poor and sidestep the person-to-person assistance that would have been assumed a century ago. At the same time, Stone believes that turning away from problems goes against human nature, that we have an innate desire to participate in altruistic efforts, whether they be food drives, delivering Meals on Wheels, tutoring children, or visiting the homebound. These dual pulls — to help or not to help — are at the heart of what Stone calls the Samaritan’s Dilemma.

To her credit, Stone wants to live in a society in which individuals are their neighbor’s keepers, forging bonds that cut across race, class, gender, sexuality, religion and ethnicity. What’s more, she believes government has a responsibility to encourage mindful behavior. However idealistic, it’s impossible to argue against.

At the same time, the volunteerism Stone champions — perhaps to excess — can only make a dent if government is a strong proponent of public welfare since it will take more than good will to eradicate racism or diminish the need for equitable school funding or national health insurance. Ultimately, it’s the government’s responsibility to feed, clothe and shelter those within its borders.

A Good Samaritan can offer a meal to a panhandler, but only the state can ensure that s/he eats on a regular basis.