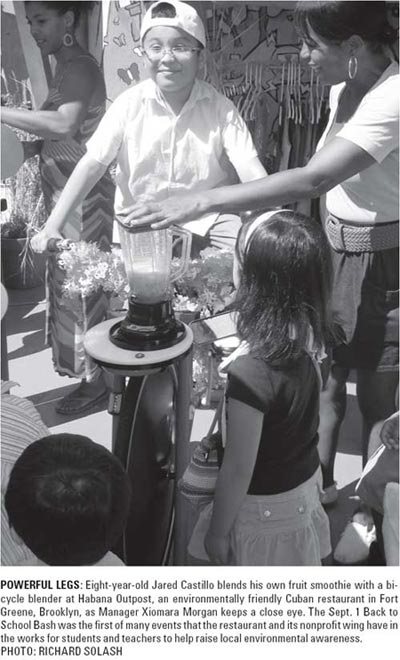 Jared Castillo is pedaling hard, but he isn’t going anywhere. On this bike, that’s the point. The potential energy stored in the muscles of his eightyear- old legs is converted to kinetic energy, sending the blades of a blender spinning. In a few seconds, Jared has made an electricity-free fruit smoothie, literally all by himself.

The bike blender — a cyclist’s version of a Cuisinart — has become a de facto logo of the Habana Outpost, the Fort Greene curiosity that is part Cuban restaurant, part nonprofit educational effort. The Outpost provides more than just fun and games. On Sept. 1, the final day before public schools opened across the city, the organization held its Back to School Bash. In its inaugural year, the event is just one example of the company’s newly energized effort to boost the environmental awareness of area students — and offer the green education that they may not be receiving in the classroom.

“This is a unique site in New York City,” said Kate Zidar, who recently became the first full-time director of Habana Works, the Outpost’s expanding nonprofit branch. “There have been a lot of pilot projects and research and advocacy, but the one really special thing at Habana is that we have the capacity to actually build.”

The “building” that Zidar speaks of is both physical and civic: owner Sean Meenan gives eco-conscious employees free rein to use the restaurant as a workshop for conservation ideas — the solar-powered cell phone charger in the courtyard, the rainwater collection unit on the roof — while free, family- oriented activities encourage community bonding. But now, under Zidar’s leadership, Habana Works is debuting new partnerships, a teacher forum and green opportunities for teens.

“It’s important for everyone to learn about environmentalism, but especially children,” said Zidar, standing in the herb-filled Kid’s Corner. “Before you have folks who are set in their ways, you have the opportunity to take it a step further. Also, when they’re young, they can learn really easily and then take a lot of the knowledge home as well, so they wind up educating their elders.”

Nearby, the former Master Composter at the Brooklyn Botanic Garden grabbed handfuls of moistened newspaper. Micki Josi, math teacher and cofounder of the New York City School Recycling Action Committee, returned to her dirt-loving ways at the Back to School Bash. She spent her day teaching middle schoolers how to make their own mini-worm-bins — small enough to fit under a sink, and effective in bringing composting into even the most cramped of city apartments.

“If eco-education is done ad hoc in schools, it won’t work,” said Josi. “If the Department of Education is actively pushing technology education, why can’t they do the same for recycling? Without the educational background, it doesn’t make sense for kids to recycle.”

Josi, who spent the previous day helping to convert plastic yogurt containers into cutlery, teaches at Middle School 447 in Boerum Hill, which offers a specialized environment-conscious curriculum. She chose to volunteer at the Labor Day event for the children and says she will continue to do so “until there are paid recycling coordinators in each school.”

Until then, Habana Works will be working to fill the gap. “Habana Academy,” a new weekly program that will run from October to December, will bring local teachers together for an information- sharing cocktail hour. There, they can discuss strategies for bringing environmentalism into the classroom and learn from guest speakers. They will also be introduced to the Habana facility itself, a potential class trip destination.

Habana is betting that teenagers will appreciate green opportunities too. “Working on an environmental project over the summer is definitely better than working at McDonald’s or getting into trouble,” says Zidar, who is arranging the new Break It Down internship program. With it, Habana is targeting a new age group, complementing its diverse offerings for younger children and its two-year-old Urban Studio Brooklyn program, which provides eco-friendly building experience to architecture and design students.

Teens will have their chance when the school year ends, but on the day before it began, elementary school students were the focus at Habana. Fort Greene mom Zakia Williams was one of the many who brought her children to the free event. Her two daughters, who attend nearby P.S. 20, spent most of the afternoon swarming around the beekeeping table.

“They’re afraid of the bees, but they are very curious and asking me a lot of questions,” said Williams, setting her roasted corn on a biodegradable plate. “This is their first green experience, and I think we’ll be back.”