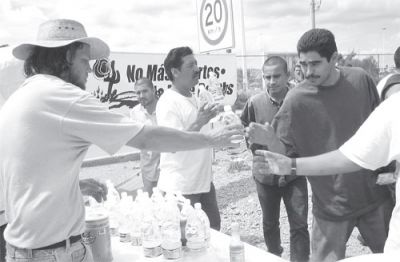 RELIEF ON THE BORDER: Humanitarian aid volunteers Jason Odhner and Gilberto Flores hand water bottles to thirsty migrants within sight of the U.S. border in outskirts of the Mexican city of Nogales, Sonora, in the summer of 2007. No More Deaths, a humanitarian aid organization based in Tucson, Ariz., has supported three aid stations in border cities that receive deported migrants dropped off at the ports of entry by U.S. Department of Homeland Security/Border Patrol officials. More than 350,000 migrants have received food, water and medical care at the aid stations since 2006. A delegation of No More Deaths volunteers spoke at a congressional briefing hosted by Rep. Raul Grijalva (D-AZ) in Washington, D.C, Sept. 17 regarding human rights abuses of migrants in short-term custody by U.S. Border Patrol. Humanitarian aid workers staffing the stations heard stories from migrants of abusive treatment during their apprehension, transportation and processing by Border Patrol. More than 400 individual accounts of abuse documented over the past two years have been compiled into a new report, “Crossing the Line.” The report can be found online at nomoredeaths.org.