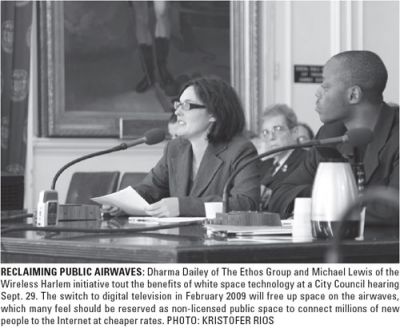 In late October, the Federal Communications Commission (FCC ) will decide on an issue that could completely change how you talk on the phone and connect to the Internet. They are weighing what to do with the “white spaces,” which are unused TV channels and spaces in between channels.

With the switch to digital television (DTV), which every broadcaster must do by Feb. 17, 2009, the signals do not need as much padding to keep from interfering. The freed up space is a digital dividend.

The government already auctioned off most of this dividend to Verizon and AT&T, but the smaller white spaces in between active channels are a little harder to use.

Still, those small spaces can add up. After the DTV transition, one-fifth of the available channels in New York City will be vacant, according to a study by the media reform organization Free Press. And New York has among the most crowded airwaves in the country. The available space in smaller cities and rural areas is far larger.

If we opened up this part of the airwaves for portable, low-power devices — in rural areas, it could be fixed, higher-powered signals — we could connect millions of new people to the Internet for far less than what we now pay. In a city like New York, those portable devices could even take the place of our expensive, never-quite-work-how-you-want-them-to cellular phones.

The City Council Committee on Technology in Government held a hearing on white spaces Sept. 29 to consider a resolution urging the FCC to hold back from opening white space devices.

They used the same “ocean of interference” canard to limit low-power radio licensing in 2000, until an FCC study showed the claim to be unfounded. The FCC is currently conducting tests to ensure that white space devices would not interfere with other signals.

Others who use these airwaves without a license, like Broadway shows and music venues that rely on wireless microphones, who are currently operating illegally, would like to become authorized, protected users.

At the hearing advocates for expanded access to the Internet, including NYCwireless, Wireless Harlem, The Ethos Group, Free Press and Common Cause, criticized the resolution. There is no word yet on when the Committee will vote on it.

FCC certification of white space devices is the most significant step we could take towards closing the digital divide, and it wouldn’t cost us a dime — or, rather, it would cost us a dime less than what we’re paying now for Internet access and cell phone service.

Wireless access is not a full replacement for wired connections, but it is a much cheaper way to bring people the Internet. Mobile phones are far more widespread than in-home computers with broadband connections, especially among the groups currently marginalized from the Internet. According to the Pew Internet and American Life Project, African Americans and English-speaking Hispanics are more likely than white Americans to use cell phones or other hand-held communication devices to access the Internet.

Once you don’t have to rely on big, corporate license-holders to get a connection, you can start to invent entirely new devices and applications. The FCC used the same kind of open platform for innovation with the 2.4 gigahertz band. That led to an astounding array of inventions — cordless phones, remote controls, microwave ovens, and wi-fi routers — all sharing one tiny piece of the airwaves.

With access to the white spaces, the sky’s the limit.

For more information and to learn what you can do to open the airwaves, visit speakandlisten.net.