QUITO, Ecuador—Ecuador approved a new constitution on Sept. 28 with a 64 percent “yes” vote, scoring a major victory for President Rafael Correa. Correa hailed the results, saying that “today Ecuador has decided on a new country.” Constitutional provisions expand access to healthcare, social security and education while increasing state control over the economy.

Nearly 10 million Ecuadorians came out to vote — voting is obligatory — and the atmosphere was tranquil. Families quietly walked into polling places and quickly walked out. The only lines in Quito were at the ubiquitous food stands selling roast pork or sugar cane juice.

The vote on the constitution was also very much a referendum on Correa’s presidency. Correa has maintained high approval ratings by seizing the property of elites responsible for a severe 1999 banking crisis, increasing public assistance funding and terminating the U.S. lease on the coastal military base in Manta. Staying in office is no small feat in a country where popular mobilizations, fueled by opposition to Washington-backed freemarket economic policies, have overthrown three presidents since 1997.

The vote was a major blow to an already fragmented opposition. The Catholic Church and evangelicals bolstered the weakened traditional political parties’ “no” campaign, charging that the constitution would legalize abortion and gay marriage. While the new constitution does legalize same sex civil unions, there is no indication that it will allow for restrictions on abortion to be relaxed. Bishops allied with the extreme right-wing Opus Dei, led by Archbishop Antonio Arregui, control the church hierarchy. But the leadership’s position provoked widespread resistance among progressive lay activists and clergy who are powerful in many parts of the heavily Catholic country.

Business leaders also criticized the constitution, saying that it would give the state excessive control over the economy and endow the president with authoritarian powers.

In a serious upset, nearly 50 percent of the residents in the opposition stronghold of Guayaquil appear to have supported the constitution. The port city, like much of the coast, has long been controlled by export-oriented business owners.

Mayor Jaime Nebot, allied with the conservative Social Christian Party, has been Correa’s most high-profile opponent. Nebot had threatened to resign if the “yes” vote won in Guayaquil, urging his supporters to reject the proposal. It seems doubtful he will follow through on his threat, however, as he continues to enjoy high approval ratings. In his victory speech, Correa called for national unity and said that he was open to a dialogue with Nebot.

Most social movements supported the constitution, pointing to expanded indigenous rights, social welfare policies and environmental protections. But Correa has also come into increasing conflict with the country’s left, which charges that his radical discourse is mere window dressing. Led by the Confederation of Indigenous Nationalities of Ecuador (CONAIE), the left is unhappy with Correa’s support for large-scale mining and other policies that they see as too friendly to big business and foreign investors.

The conflict recently intensified when former Assembly Member Monica Chuji disaffiliated from Correa’s Alianza País party. Chuji is an indigenous activist and was Correa’s spokeswoman before her election to the Constituent Assembly, the body that drafted the constitution. And in late September, CONAIE President Marlon Santi warned of an indigenous uprising against mining activities. He stated that indigenous and anti-mining organizations will meet in the southern highlands city of Cuenca on Oct. 13 to discuss potential actions.

And in a surprise move, Correa on Sunday publicly appeared with former President of the Constituent Assembly and longtime social movement ally Alberto Acosta. Acosta and Correa had a falling out in June over procedural matters and substantial political differences. But with Correa empowered and the traditional right weakened, it is unclear whether social movements will be successful in reasserting an independent political project.

Daniel Denvir is editor-in-chief of caterwaulquarterly. com. This article was originally published on upsidedownworld.org. 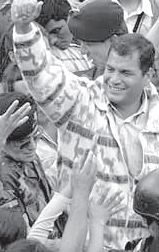 In the port city of Guayaquil, exit polls first reported a serious upset, indicating that nearly 50% had voted in favor of the constitution. The final results, however, showed that the “no” vote won by less than a percentage point. The metropolis is an opposition stronghold and, like much of the coast, has long been controlled by the owners of wealthy export businesses. Mayor Jaime Nebot, allied with the conservative Social Christian Party (PSC), has been Correa’s most high-profile opponent. Nebot had threatened to resign if the “yes” vote won in Guayaquil, urging his supporters to reject the proposal. Pierina Correa, the president’s sister and an Alianza País leader in Guayas province, said that the vote demonstrated that the city was divided. Nebot, in contrast, called for Ecuador to “respect Guayaquil’s decision.”