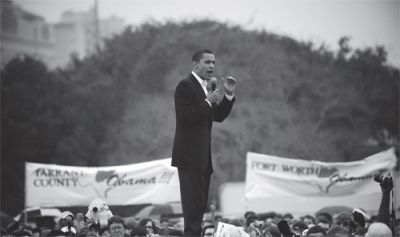 An Obama Victory Would be a Milestone, but Could Stall Struggles Against Racism

Forty-one years ago, racial tensions — festering since slave times — burst into the Long Hot Summer in the tristate area. Thirty-four died in Newark, but the most dramatic upheaval came from Plainfield, N.J., a quiet suburb 30 miles from New York City. Amid minor but widespread skirmishes spreading across the region, a lone police officer beat and shot a black youth in the boy’s neighborhood. The boy survived, but the cop, quickly surrounded by enraged community members, did not make it out of the neighborhood alive.

Ashanti Alston, a political prisoner activist with the Jericho Movement and former Black Panther who was a teenager in Plainfield at the time, traced the escalating plot for The Indypendent. “The thing about Plainfield that stood out from all the other rebellions was that folks made their way to a gun manufacturing place right outside of the city,” Alston says. “They came back to the community with rifles and it was a whole different ball game. It wasn’t until the National Guard came that they were able to retake the black community.”

Today, decades later, why does racial conflict no longer generate the same kind of heat? Not for lack of ignition. In Queens in November 2006, an undercover vice operation turned into an execution. A 50- shot cop fusillade killed Sean Bell, a young black man heading home on his final night as an unmarried man, and injured two of his friends, all unarmed. The murder won state sanction in April 2008, when a New York State Supreme Court judge accepted at face value the officers’ contention that they feared for their lives, making their killing fully legal.

The verdict generated both outrage and despair. Hundreds of people marched that afternoon and “Justice for Sean Bell” signs sprang up throughout the boroughs. But an Al Sharpton-led civil disobedience action in June that might have been the first in a line of battles instead turned out to be the denouement. Things died down.

It’s increasingly popular to argue that the fuel for unrest has disappeared because the problem of racism has receded into America’s past. This idea has long held sway on the right, but, paradoxically, it’s taken Barack Obama’s candidacy to elevate this persistent right-wing myth into conventional wisdom.

CIVIL RIGHTS UNFULFILLED
“The history he [Obama] needs to know is the history he rejects,” says Lenore Daniels, editorial board member of the Black Commentator, a weekly online magazine. “He rejects the whole Black Power movement: ‘Just the civil rights were fine, we’ll leave it at that, there was progress.’ [But] the Black Power movement is still relevant. That was a movement talking about economic equality, where King left off.”

Histories of struggles are written by the victors. The movements of 40 years ago had winners and losers and, like any war, are remembered more ideologically than objectively. The Civil Rights Act of 1964 ended Jim Crow and for the first time in U.S. history granted black people formal equality before the law, but failed to transform their lives day-to-day. After 1965, all wings of the movement turned to address this gap: King turned from law and morality to economics; Malcolm X’s militancy spread despite his assassination, Black Power was born, and the movement moved north.

Obama’s view of a united, post-racial America is in the tradition of how the political establishment — Democrat and Republican — responded to heightened militancy. There was forceful repression, but also a more subtle, ideological response. The language of Jim Crow segregationism gave way to political correctness and new coded terms like “war on drugs.” Those who were never allies of the oppressed lauded King and proclaimed the end of discrimination. And black elites, once viewed with suspicion, were welcomed to the table as long as they left their baggage behind. It was unsparing market capitalism for the rest of the community.

The result, as Columbia University historian Manning Marable puts it, is that “Jim Crow no longer existed, but in its place stood a far more formidable system of racial domination, rooted within the political economy and employing a language of fairness and equality.” Racism in America may not look like all-white police forces, dogs on black men or sound like speeches by white supremacist politicians. It’s more like a termite- infested house — political correctness and black representation in business, media and politics compose a nice-looking picture on the outside. But gashes in the façade expose structural disparities as racially aligned as ever. Statistical measures on rates of poverty, housing, employment and income are not far removed from their 1960s levels.

BLACK AND WHITE
At times, Obama sounds more like Richard Nixon than someone concerned with racism. At the 1968 Republican National Convention Nixon proclaimed, “To those who say law and order is the code word for racism, here is a reply: Our goal is justice for every American.” Obama’s response to the persecution of the Jena 6 nearly 40 years later sounded a similar note: “Outrage over an injustice like the Jena 6 isn’t a matter of black and white. It’s a matter of right and wrong.”

Obama did not dwell on the marks of racism, so clear to many of us, in the demography of disaster left by Hurricane Katrina. “I do not subscribe to the notion that the painfully slow response of FEMA and the Department of Homeland Security was racially based,” he said. “The ineptitude was color-blind.” And Obama did not object to the Sean Bell ruling, saying, “The judge has made his ruling, and we’re a nation of laws, so we respect the verdict that came down.”

Obama’s candidacy is seen as an indication that racial barriers no longer exist in the United States. Indeed, the election of a black president would be an undeniable milestone in American history, forcing many white Americans to confront latent fears and distrust of black people. And many see progress in the fact that a black man can run a campaign in which race is incidental. Yet it’s taken Obama’s embrace of post-racialism, and concurrent distancing from traditional civil rights-style black leadership, to lend viability to his campaign. Some activists see him as the culmination of a trend over the last 40 years of black leaders moving away from the communities they’ve traditionally served and closer to the political and corporate power that dominates the Democratic Party.

MOVEMENT POLITICS VS. ELECTORAL POLITICS
Alston feels that since the 1970s, the face of mainstream black activism has moved from a base in communities to big money and corporate sway. “No longer do you have the real radical movement folks that were coming out of grassroots movements,” Alston says. “You have people tied to money, or tied to established political power. What I look at today is that the Sharptons, the Barack Obamas, the Jesse Jacksons and even a lot of these mega-preachers now are not leaders from the grassroots. They’re system leaders that were chosen by either political forces or corporate forces.”

After attending Columbia University, Obama put in three years as a community organizer working on a range of neighborhood issues in the largely black Southside of Chicago. But his trajectory afterward — Harvard Law School and a stint as a law professor at the University of Chicago — looks more like the record of black politicians rising up in municipal politics in the 1980s and 1990s than the résumé of earlier leaders like King, Stokely Carmichael or Angela Davis. As he entered politics, he increasingly relied on allies culled from the Chicago elite — after the 2000 Census, he had his state senate district redrawn to make it, according to Ryan Lizza of The New Yorker, “wealthier, white, more Jewish, less-blue collar and better educated.” The connections he cultivated with his new well-to-do constituents were vital to his successful 2004 campaign for a U.S. Senate seat.

As Democratic dominance of national-level black politics accelerated, communities’ sense of action eroded into the passive live-with-your-fate mode that presently defines U.S. democracy. “When we go back to the 1950s and 1960s,” Alston says, “that was the period when people were not relying on the Democratic Party, the party that black folks are so tied to [today]. People were in the streets, people voted through their civil disobedience and direct action and organizing.”

The key question is whether much of the agenda in the fight against racial inequality remains unfulfilled. If so, there’s plenty to drive modern-day movements, taking outrages like the Sean Bell verdict to illuminate the living economic inequality untouched by 1960s activism. If not, then what happened to Sean Bell is just an aberration that could have happened to anyone, of any class and any race, in a country that has finally fulfilled its egalitarian ideals. That may be an America to hope for, but it’s not the one we have today.