As Wall Street experiences a financial catastrophe and thousands of New Yorkers worry about the economic fallout, the city’s Haitian community remains focused on a disaster of a different kind. Haiti has been hit by three hurricanes and a tropical storm in a span of three weeks. That has left Haitians in New York, already struggling in a worsening economy, scrambling to help relatives back home.

New York City resident Pierre Zamor, a Haitian native who lost his construction job six months ago, says he is picking up odd jobs trying to both make enough money to survive in the city and send money back home. 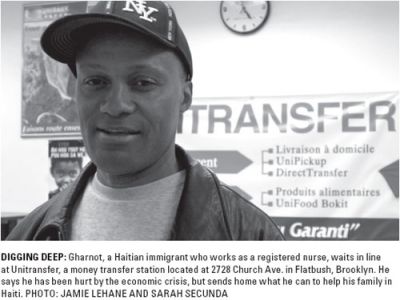 “I send food, but it’s not enough. It’s hard for me too,” Zamor says while sitting at a popular coffee shop on Nostrand Avenue in Brooklyn with fellow Haitian construction workers talking about the problems facing Haiti. Without a steady job, he’s just getting by. “One day you have, one day you don’t,” he says.

Despite the difficult economic times, Haitians say they feel a sense of duty to help those in greater need. The storms killed approximately 800 people and left 800,000 homeless in a nation of nine million.

City Councilman Mathieu Eugene, who helped organize a food and clothing drive for victims of the hurricanes, recognizes that Haitians in New York have been hard hit by the faltering economy. “Haitians want to realize the American Dream,” he says, however, “a lot, a lot of Haitian homeowners are going into foreclosure.”

At the best of times, Haitians depend on the generosity of relatives overseas who sent back $1.65 billion in 2006, according to a study commissioned by the Inter-American Development Bank. That’s equivalent to 35 percent of Haiti’s gross national product. These transfers are a lifeline for Haiti’s nine million people who the United Nations estimates mostly live on less than $2 a day. Earlier this year, riots brought on by food shortages forced the resignation of Prime Minister Jacques-Édouard Alexis.

More than $1 billion of the annual remittances come from Haitians in the United States. At the corner of Church Avenue and Lloyd Street in Flatbush — which is home to the city’s largest Haitian community — three remittance stores with signs in Haitian Creole promise speed and reliability.

On a recent weekday in October, a steady stream of people made their way on foot and by car to line up at the counters of those three stores — CAM, Unitransfer and Soca Transfer — to send help to loved ones in need. As the day progressed, the lines grew as people came from their jobs.

Yolette (who wouldn’t give her last name), walked out of Unitransfer with her two daughters, holding a receipt for the $150 in cash and the rice she had arranged to be sent to Haiti. Yolette said that she and the other customers had just been talking about their fears that too often donations sent to Haiti are stolen by crooked officials.

Sending money and supplies through money transfer stores, she said, was one way to avoid that. Yolette was taking no chances, she had arranged for a friend, a police officer in the capital, Port-au-Prince, to pick up the food and money and deliver it to people in Gonaives. The town of 300,000, which experienced the worst of the flooding, has been devastated.

People who work at the money transfer stores say donations have increased since the hurricanes started battering Haiti in August, despite the declining economic fortunes of many Haitians in the city.

“They are getting calls from family,” said William Regis, manager of Soca Transfer. “Every week they compromise themselves. Instead of sending once a month, they are sending two or three times a month, even if it’s just a little more.”

For Pierre-Joseph Cadet, a construction worker with two children in college, the logic is simple.