The election of President-elect Barack Obama is a historic moment pinned between an energizing rhetoric and a dire reality. To help put the occasion in perspective, The Indypendent reached out to renowned U.S. historian Howard Zinn, author of A People’s History of the United States.

The Indypendent: Since its inception, the United States has experienced vast social changes that are often oversimplified in history books as the projects of politicians and the product of presidents. How does change actually occur and what can be learned from these collective moments in history?

Howard Zinn: Significant changes occur when social movements reach a critical point of power capable of moving cautious politicians beyond their tendency to keep things as they are — or when these movements, by direct action, bypass the political system and bring about change by acting directly on the obstacles to change. When the anti-slavery movement reached its height in the late 1850s and early 1860s, it pushed President Abraham Lincoln toward the Emancipation Proclamation and pushed Congress toward the 13th, 14th and 15th Amendments. When the labor movement became militant and called strikes all over the country in the 1880s, it won the eight-hour day directly from employers without the 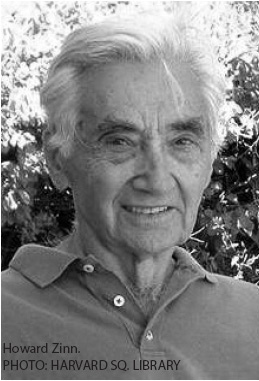 actions of government. In the 1930s, the strike and the growing labor movement pushed President Franklin D. Roosevelt into the New Deal reforms — minimum wage, Social Security, subsidized housing, etc. When black people protested and demonstrated all over the South, bringing about scenes that shocked the nation, then we got the Civil Rights Act of 1964 and the Voting Rights Act of 1965. But before that legislation, militant black protesters desegregated lunch counters and began to change the South by direct action. The movement against the war in Vietnam reached the point where it could not be ignored, where the direct action of deserting GIs, angry veterans and draft resisters created an atmosphere in which the government could no longer count on the support of the American people — and then the government began to move gradually toward ending the war.

The Indy: Obama has inspired a “hope” and energy among millions of people that has not been seen in decades. Do you believe this grassroots activity is actually a sign of a growing social movement? Have grassroots movements centered around electoral processes resulted in large-scale change in the past?

HZ: The new energy and enthusiasm have the potential of a new movement, but if they stop on Election Day that will not be enough. Too often the diversion of energy into electoral campaigns saps the movement’s energy. This happened in 1896 when the Populist movement supported the Democratic candidate, William Jennings Bryan, and when he lost, the movement fell apart. Even if he had won, the movement would have had to sustain its momentum for a Bryan administration to bring about change.

The Indy: What will Obama need to do to ensure that his presidency results in transformational change?

HZ: Withdraw troops from Iraq and Afghanistan as fast as ships and planes can carry them home, declare that the United States will not engage in aggressive wars, renounce the Bush doctrine of preventive war and the Carter doctrine, which threatens force to control Mideast oil, and start dismantling our military bases overseas. He should announce that we are henceforth a peace-loving nation, no longer a target for terrorists and no longer engaging in terrorism ourselves. He should reduce the military establishment and the military budget down to a bare minimum and create a jobs program for young people instead of recruiting them for military service.

The Indy: How should Obama fundamentally address the economic crisis?

HZ: We have a historic and successful precedent. The government in the early days of the New Deal put millions of people to work rebuilding the nation’s infrastructure. Hundreds of thousands of young people, instead of joining the army to escape poverty, joined the Civil Conservation Corps, which built bridges and highways, cleaned up harbors and rivers. Thousands of artists, musicians and writers were employed by the WPA’s arts programs to paint murals, produce plays, write symphonies. The New Deal (defying the cries of “socialism”) established Social Security, which, along with the GI Bill, became a model for what government could do to help its people.

This is a golden opportunity for Obama to distance himself cleanly from the fossilized Democratic Party leaders, giving life to his slogan of change. And if he doesn’t act, it will be up to the people, as it always has been, to raise a shout that will be heard around the world — and compel the politicians to listen.