Chapel of Sacred Mirrors: Visionary Artists Hope to Transform Society
VISIT THE CHELSEA EXHIBIT BEFORE IT CLOSES ITS DOORS JAN. 1

On the fourth floor of a building nestled between the buzz of Manhattan and the Hudson River on West 27th Street, an artist couple is attempting to transform society.

For more than four years, Chapel of Sacred Mirrors (CoSM) has exhibited the mystical artwork by Alex Grey, a spiritual and visionary artist whose paintings exploring the mind, physical body and spirit have inspired thousands around the word.

“The Chapel of Sacred Mirrors takes an integrative approach to creativity and spirituality,” said Alex’s wife Allyson Grey in an email to The Indypendent. “The arts are put to the service of higher consciousness.” The exhibit space includes an art gallery, chapel, yoga studio and community space for creative and social gatherings. 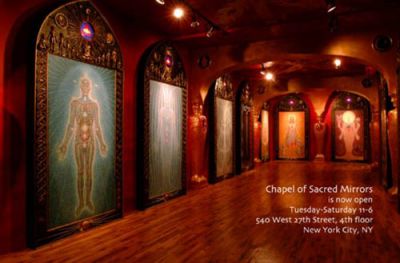 CoSM has become the base for a growing and diverse trans-denominational progressive community who believe the means to addressing economic, social and environmental crisis can only be accomplished by searching within. “CoSM is part of a growing force in the world that holds a vision of a peaceful planetary civilization based on the values of cognitive liberty and environmental responsibility,” Allyson said.

Life-sized human painted images examine the anatomy of the body and the physiology of the mind and spirit through radiant explosion of color, an obsession with detail, symbolic imagery and complex grids. First exhibited at the new Museum in New York City in 1986, The Sacred Mirrors — a series of 21 framed images (19 paintings and two etched mirrors) created by Alex — present the visitor a chance to literally see into his or her body in an experience of looking within. The visitor views the works in a procession, watching the body reveal itself differently in each frame. A study of our skeletal, cardiovascular and nervous systems leads towards the final works exploring the human psychic and energetic realms.

“When I first saw the art, I had a sense of homecoming,” said Rabbi David Ingber at the Oct. 2 four-year anniversary fundraiser. “This is art that is looking at me as I am looking at it.”

According to cosm.org, “The Sacred Mirrors dramatically reveal the miracle of life’s evolutionary complexity, the unity of human experience across all racial, class and gender divides, and the astonishing vistas of possibility inherent in human consciousness.”

Alex’s artwork has been central to bringing together a diverse community, including atheists, New Agers, counter-culture radicals and people identifying with various traditional religions. “When beings come together in oneness, it creates sacred space,” said Alex Oct. 2. “Building sacred space is an effort of a community.”

When asked how the current political and economic situations influence their art and what can be learned from their work to affect contemporary issues, Allyson pointed to the role artists can play in working for political and social change.

“It is growing ever more important for artists and all creative people to take a stand,” Allyson said. “Through creativity and our powers of imagination, alienated cultures will come to respect one another, healing divisions between societies and inspiring transformation.” 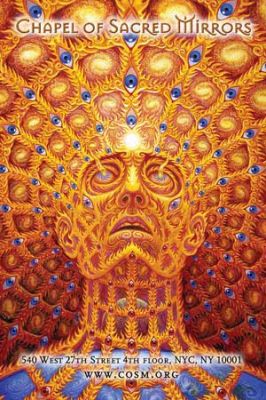 The Chelsea chapel, however, plans to close its doors January 1 in order to relocate to the Hudson River Valley 65 miles upstream. CoSM has purchased 40 acres of land in the town of Wappinger, New York, and plans to fulfill its mission by building “a sanctuary of the universal spirit” by constructing a retreat and education center with a “trans-denominational temple of art.”

“Our mission is to create an enduring sanctuary to celebrate creativity, love and liberation,” Allyson said. “The essential element of planetary survival for our species is environmental justice. CoSM can inspire people by sharing visions that draw humanity toward a passion for earth honoring and an imperative for each generation to leave the earth a better place.”
—
The Chapel of Sacred Mirrors located at 542 West 27th Street, Fourth Floor. The exhibit is open Tuesday through Saturday, 11am-6pm. Admission $5. Several creative, spiritual and musical events are planned throughout December, including the New Year’s Eve Grand Finale celebration. For more information, visit cosm.org.