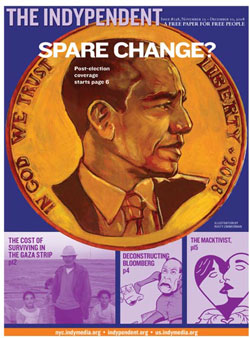 DEMS NOT ABOUT CHANGE

Response to “Change We Can Really Believe in,” Nov. 17:

What fundamentally prevents President-elect Obama from fulfilling expectations of “change” at home and abroad is that the Democratic Party is not in essence a left-wing party that believes in radical change. Democrats do not fundamentally oppose the death penalty or the Second Amendment. This is far removed from left-wing philosophy around the globe, whether it be in Europe or in Latin America. —Elianita55

Even though I didn’t vote for Obama, I am truly glad that he gives hope to millions of my fellow Americans. … Our nation has finally elected a President who is a man of color. By his election, to me it seems that we, as a nation, have finally reached a point to where the playing field is level … the bickering, whining, the oppression boo-hooing, “the man is keeping us down” talk needs to cease. Whether you voted for him or not, we need to embrace him, stand behind him, and roll up our sleeves and get to work on getting our nation back on course as the greatest nation on Earth.
—K.T.

There’s a deeper issue here. If they [the mainstream media] talked about what McCain and Obama actually believed in, policy-wise, it would soon be clear that they are damn near identical! Thus the focus on scandals is to better obscure just how similar the two parties of Corporate America really are.
—Gregory A. Butler

SOMEONE’S GOT TO BE THE BAD GUY

Response to “Election Day will Not Be Enough: An Interview with Howard Zinn,” Nov. 17:

Isn’t the Military Industrial Complex, the wars we wage, the bases we hold, the wars started by other countries that we perpetuate with weapons sales the only thing that ensures our position as world power? If we divest from that practice wouldn’t some other imperialist government take over where we left off and perhaps insure their position by destroying the United States?
—Kenny