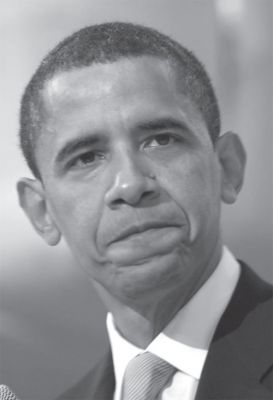 U.S. policy is not about one individual, and no matter how much faith people place in President-elect Barack Obama, the policies he enacts will be fruit of a tree with many roots. But the best immediate indicator of what an Obama administration might look like can be found in the people he surrounds himself with and who he appoints to his Cabinet. And, frankly, when it comes to foreign policy, it is not looking good.

Obama has a momentous opportunity to do what he repeatedly promised over the course of his campaign: bring actual change. But the more we learn about who Obama is considering for top positions in his administration, the more his inner circle resembles a staff reunion of hawkish, oldguard Democrats of the 1990s. Even more disturbing, several of the individuals at the center of Obama’s transition and emerging foreign policy teams were top players in creating and implementing foreign policies that would pave the way for projects eventually carried out under the Bush/Cheney administration. Here’s a few of the members who will help shape U.S. foreign policy for at least four years.

Much has been written on Biden’s tenure as head of the Senate Foreign Relations Committee, but his role in the invasion and occupation of Iraq stands out. In the summer of 2002, when the United States was “debating” a potential attack on Iraq, Biden presided over hearings whose ostensible purpose was to weigh all existing options. Biden’s hearings treated the invasion as a foregone conclusion. His refusal to call on two individuals in particular ensured that testimony that could have proven invaluable to an actual debate was never heard: Former Chief U.N. Weapons Inspector Scott Ritter and Hans von Sponeck, a 32-year veteran diplomat and the former head of the U.N.’s Iraq program.

Founder of the Washington Institute for Near East Policy, Indyk spent years working for the American Israel Public Affairs Committee and served as Clinton’s ambassador to Israel and assistant secretary of state for Near East affairs, while also playing a major role in developing U.S. policy toward Iraq and Iran.

Clinton’s former national security advisor, Lake began his foreign policy work in the U.S. Foreign Service during Vietnam, working with Henry Kissinger on the “September Group,” a secret team tasked with developing a military strategy to deliver a “savage, decisive blow against North Vietnam.” Decades later, after working for various administrations, Lake “was the main force behind the U.S. invasion of Haiti in the mid-Clinton years,” according to veteran journalist Allan Nairn, whose groundbreaking reporting revealed U.S. support for Haitian death squads in the 1990s.

Former Assistant Secretary of State Susan Rice, who served on Clinton’s National Security Council, was nominated as Obama’s ambassador to the United Nations. She, like Secretary of State-designate Hillary Clinton and others at the top of Obama’s foreign policy team, promoted the myth that Saddam Hussein had weapons of mass destruction (WMDs). Rice has also been a passionate advocate for a U.S. military attack against Sudan over the Darfur crisis.

A longtime CIA official and former head of the National Counterterrorism Center, Brennan is one of the coordinators of Obama’s intelligence transition team and, until he recently withdrew his name from consideration, was a top contender for either CIA director or director of national intelligence. He was also recently described by Glenn Greenwald as “an ardent supporter of torture and one of the most emphatic advocates of Foreign Intelligence Surveillance Act spying expansions and telecom immunity.” Brennan has described the CIA’s extraordinary rendition program — the government-run kidnap-and-torture program enacted under Clinton — as an absolutely vital tool.

Miscik, who works alongside Brennan on Obama’s transitional team, was the CIA’s Deputy Director for Intelligence in the runup to the Iraq War. She was one of the key officials responsible for sidelining intel that contradicted the official line on WMDs, while promoting intel that backed it up.

A former senior Clinton advisor, Emanuel is a hard-line supporter of Israel’s “targeted assassination” policy and actually volunteered to work with the Israeli Army during the 1991 Gulf War. He voted for the invasion of Iraq and, unlike many of his colleagues, Emanuel still defends his vote. As Philip Giraldi recently pointed out on Antiwar.com, Emanuel “advocates increasing the size of the U.S. Army by 100,000 soldiers and creating a domestic spying organization like Britain’s MI5.” Under Clinton, Emanuel was one of the key people to helped pass the North American Free Trade Agreement.

Flournoy and former Clinton Deputy Defense Secretary John White are co-heading Obama’s defense transition team. Flournoy was a senior Clinton appointee at the Pentagon and currently runs the Center for a New American Security (CNAS), a center-right think-tank. As the Wall Street Journal recently reported: “While at CNAS, Flournoy helped to write a report that called for reducing the open-ended American military commitment in Iraq and replacing it with a policy of ‘conditional engagement’ there.”

With the assistance of his foreign policy team, Obama has already charted out several hawkish stances. Among them:

His plan to escalate the war in Afghanistan;

An Iraq plan that could turn into a downsized and rebranded occupation that keeps U.S. forces in Iraq for the foreseeable future;

His labeling of Iran’s Revolutionary Guard a “terrorist organization”;

His pledge to use unilateral force inside Pakistan to defend U.S. interests;

His position, presented before the American Israel Public Affairs Committee, that Jerusalem “must remain undivided”;

His plan to continue the “War on Drugs,” a backdoor U.S. counterinsurgency campaign in Central and Latin America;

His refusal to “rule out” using Blackwater and other private armed forces in U.S. war zones, despite previously introducing legislation to regulate these companies and bring them under U.S. law.

This article was adapted from, “This is Change? 20 Hawks, Clintonites and Neocons to Watch for in Obama’s White House,” published on alternet.org Nov. 20.

Even saddled with a two-front, budget-busting war and a collapsing economy, President-elect Barack Obama may be able to accomplish a lot. For all the rolling up of sleeves and “everything is going to change” exuberance, however, taking on the Pentagon, with its mega-budget and its mega-power, may be the hardest task he faces.

To cut the military budget deeply means taking on something fundamental and far-reaching: America’s place in the world. It means coming to grips with how we garrison the planet, with how we use our military to project influence and power anywhere in the world, with our attitudes toward international treaties and agreements, with our vast passels of real estate in foreign lands, and, of course, with our economic and political relationships with clients and competitors.

As a candidate, Obama stirred our imagination through his calls for a “new era of international cooperation.” The United States cannot, however, cooperate with other nations from atop our shining Green Zone on the hill; we cannot cooperate as the world’s sole superpower, policeman, cowboy, hyperpower, or whatever the imperial nom du jour turns out to be. Bottom line: we cannot genuinely and effectively cooperate while spending more on what we like to call “security” than the next 45 nations combined.

A new era in Pentagon spending would have to begin with a recognition that enduring security is not attained by threat or fiat, nor is it bought with staggering billions of dollars. It is built with other nations. Weapons come second.

Frida Berrigan is a Senior Program Associate at the New America Foundation’s Arms and Security Initiative and a columnist for Foreign Policy in Focus. This was excerpted from the article, “Weapons Come Second: Can Obama Take on the Pentagon?” published Nov. 25. 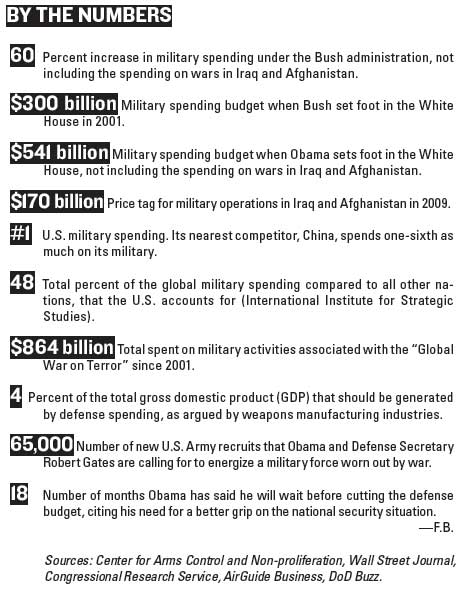