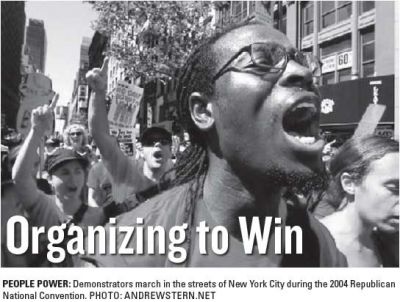 Barack Obama’s election seems to have dispelled some of the despair that grew up in the repressive war-making aftermath of September 11 and the subsequent invasion of Iraq and Bush’s re-election. This is good for organizing — people step up out of hope, not despair. Many of us who have a deep critique of Democrats, political parties and politicians, however, are left conflicted or confused. Whether we will see the opening of a space for real positive changes or an era in which movements and resistance get co-opted depends on whether and how we organize — and if we learn key lessons from past global justice (and other) organizing and understand how Obama’s campaign (and the independent efforts for Obama) communicated, organized and inspired.

Here are five lessons that I learned from reflecting on the Seattle World Trade Organization meeting shutdown nine years ago and grassroots campaigns against war and corporate globalization since:

We cannot afford just to target the symptoms of the system or organize around single issues. Organizing with a holistic framework provides a convergence space where everyone who fights against the system (capitalism, empire, imperialism, neoliberalism, etc.) and its effects on our communities can make common cause. This overarching framework helps globally focused activists to anchor their work in local struggles against the impact of the global system (like workers’ rights, environmental justice, and anti-privatization fights) and local organizers to reframe their struggles within their global context (anti-corporate globalization), allowing our efforts to be complementary and cumulative rather than competitive or unrelated. It is not easy and goes against many conventions, but it is key to building a hopeful flourishing network of movements that spans the globe.

Carrying out one-time actions or mobilizations or repeating our favorite or most familiar tactic (marches, conferences, street theater, direct action, educational events, etc.) without ongoing campaigns with clear long-range goals and vision — as well as short-term, winnable interim goals — can lead to burnout and is unlikely to build long-term movements to make change. This is essential as we push Obama to bring our troops home from Iraq, Afghanistan and the rest of the planet and to stand up to corporations and the economic system that underlies so many of the problems we face. With Obama in office, the cutting edge of organizing for change will be to clearly define and publicize very understandable demands. For example, it is not enough to say “end the war,” which Obama also says; we must also outline benchmarks of what ending the war means, such as troop removal before the 16-month deadline he committed to in his campaign, bringing all troops and private contractors home, closing all military bases and stopping the corporate takeover of Iraq’s natural resources.

People directly asserting their power can win changes and shift underlying power relationships. We have seen this in the 1999 shutdown of World Trade Organization meetings in Seattle and in anti-corporate successes like the Coalition of Imokalee Farm Workers’ recent victory over Burger King or the Water Wars in Cochabamba, Bolivia, where a mobilized citizenry drove out the U.S.-based Bechtel Corporation, which tried to increase water rates by 300 percent. If movements do not articulate our own people powerbased strategies to realize change, activists will be demobilized every two or four years as people get drawn into the official channels for change — national elections. We saw this in 2004, when, lacking a viable well-publicized strategy to stop the Iraq War, many people instead worked to defeat Bush. Whatever one’s belief about elections, parties or politicians, most agree that it is independent movements that force (or support) politicians to make positive changes.

4. EXPERIMENTS IN THE LABORATORY OF RESISTANCE

Nobody knows exactly how to change things. Developing new forms of resistance, communication and organizing is essential. Alternately, when we overuse a model or rhetoric that worked once or fetishize and base our identity on a certain device (like parading giant puppets, street reclaiming parties, black bloc, vigils or Seattle-style shutdowns), not only can our tactics be more easily repressed or co-opted, but the general public can be inoculated against them. Our actions are experiments in a laboratory of resistance. The value of any experiment comes when we analyze and reflect together on what worked and what did not and why. Creating a culture of creativity, reflection and analysis is key.

5. TELL OUR OWN STORIES

The world is made of stories, and our struggles for social change are battles of competing stories. Our actions can be our most powerful storytelling, like the 1994 Zapatista uprising in southern Mexico, the 1999 Seattle shutdown, or the Feb. 15, 2003, global antiwar protest of millions of people around the world. The system fights back by trying to take control of the meaning of our stories and by telling its own stories, like the post-September 11 “War on Terror.” Can we become powerful storytellers and win control of the meaning of our stories? Can we also support and nurture the independent media outlets (like The Indypendent!) that amplify our stories?

David Solnit organized with the Direct Action Network in Seattle in 1999 and currently works with Courage to Resist supporting GI resistance. He edited Globalize Liberation, co-wrote Army of None with Aimee Allison and has co-written/edited with Rebecca Solnit the forthcoming book The Battle of the Story of the Battle of Seattle (AK Press).