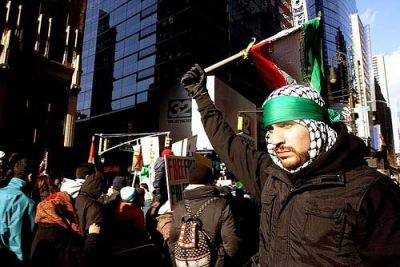 As Israeli ground troops crossed the border into Gaza, rapidly escalating an offensive that has taken the lives of over 460 Palestinians, thousands of New Yorkers gathered at Times Square on Saturday afternoon demanding that Israel end the killing and that the U.S. renounce its support of the Jewish state.

“We are demanding that the Palestinians be protected, but as Americans, we are also demanding that our tax money not be spent on killing innocent civilians,” said Ayman el-Fawa, an Arab American volunteer at Al-Awda, one of the organizers of the events.

In the bitter cold, protesters covered an entire four blocks for hours, spanning to , before marching to the Permanent Mission of Israel to the UN on Spectators continued to spill into the crowd well into the evening, even after the protest officially ended.

The event was the fourth of its kind, and the protests have visibly gained momentum. This time around, the rally brought together the largest number of protestors who heavily criticized the for its continuous support of .

“Innocent civilians are being killed and the American government is giving money to the Israelis, especially the administration of George Bush which has tried to justify the massacre by condemning the Palestinian resistance, who have the right to resist,” said Father George Makhlouf, a Palestinian priest who resides in Long Island.

The crowd was filled with many Arab Americans but also with anti-Zionist Jews, African American organizations and various other human rights and civil rights organizations. “Not in our names! Not with our money!” read one placard; “Yes We Can! Stop U.S. Military Aid to ,” read another.

Tens of police officers were deployed in the area, some on horses. A few counter-protesters demonstrated across the street, carrying Israeli and American flags and charging Hamas with terrorism, but the loud pro-Palestinian chanting and speeches drowned their voices out.

At one point during the protest, the opening verse of the Qur’an was recited, and some Muslim spectators could be seen praying in the middle of the bustling crowds. A young Arab rapper took to the stage to express his rage through rhyme. “To exist is to resist,” he rapped, “remember one thing, the bells of freedom will ring.”

Anti-Bush and anti-Condoleezza Rice placards were in abundance. Rice has blamed Hamas for the offensive, arguing that the conflict will end if the movement ceases its rocket attacks on .

Chanters compared the current situation in to apartheid in and charged with carrying out genocide. The crowd also voiced opposition to Arab regimes and leaders that have not done enough to end the violence, in particular Egyptian President Hosni Mubarak. Protestors across the Arab world have expressed outrage against the Arab response, with many demonstrating in front of Egyptian embassies. “I’m ashamed with the Egyptian response,” said el-Fawa, who is originally Egyptian. “The Arab nations… have to come together and say that this is enough.”

During Saturday’s protest, hundreds of curious tourists watched and took photos as they passed by, while members of various participating organizations delivered impassioned speeches from a loudspeaker. Some of the speeches called on incoming president Barack Obama to relinquish the ’s support of and for forces to leave and .

“Enough innocent children have died. Today will let people know that there are many in who do not support this sort of destructive response. It will let people know that there is a large number of us who are against war and killing and who understand the unreasonableness and the lack of logic that it took for this response,” said John Charles, a New York based attorney.

Speakers called on the crowds to continue expressing their outrage as the crisis goes on, and to pledge to continue protesting, lest the plight of the Palestinians be forgotten.

A similar protest will be held next Sunday.