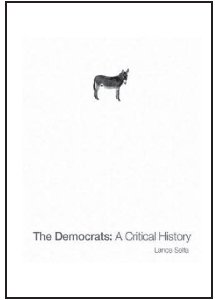 The Democrats: A Critical History
By Lance Selfa
Haymarket Books, 2008.

The countdown to George W. Bush’s final day in office put a smile on most progressive faces. As Jan. 20 rolls around, it’s hard to resist the urge to cheer the departure of one of the world’s chief warmongers. But will Barack Obama’s ascension mean anything beyond the symbolic, or will it be business-as-usual, at the behest of a more articulate, more likeable, head of state?

Lance Selfa has crafted a smart, readable history of the Democrats that reminds us of the party’s allegiance to capital. Despite forward-leaning spurts — the New Deal, the War on Poverty and the creation of programs such as food stamps, Medicaid, Medicare, Social Security and unemployment insurance — time and again we’ve seen Democrats capitulate on issues that matter, whether supporting militarism or slashing spending for human needs. “These Democratic betrayals are not primarily the result of unscrupulous politicians or office holders who sell out,” Selfa writes. “Rather, they are the inevitable outcome of a political institution that socialists have long described as a capitalist party that only pretends to be a friend of working people.”

The Democrats is at its best not just when analyzing Democratic foibles — and there are plenty — but when assessing how the party stifles dissent. Take trade unions. Selfa harkens back to the 1930s when militant strikes and on-the-ground activism swelled organized labor’s ranks from 2.7 million in 1933 to seven million four years later. “A remade Democratic Party was the vehicle Roosevelt used to absorb the rising labor movement within the confines of the existing political establishment,” Selfa continues. “By supporting the creation of Social Security and passage of the National Labor Relations Act of 1935, Roosevelt laid the groundwork for capturing the labor movement vote for the Democrats in 1936 and beyond.”

What’s more, labor leaders itching to enter the halls of power willingly sacrificed bellicosity and allowed themselves and their organizations to be co-opted. Labor honchos willingly agreed to nostrike pledges during World War II, and by the 1950s they lined up to sign anti-communist loyalty oaths. Indeed, for upwards of 60 years, organized labor has consistently championed Democratic politicians while rarely if ever challenging the status quo.

So what’s to be done? While it’s easy to conclude that the lesser of two evils is still evil, third-party efforts have repeatedly floundered, and despite Selfa’s plea for socialist alternatives to Republicrat rule, such alternatives have failed to materialize. Yes, Eugene Debs, Robert LaFollette and Ralph Nader won millions of votes when they ran — but they still lost.

Selfa criticizes efforts to change the Democratic Party from within — efforts promoted by the Democratic Socialists of America and Progressive Democrats of America — arguing that “the party of the World Bank, the CIA and the Vietnam War” will never allow substantive changes.

If he’s right, this leaves us in a quandary, since the revolutionary change he advocates seems like a pipe dream. While realism may reflect a failure of imagination, for the time being pushing the Democratic Party to end the wars in Iraq and Afghanistan and fund social programs seem like sound priorities.

After all, the first tenet of community organizing is to start where people congregate and agitate around their concerns. In 2009, these issues are militarism, the economy and the need for universal healthcare. And the place? Until we organize a party that reflects the interests of the poor and working classes, the Democrats are who’s there.