The ongoing conflict between Israelis and Palestinians has recently found an outlet in the gallery world. Israeli artist Michael Blum’s futuristic installation Exodus 2048, currently at the New Museum, and the highly acclaimed Palestinian-American artist Emily Jacir’s commemoration of slain Palestinian artist and intellectual Wael Zuiater at the Guggenheim, catapult the viewer into a world of dispossession and dislocation. Both evoke cultural and political oppression, themes all too common to the Palestinian and Jewish experience.

Due to the high birthrates among Palestinians in the Occupied Territories, and Israeli Arabs, combined they are projected to outnumber Israeli Jews by 2025. One possible outcome of this “demographic problem,” explored in Exodus 2048, is the Arab Israelis’ overthrow of the Jewish state and the forced migration of the Israelis. 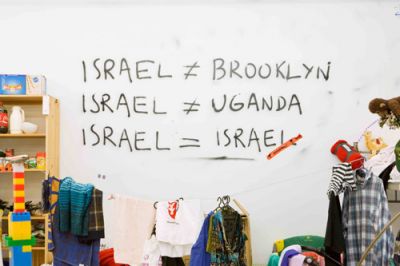 The world Blum creates includes a new Jewish state in Uganda, Israel’s government in exile in Brooklyn, and the refugee ship Exodus 2048, which wanders the seas for months before finally being accepted by the Dutch government. The exhibit depicts a refugee camp in a museum in the Netherlands where 150 of the boat’s passengers find shelter.

The exhibit opens with six text panels chronicling the events from Dec. 26, 2047, the start of the Arab uprising, to the end of the state of Israel five months later.

Viewers can sneak a peek through curtains into a refugee camp scene. The room is jammed with cots and bunk beds and the floor strewn with personal belongings, newspapers, children’s toys, open bags of potato chips, spilled coffee, dirty rags, shopping carts full of bags and clothes. Televisions pump out Hebrew language programming and the radios blare Israeli music.

Jacir’s two-part exhibition, which won the Guggenheim’s 2008 Hugo Boss prize, resurrects the life and work of Zuiater, a Palestinian born in Nablus who lived much of his life in exile as an artist and served as a spokesperson for the Palestine Liberation Organization. He was assassinated by Mossad agents in Rome in 1972 for his alleged association with Black September, the group responsible for the murder of 11 Israeli Olympians in that year’s Munich Games. No evidence has been offered linking him to the attacks, and by many accounts Zuiater was dedicated to nonviolence. 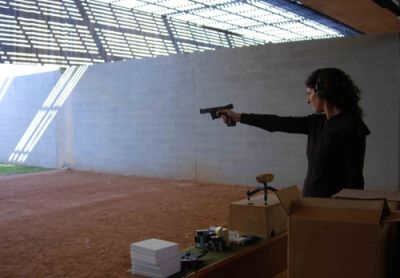 The exhibit includes personal effects from Zuiater: postcards he wrote to his girlfriend Janet, photos of him with family and friends, and photos of places that he frequented. It also brings Zuiater to life through audio recordings of him translating his writings from Arabic to Italian and conversations captured by Italian police wiretaps. When Zuiater was killed, he was carrying a copy of 1,001 Arabian Nights (his life’s ambition was to translate the work into Italian). One of the bullets was lodged in the spine of the novel. Jacir devotes a room to displaying 1,000 blank books with bullet holes, which she shot with a .22 caliber pistol, similar to that which took Zuiater’s life.

According to a friend of Zuiater, “his ultimate goal was the reconciliation of the Jews with the Palestinians.” The violent elimination and marginalization of moderate and progressive voices has had a deep impact on the Palestinian national struggle. As the exhibit points out, the world will never know Zuiater’s opinion of Hamas, the Islamist movement that was founded more than a decade after his death.

Blum’s work obviously invokes the plight of displaced Palestinians, especially the hundreds of thousands who have lived in refugee camps for decades. Another reference to the conflict comes from a fictitious Jewish leader who vows before leaving Israel, “You shouldn’t consider our escape as treason or cowardice, but as a strategic retreat while preparing for the next battle.” These words could have come from the mouth of any number of Arab leaders throughout the last 60 years of defeats.

South African intellectual and anti-apartheid activist Breyten Breytenbach has noted that “No two peoples are as similar and have as much of a shared commonality as the Israelis and the Palestinians.” These exhibits provide a rare glimpse into their intertwined history and future.