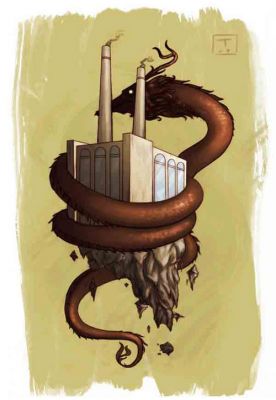 As goods pile up in wharves from Bangkok to Shanghai, and workers are laid off in record numbers, people in East Asia are beginning to realize they aren’t only experiencing an economic downturn but living through the end of an era.

For more than 40 years now, the cutting edge of the region’s economy has been export- oriented industrialization (EOI). Taiwan and South Korea first adopted this strategy of growth in the mid-1960s, with South Korean dictator Park Chung-Hee coaxing his country’s entrepreneurs to export by, among other measures, cutting off electricity to their factories if they refused to comply.

The success of South Korea and Taiwan convinced the World Bank that EOI was the wave of the future. In the mid-1970s, then-Bank President Robert McNamara enshrined it as doctrine, preaching that “special efforts must be made in many countries to turn their manufacturing enterprises away from the relatively small markets associated with import substitution toward the much larger opportunities flowing from export promotion.”

EOI became one of the key points of consensus between the Bank and Southeast Asia’s governments. Both realized import substitution industrialization could only continue if domestic purchasing power were increased via significant redistribution of income and wealth, and this was simply out of the question for the region’s elites. Export markets, especially the relatively open U.S. market, appeared to be a painless substitute.

The World Bank endorsed the establishment of export processing zones, where foreign capital could be married to cheap (usually female) labor. It also supported the establishment of tax incentives for exporters and, less successfully, promoted trade liberalization. Not until the mid-1980s, however, did the economies of Southeast Asia take off, and this wasn’t so much because of the Bank but because of aggressive U.S. trade policy. In 1985, in what became known as the Plaza Accord, the United States forced the drastic revaluation of the Japanese yen relative to the dollar and other major currencies. By making Japanese imports more expensive to American consumers, Washington hoped to reduce its trade deficit with Tokyo. Production in Japan became prohibitive in terms of labor costs, forcing the Japanese to move the more labor-intensive parts of their manufacturing operations to low-wage areas, in particular to China and Southeast Asia. At least $15 billion worth of Japanese direct investment flowed into Southeast Asia between 1985 and 1990.

The inflow of Japanese capital allowed the Southeast Asian “newly industrializing countries” to escape the credit squeeze of the early 1980s brought on by the Third World debt crisis, surmount the global recession of the mid-1980s, and move onto a path of highspeed growth. The centrality of the endaka, or currency revaluation, was reflected in the ratio of foreign direct investment inflows to gross capital formation, which leaped spectacularly in the late 1980s and 1990s in Indonesia, Malaysia, and Thailand.

The dynamics of foreign-investment-driven growth was best illustrated in Thailand, which received $24 billion worth of investment from capital-rich Japan, Korea, and Taiwan in just five years, between 1987 and 1991. Whatever might have been the Thai government’s economic policy preferences — protectionist, mercantilist, or pro-market — this vast amount of East Asian capital coming into Thailand could not do anything but trigger rapid growth. The same was true in the two other favored nations of northeast Asian capital, Malaysia and Indonesia.

It wasn’t just the scale of Japanese investment over a five-year period that mattered, however; it was the process. The Japanese government and keiretsu, or conglomerates, planned and cooperated closely in the transfer of corporate industrial facilities to Southeast Asia. One key dimension of this plan was to relocate not just big corporations like Toyota or Matsushita, but also small and medium enterprises that provided their inputs and components.

If Taiwan and Korea pioneered the model and Southeast Asia successfully followed in their wake, China perfected the strategy of export-oriented industrialization. With its reserve army of cheap labor unmatched by any country in the world, China became the “workshop of the world,” drawing in $50 billion in foreign investment annually by the first half of this decade. To survive, transnational firms had no choice but to transfer their labor-intensive operations to China to take advantage of what came to be known as the “China price,” provoking in the process a tremendous crisis in the advanced capitalist countries’ labor forces.

This process depended on the U.S. market. As long as U.S. consumers splurged, the export economies of East Asia could continue in high gear. The low U.S. savings rate was no barrier since credit was available on a grand scale. China and other Asian countries snapped up U.S. treasury bills and loaned massively to U.S. financial institutions, which in turn loaned to consumers and home-buyers. But now the U.S. credit economy has imploded, and the U.S. market is unlikely to serve as the same dynamic source of demand for a long time to come. As a result, Asia’s export economies have been marooned.

THE ILLUSION OF “DECOUPLING”

For several years China has seemed to be a dynamic alternative to the U.S. market for Japan and East Asia’s smaller economies. Chinese demand, after all, had pulled the Asian economies, including Korea and Japan, from the depths of stagnation and the morass of the Asian financial crisis in the first half of this decade. In 2003, for instance, Japan broke a decade-long stagnation by meeting China’s thirst for capital and technology-intensive goods. Japanese exports shot up to record levels. Indeed, China had become by the middle of the decade, “the overwhelming driver of export growth in Taiwan and the Philippines, and the majority buyer of products from Japan, South Korea, Malaysia, and Australia.”

Even though China appeared to be a new driver of export-led growth, some analysts still considered the notion of Asia “decoupling” from the U.S. locomotive to be a pipe dream. For instance, research by economists C.P. Chandrasekhar and Jayati Ghosh underlined that China was indeed importing intermediate goods and parts from Japan, South Korea and the Association of Southeast Asian Nations, but only to put them together mainly for export as finished goods to the United States and Europe, not for its domestic market. Thus, “if demand for Chinese exports from the United States and the EU [European Union] slow down, as will be likely with a U.S. recession,” they asserted, “this will not only affect Chinese manufacturing production, but also Chinese demand for imports from these Asian developing countries.”

The collapse of Asia’s key market has banished all talk of decoupling. The image of decoupled locomotives — one coming to a halt, the other chugging along on a separate track — no longer applies, if it ever had. Rather, U.S.-East Asia economic relations today resemble a chain-gang linking not only China and the United States but a host of other satellite economies. They are all linked to debtfinanced middle-class spending in the United States, which has collapsed.

China’s growth in 2008 fell to 9 percent, from 11 percent a year earlier. Japan is now in deep recession, its mighty export-oriented consumer goods industries reeling from plummeting sales. South Korea, the hardest hit of Asia’s economies so far, has seen its currency collapse by some 30 percent relative to the dollar. Southeast Asia’s growth in 2009 will likely be half that of 2008.

The sudden end of the export era is going to have some ugly consequences. In the last three decades, rapid growth reduced the number living below the poverty line in many countries. In practically all countries, however, income and wealth inequality increased. But the expansion of consumer purchasing power took much of the edge off social conflicts. Now, with the era of growth coming to an end, increasing poverty amid great inequalities will be a combustible combination.

In China, about 20 million workers have lost their jobs in the last few months, many of them heading back to the countryside, where they will find little work. The authorities are rightly worried that what they label “mass group incidents,” which have been increasing in the last decade, might spin out of control. With the safety valve of foreign demand for Indonesian and Filipino workers shut off, hundreds of thousands of workers are returning home to few jobs and dying farms. Suffering is likely to be accompanied by rising protest, as it already has in Vietnam, where strikes are spreading like wildfire. South Korea, with its tradition of militant labor and peasant protest, is a ticking time bomb. Indeed, East Asia may be entering a period of radical protest and social revolution that went out of style when export-oriented industrialization became the fashion three decades ago.

This article was adapted from an article originally published in Foreign Policy In Focus. Walden Bello is a senior analyst at Global South and president of the Freedom from Debt Coalition.

China: Looking Inwards, a web exclusive by Smriti Rao in this issue of The Indypendent.