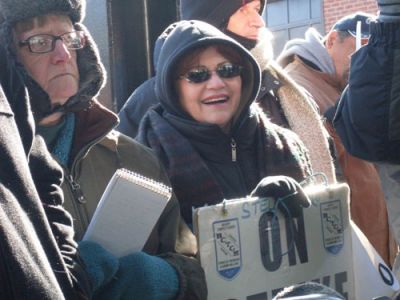 OUT IN THE COLD: Striking workers of the Stella D’oro Biscuit Co. factory march in the Bronx, Jan. 31. The company’s owners are demanding that workers take a 28 percent pay cut and a substantial deduction in benefits. PHOTOS: SARAH SECUNDA

On a bright and bitterly cold Saturday morning, several hundred protesters gathered outside the Stella D’oro Biscuit Co. factory in the Bronx Jan. 31 to call for a boycott of the company’s famous cookies and biscuits.

“No contract, no cookies!” the crowd chanted as people marched from the factory, located 84 West 237th Street, down Broadway to a rally site located near the Target Shopping Center at 225th Street and Major Deegan Expressway.

The 136 workers of Stella D’oro, members of the Bakery, Confectionery, Tobacco Workers, and Grain Millers (BCTGM) International Union Local 50, have now been on strike since Aug. 13, when the company’s management walked out on contract negotiations.

Management so far has refused to alter the company’s proposed contract, which calls for workers to take a 28 percent pay cut over the next five years. The proposed contract, among other concessions, would also eliminate sick pay, four holidays and one week of vacation.

In a Dec. 18 letter to strikers, the company warned that it already had filled about half of the union members’ positions with scabs.

Sarah Rodriguez, a Stella D’oro employee of 11 years, characterized the situation as a waiting-game.

“They want to get rid of the union,” she said, referring to the company’s owners, the private equity firm Brynwood Partners.

With their unemployment benefits set to run out in May, the strikers in recent weeks have ramped up their efforts to draw attention to their cause, holding rallies and calling press conferences.

Jerry Fleck, who has worked at Stella D’oro for 27 years, described the Jan. 31 rally as the largest demonstration yet.

“Hopefully it will wake [management] up,” Fleck said. “They thought we were going to cave in already. They thought somebody was going to cross the line. But they got to know that this is a community.” 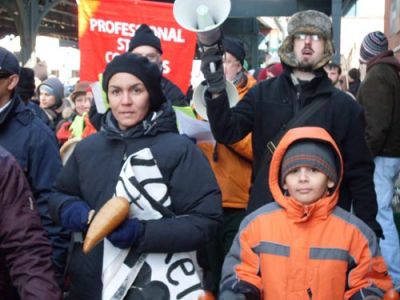