Rule changes proposed by the New York City Department of Buildings in February have been slammed by critics citywide, and have raised fears that the changes could lead to a significant rise in illegal construction across the city and boroughs after they are implemented in mid-April.

The Rules of the City of New York (RCNY) guide city agencies like the Department of Buildings (DOB) when interpreting the City Charter and enforcing its laws. RCNY changes can be made by the Buildings Department without a vote from the City Council.

As the current rules governing the DOB stand, members of the public are not subject to time constraints when raising objections to approved plans for new buildings or major alterations with the Buildings Department.

However, come mid-April, Rules 105-04 and 105-03 will impose a 30-day public challenge period for challenging construction plans approved by the Buildings Department. The move has raised an outcry among politicians at both the city and state level. 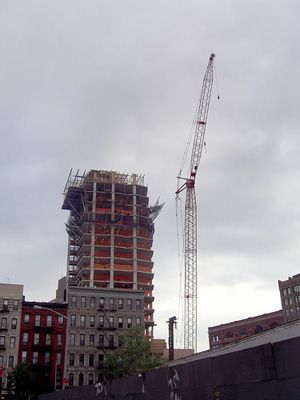 “This is a Trojan horse, permitting developers to run roughshod over communities,” said State Assembly member, James F. Brennan (D-Brooklyn) at a March 6 press conference on the steps of City Hall.

Avella, who is chair of the City Council’s Zoning and Franchise Committee, had some hard-hitting words for the DOB, which he has called the “most corrupt and incompetent agency in the history of New York City.” He called the proposed rule changes an “outrage” and asked for them to be scrapped.

“This is a blatant attempt to eliminate community review of construction projects in our neighborhood. It must be stopped,” Avella said.

The 30-day review period for new development or major building improvements begins the day the plans are published on the DOB website.

At a packed hearing following the press conference, opponents of the move from the offices of elected officials, civic groups and block associations submitted testimony to the DOB’s Assistant General Counsel Deborah Glikin. All opposed the rule changes.

Chief among their concerns with the 30-day deadline is the ease with which it could be circumvented by developers wishing to avoid public scrutiny of their construction projects.

If a member of the public does not check the website every day, there would be virtually no way they would know if plans, legal or not, had been approved by the Buildings Department, opponents of the rule changes noted.

A developer, opponents say, could easily wait out the 30-day deadline before commencing construction, then post a permit on-site three days later as the new rules will require.

Though not part of the rule changes, the Department did come in for some praise, however, for promising to post a zoning diagram online, graphically showing the proposed zoning bulk, yards and tree planting, an unprecedented move nationwide.

However, even this proposal was blasted as another pitfall, requiring background knowledge of the zoning resolution and, if not, the time-consuming task of finding an expert, critics said.

Critics of the 30-day review period point to an already lax process for DOB approving development plans. Under the DOB Professional Certification Program, registered architects and engineers can certify that their own plans are “in compliance with all applicable laws.” As a result, many plans are approved with barely more than a glance from a Buildings plan examiner, critics say.

The latest statistics from the Independent Budget Office of the City of New York show that close to 50 percent of all new construction plans were professionally certified in 2007. Of these, almost 25 percent were randomly audited by Buildings. Approximately 22 percent of those plans were later revoked.

A spokesperson for the Buildings Department, Carly Sullivan, said that missing the 30-day deadline does not preclude the public from challenging construction applications because a construction permit represents a “final determination” from the Department. Objections to approved plans can still be raised before the Board of Standards and Appeals (BSA).

However, critics counter, rerouting the DOB responsibilities to the BSA can be prohibitively expensive and can tangle objections in a complicated legal process.

BSA decisions can also, critics say, be appealed all the way past the state’s Supreme Court to the Court of Appeals, possibly drawing out the legal process for years and adding to the onerous cost.

At the hearing, East Village resident Monte Schapiro recalled his experience appealing the DOB’s approval of an illegal construction on top of his rent-stabilized building. Three years later, one case is currently being heard by the state’s Supreme Court and the other possibly before the Appellate Division. In both cases, though the BSA unanimously ruled against the DOB, reversing that agency’s approval and calling for the permits to be revoked. Schapiro said the rule changes have “nothing whatsoever to do with facilitating public challenges,” as Bloomberg and DOB Commissioner Robert LiMandri have said.

“What it all comes down to is this. The DOB not only allows illegal work to take place now it wants to place time restrictions on the public’s right to challenge these things,” Schapiro said.