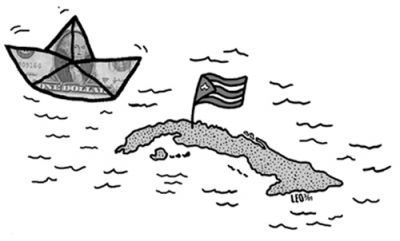 Leading advocates for lifting the nearly 50-year-old U.S. trade embargo against Cuba are hailing Congress’s March 10 approval to ease — albeit in a mostly symbolic way — several restrictions on travel and sales to the Caribbean nation.

The bill, which was signed by President Barack Obama the following day, denies funding to the U.S. Treasury Department to enforce two restrictions, including travel to Cuba by Cuban-Americans, imposed by former President George W. Bush.

The bill also provides for a general license for travel by U.S. companies and individuals to Cuba for the purpose of selling U.S. agricultural and medical goods.

A Bush-imposed regulation had required that businesses wishing to sell their products in Cuba had to apply for a specific license on a case-by-case basis, a cumbersome process that discouraged many companies from engaging in trade.

“For the first time in almost a decade, Congress is acting to loosen the Cuba embargo and send these modest reforms to a president who has promised to change the policy rather than issue veto threats or keep things as they are,” asserted a joint statement by several groups, including the Center for Democracy in the Americas and the Washington Office on Latin America.

“When we have a Congress and a president acting to make sensible changes in Cuba policy, this indicates to us that the ground has shifted and that there is momentum behind the efforts to make broader and more lasting changes in policy,” said the groups, which also included the U.S.-Cuba Policy Initiative of the New America Foundation and the Latin America Working Group.

The easing of the Cuba embargo comes a month before Obama’s much-anticipated attendance at the Summit of the Americas in Trinidad where he will meet all of the hemisphere’s leaders except Cuban President Raul Castro.

Before he travels to the Summit, Obama is widely expected to follow through on campaign promises to use his executive authority to lift two of the most controversial measures imposed by Bush, which limited the freedom of Cuban-Americans to visit their families in Cuba to once every three years and their ability to send remittances to their families on the island.

Anti-embargo activists, which not only include groups focused primarily on Cuba, but also major U.S. business associations, including the U.S. Chamber of Commerce, and human rights groups, such as Amnesty International, hope that Obama will go further than that, possibly by broadening the authority of the Treasury Department to issue general licenses for a wider range of travel to Cuba, including educational and cultural travel.

Of the three Cuba-related provisions Congress approved, two are mainly symbolic. Thus, Cuban-Americans will still be permitted to visit their families once every three years, but the Treasury Department, which is charged with enforcing the embargo, will not be permitted to prosecute those who wish to travel more often, because no funds will be appropriated for that purpose.

Similarly, U.S. food and medical companies that export goods to Cuba will still be required under law to receive payment in cash before their shipments leave U.S. ports. But, under the new provision, Treasury will not be able to prosecute companies that receive cash on actual delivery.

The third provision — permitting Treasury to issue a general license for agricultural and medical businesses wishing to export goods to Cuba rather than forcing companies to approve requests on a case-by-case basis — does mark a real change in the underlying law, according to Jake Colvin, vice president of the National Foreign Trade Council (NFTC), an association of major U.S. multinational corporations which strongly supports lifting the embargo.

“This will make travel to Cuba for a whole class of businesspeople much easier,” he told IPS.

All of the anti-embargo groups, including the NFTC, said the fact that Congress took the first step toward easing the embargo should make it easier for Obama to go beyond his campaign promises to ease restrictions on Cuban-American travel and remittances.

“This debate shows how significantly the U.S. political climate has changed on Cuba,” said Sarah Stephens, director of the Center for Democracy in the Americas. “I believe there is momentum in Congress to make travel available for all, but the president need not wait for legislation to seize the initiative,” she said.

A version of this article was originally published by the Inter Press Service. Jim Lobe’s blog on U.S. foreign policy can be read at http://www.ips.org/blog/jimlobe/.