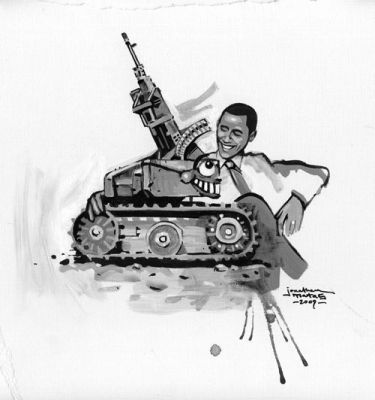 With little public scrutiny, robotics is quickly revolutionizing not only how war is fought, but who fights in war. While the U.S. military first began to experiment with remote-controlled weapons during World War I, the Pentagon had no robots on the ground when it invaded Iraq in 2003, and only a handful of unmanned aerial vehicles (UAVs) in the air. Today, according to P.W. Singer, author of Wired for War and a senior fellow at the Brookings Institution, the U.S. military has some 7,000 UAVs in operation — more than double the number of manned aircraft in its arsenal — and more than 12,000 robots on the ground in Iraq alone.

Predator drones armed with laser-guided Hellfire missiles have regularly bombed Iraq and Afghanistan in recent years, and their use is skyrocketing. In 2008, 71 Predators flew 138,404 combat hours — a 94 percent increase over the year before, according to a recent presentation by U.S. Air Force Col. Eric Mathewson. And over the last year, drones flown largely by the CIA have launched missile attacks inside Pakistan more than 40 times. Rather than reconsider this deadly policy, President Obama has become an enthusiastic backer. Since his inauguration, he has authorized 11 such attacks that have collectively killed over 145 people, many of them civilians, and sparked large protests within Pakistan.

UAVs are also increasingly being used inside the United States. The Department of Homeland Security has deployed unarmed drones to monitor the borders with Mexico and Canada. Police departments in Los Angeles, Houston and Miami have been testing drones for surveillance purposes in their cities. And according to the Washington Post, activists have even reported seeing insect-sized spy drones at antiwar rallies in Washington and New York.

In Iraq, there are at least 22 different unmanned ground vehicles (UGVs) in operation. While they are used primarily for reconnaissance and to help soldiers defuse roadside bombs, the first armed ground robot was deployed south of Baghdad in May 2007. The Special Weapons Observation Remote Direct-Action System, or SWORDS, stands three feet tall and rolls on two tank treads. It’s currently fitted with an M249 machine gun that can be swapped for other powerful weapons and controlled with a modified laptop. More sophisticated UGVs — such as the MAARS and the one-ton Gladiator — are currently being developed and tested and will likely see combat in the near future.

Congress has helped spur this revolution. In 2001, the Defense Authorization Act stated that one-third of the military’s deep strike aircraft should be unmanned within 10 years, and that one-third of the ground combat vehicles should be unmanned within 15 years. And in the Defense Department’s 2007 budget, Congress ordered the Pentagon to show “a preference for joint unmanned systems in acquisition programs for new systems.”

Congressional backing and the increasing popularity of these systems within the military have fueled a booming robotics industry. The Association of Unmanned Vehicle Systems International, for example, has 1,400 member companies and organizations from 50 countries looking to cash in on the future of war.

While robots spell big money for weapons contractors, they will make the work of antiwar activists far more difficult. In all likelihood, as the proponents of military robots claim, the number of U.S. soldiers who are killed on the battlefield will decrease. This has been the trend with continual advances in military and medical technology and as the Pentagon has turned to mercenaries and civilian contractors who are not included in official death tolls.

For example, more than 58,000 U.S. soldiers were killed in Vietnam. Today, after six years of fighting in Iraq, fewer than 4,300 U.S. soldiers have died in combat. And in Afghanistan, about 1,100 soldiers from Western countries have been killed. The use of robots is partly responsible for this dramatic reduction in U.S. casualties. As unmanned systems are deployed in greater numbers, that figure will drop.

This may sound like a positive development, but its potential downsides are profound. At the same time that the number of soldiers killed in war has dropped, the percentage of civilian casualties has steadily risen. In World War I, less than 10 percent of casualties were non-combatants; in World War II , the percentage of civilian casualties was roughly 50 percent, and today over 90 percent of those killed in wars are civilians. In Iraq, one detailed study estimated that more than 600,000 Iraqis had been violently killed by June 2006. By allowing soldiers to kill from greater distances, which makes it easier to pull the trigger, robots may take this trend a step further.

There is already evidence that the use of aerial drones is disastrous for civilian populations. The Sunday Times of London recently reported that as many as one million Pakistanis have fled their homes “to escape attacks by the unmanned spy planes as well as bombings by the Pakistani army.”

Some argue that military robotics will also increase the threat of terrorism. “If people know that they are going to be killed by these robots,” argues Fr. G. Simon Harak, director of the Marquette University Center for Peacemaking, “then why would they not therefore retaliate against civilian centers in the United States? It only makes military sense that they’ll find where we are vulnerable.”

More than anything else, the prospect of U.S. troops dying on some far-off battlefield limits public support for military force. Therefore, if the number of soldiers coming home in body bags can be significantly reduced, then the public will probably pay even less attention to foreign policy and future wars. This will in turn make it easier for politicians to start wars.

For instance, John Pike, the director of GlobalSecurity.org, recently wrote in the Washington Post that robots would allow the United States to intervene militarily in Darfur or other hot spots where politicians are currently reluctant to send flesh-and-blood soldiers.

Robots will also affect the counter-recruitment movement. Whereas each SWORDS is controlled by at least one soldier, progress in the field of artificial intelligence may allow a soldier to control multiple robots simultaneously. James Canton, chief executive officer of the Institute of Global Futures and an expert on military technology, predicts that future military units may consist of 150 humans and 2,000 robots. Such a development would allow the government to go to war with far fewer humans.

While a robotized military presents new challenges for antiwar activists, it also creates new organizing opportunities. Many weapons builders that develop unmanned systems, such as iRobot and Northrop Grumman, are publicly traded companies. That exposes them to potential shareholder resolutions and makes them more sensitive about their public image.

Some military contractors also make consumer products. For example, iRobot manufactures both the PackBot, a bomb-disposal robot that can be armed with a shotgun, and the popular Roomba vacuum cleaner. As the market for personal and service robots — which was valued at $3 billion in 2008 — continues to grow, boycotting corporations that make both consumer and military robots is potentially an effective tactic for activists.

With nearly 350 colleges and universities reportedly conducting research for the Pentagon, another possible target is robotics research funded by the Department of Defense. On March 2, 2007, activists with the Pittsburgh Organizing Group blockaded the National Robotics Engineering Center at Carnegie Mellon University, one of the largest academic military contractors in the country. Fourteen activists were arrested in the action, which successfully shut down the robotics lab for the day and garnered considerable media attention.

Finally, activists are beginning to protest at military bases where the drone pilots work. At Nevada’s Creech Air Force Base — one of the locations where controllers use Predator and Reaper drones to bomb Iraq, Afghanistan and Pakistan — protesters who participated in the Nevada Desert Experience’s annual Sacred Peace Walk kept a presence outside of the base for 10 days, and 14 were arrested in an act of civil disobedience on April 9.

When it comes to killer robots, the stakes are high. If activists don’t work to stop this robotics revolution in its tracks, science fiction has warned us about our potential fate.

A longer version of this article is published in the April 2009 issue of WIN Magazine.