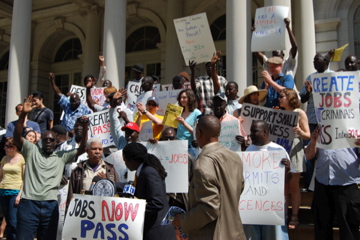 Taking a break from the hustle and bustle of working the city streets, around 40 street vendors gathered on the steps of City Hall on Tuesday, chanting “Vendor Power!” and “Si Se Puede!” (Yes, We Can!), to urge the New York City Council to pass Introduction 324, which would create more than 10,000 jobs by increasing the number of licenses and permits for vendors.

“We are asking Mayor Bloomberg to serve the needs of everyday New York citizens,” said Michael Wells, co-director of the Street Vendor Project at the Urban Justice Center, a non-profit organization that advocates on behalf of New York City’s most vulnerable communities.

Introduction 324 would significantly increase the number of vendors legally allowed on the streets, raising permit numbers for general merchandising to 15,000 and food permits to 25,000. The legislation, introduced by City Council member Charles Barron, has so far 11 co-sponsors.

The number of vendor licenses remains capped at 1979 levels, allowing only 853 general vending licenses and 3,100 food permits. And with the unemployment rate for New York City at 8.1 percent for March, compared to 5.1 percent in 2008, and the dwindling job market, about 13,000 New Yorkers are currently on a waiting list for a vending license. Left with little alternative, New Yorkers are oftentimes turning to illegal means to obtain permits.

According to the Street Vendor Project, about two-thirds of street food vendors are renting licenses from individual holders. Instead of a $75 permits, vendors are paying up to $8,000 to buy permits off the black market.

“We have some hard working people who all they want is the opportunity to work,” said Douglas Lasdon, executive director of Urban Justice, “there really is no legitimate policy reason for them not to have that opportunity.”

But instead of widening the opportunity for employment, New York State Senator Daniel Squadron proposed legislation that would allow police to fingerprint unlicensed vendors.

“Senator Squadron said it’s a tracking system,” said Ivet Bandirma, executive director of Esperanza Del Barrio, a grassroots organization that serves to empower street vendors in New York City. But with about 83 percent of street vendors being immigrants, Bandirma says she sees Senator Squadron’s legislation “as a direct attack on the immigrant population.”

Fingerprinting an immigrant vendor puts them in direct contact with the criminal justice system. And once immigrants are in the system, Immigration and Customs Enforcement (ICE) is contacted. “I’m not sure the legislature realizes the repercussions of this,” said Bandirma. “It lumps civil law with criminal law,” because for immigrants, vending without a license could result in deportation.

The 1996 immigration laws passed under the Clinton administration makes minor offenses, even unlicensed street vending, a reason to deport any immigrant — documented or not.

As a merchandise vendor for over ten years, Moussa Dia came out to support his friends on the long list of backlog waiting for a city permit. “Vending on the street is not a crime,” he said, “people are just trying to make their living.”