The vote united the three opposition parties, the Liberals, the Bloc Quebecois and the New Democratic Party in a close 129 to 125 vote.

On March 25, the War Resisters Support Campaign rallied for former U.S. Army soldier, Kimberly Rivera, the first female U.S. soldier to seek refuge in Canada. Nearly 100 people filled the chairs and lined the aisles at the Steelworkers hall in Toronto for Rivera, her husband and three children, the youngest born in Canada six months ago.

The morning after the March 25 rally, Rivera was due to be deported back to the United States to face an Army court martial, but Federal Judge James Russell agreed with Rivera’s argument that resisters who speak out against the war publicly in Canada receive harsher sentences, and granted her a temporary stay.

“This was the fifth time that the court ruled that Iraq war resisters face harsher punishment if they’re sent back to the U.S.,” said Michelle Robidoux, spokesperson for the Toronto-based support campaign. “The courts have spoken, Parliament has spoken and Canadians have made their views clear. These conscientious objectors should not be sent back to the United States to face jail time for opposing the Iraq War.” 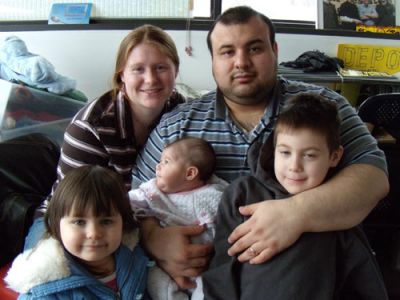 Several other resisters were at the Steelworkers hall to support Rivera and her family, including Jeremy Hinzman, the first U.S. serviceperson to go to Canada during this war, Phil McDowell and his wife Jamine, Chuck Wylie, Dale Landry, Ryan Johnson and three others who did not want their names mentioned.

At that rally, Member of Parliament (MP) Olivia Chow, the New Democratic Party  (NDP) Immigration and Citizenship Critic, announced March 26 that she would introduce a resolution in the House of Commons restating Parliament’s position from last June. That measure, as well as the most recent one, are non-binding resolutions the Harper government does not have to legally obey. However, to give an idea how much public support is behind letting war resisters stay in Canada, campaign organizers feared Chow’s surprise announcement might lose the votes of some Liberal MPs who did not appreciate the NDP grabbing the limelight on the issue.

In a June 2008 survey by Angus Reid Strategies, 64 percent of Canadians polled want the government to allow war resisters to become permanent residents. The poll results were reported in the Truro Daily News Jan. 23that carried a story on Dick Cotterill, who enlisted in the Marine Corps, decided he was opposed to the Vietnam War and went to Nova Scotia in 1972.

Cotterill now owns his own business and has a son in the Canadian Air Force. When asked how he felt about the current generation of young war resisters, he said, “Every soldier has the responsibility to refuse to obey orders that are illegal, unjust and immoral.”

That sentiment was echoed several times at the rally for Rivera March 25. Two local clergy members spoke in support, saying resisters have a right to refuse to serve in an illegal war. One even said he welcomed these young men and women and called them, “the kind of people Canada needs.”

The morning after the rally, when Rivera would have been deported, save for Judge Russell’s reprieve, Robidoux let a late-morning breakfast go cold as she furiously called fellow campaigners and texted Members of Parliament on the floor of the House debating Chow’s motion. Not long after the resolution’s introduction, Conservatives moved to end discussion, which would effectively kill the measure.

Reading one incoming text message, she exclaimed, “Ha! This is the new Tory line: ‘We don’t need this legislation, Obama will save them (resisters).’”

Commenting on the non-binding nature of the resolution, Robidoux said, “I think we’re going to win or lose the fight in the next six months. Unless there is a change in the government we’ll not win the political solution. We need a change in the regulations. The Conservative government can be pushed on a case-by-case basis, (to let resisters stay) but that’s a real long shot.”

Asked why this issue is so important to Canadians that they would make a significant effort to organize support, Robidoux replied, “The history we had during the Vietnam War is the foundation of today’s War Resisters Support Campaign. People my age had contact with draft resisters. I remember when I was eight years old and there were a few of them living in the house next door. I thought they were cool.”

Robidoux described how sheltering resisters during that war became part of the Canadian culture.

“The announcer of the most popular radio program on CBC [Canadian Broadcasting Corporation] came here during that war. There’s a well-known beer in British Columbia called ‘Draught Dodger.’ The president of the Steelworkers local here was a resister. Artists, activists, the co-founder of Greenpeace…nobody wants to lose that history and those contributions,” Robidoux said. “It’s more than just being against war. It’s the right to conscience. What’s happened now is that the Tories are sick of that history; they don’t want to hear any more about it.”

A second reason, Robidoux said, is the Iraq War itself.

“It’s simple. It’s wrong. You don’t need a political science degree to understand that. Opposition to it has increased every year.” Illustrating her point, she noted that on Feb.15, 2003, as part of protests around the globe to oppose the invasion of , Canadians turned out in massive numbers. “There were 80,000 people in the streets of , 250,000 in , many thousands in … even 7,000 in the little city of [].”

Robidoux , a wiry 47-year-old, finally paused and took a deep breath. “Since May of ’08 there’s been no down time. I’m not exaggerating … it’s just running flat out.” After that momentary pause, Robidoux returned to how the current sanctuary movement for resisters came about.

“It’s important Americans learn of our relationship with the peace movement. If it wasn’t for MFSO [Military Families Speak Out], we probably wouldn’t have gotten off the ground,” Robidoux said. “We met Nancy (Lessin) and Charlie () [cofounders of MFSO], at an early demonstration in . I noticed this couple wearing Steelworkers’ jackets and went up to talk with them. We had them come to in February ’04 to speak and I had seen an article on Jeremy Hinzman, the first soldier to come to . Nancy and Charlie knew he was staying with some Quakers, so we were able to find him. Then Brandon Hughes came two or three months later via the Quakers, and we decided in May ’04 to launch the War Resisters Support Campaign.”

Robidoux refuted the argument that soldiers are no longer drafted and therefore don’t qualify for sanctuary in , by referring to “…the whole ‘compulsion’ argument. You’ve got ‘Stop-Loss’ which the military uses to keep soldiers on active duty, the ‘Individual Ready Reserve’ that reactivates them any time during an eight year period even if they’ve served their four year contract, also the early National Guard call-ups and that’s not even talking about the economy.”

Robidoux said the campaign will now concentrate on getting a “Private Member’s” bill introduced that, if it passes, will have the force of law to stop deportation of resisters. “Of course these Tories could still decide to ignore it, which they have with other legislation that has been passed,” she said ruefully.

Recognizing the substantial number of calls to Canadian officials U.S. peace activists have made to support the resolutions and urge compliance, Robidoux said the most important thing people south of the border can do is to “build links with resisters who are here, maybe ‘adopting’ a resister, and helping to build awareness of their situation among Americans and American media. It will be up to us in to win it here among our politicians.”

Mike Ferner (mikeferner.org) is the author of “Inside the Red Zone: A Veteran For Peace Reports from ,” and is the local president of Veterans for Peace in .