Having survived female genital mutilation when she was three years old in Senegal, Fatoumata does not want her four U.S.-born daughters to face the same violence. But as an undocumented immigrant at risk of deportation, the past Fatoumata fought to leave behind might be catching up to her children.

Fatoumata, who requested that her last name be withheld, is fighting her case in U.S. immigration courts. If her application for political asylum is denied, then she faces the unenviable dilemma of either separating from her children, who have U.S. citizenship, or moving them back to Senegal where her family is demanding her daughters undergo the traditional genital cutting.

“What we see is that the U.S. asylum system at present is widely inconsistent in resolving gender-based claims,” said Jeanne Smoot, director of public policy at the Tahirih Justice Center, a nongovernmental organization that works to protect women and girls from gender-based violence. “There really is a lack of recognition, a lack of clear compassion for the fact that obviously a fear of persecution to one’s children really is a fear of persecution to oneself.”

More than 14 years ago, Fatoumata arrived in the United States with her husband and settled in New York City. Her husband immediately applied for political asylum, listing her for “derivative status,” a provision that helps protect spouses and children. His application was denied. Fatoumata’s lawyer could not comment on the case.

Fatoumata and her husband, however, remained in the United States illegally and began a family. Thirteen years and six children later, U.S. Immigration and Customs Enforcement (ICE) arrested Fatoumata’s husband on July 20, 2007. She said that ICE arrived at their home in the middle of the night, taking Fatoumata and her children by surprise.

“My children were in the bed that time,” Fatoumata said. “They were shaking,” because of “the way ICE was acting, yelling, screaming. They have flashlights, they carry the guns, they were going all over the house.”

The house raid, and subsequent deportation of her husband four months later, left Fatoumata struggling as a single mom with six kids. Without legal status to work, Fatoumata has no means of earning a steady income and has recently moved into the New York City shelter system, relying on $731 in food stamps a month to feed her family.

“We came so we can make a family and a better place, that’s our dream,” Fatoumata said, “but I don’t know. It’s getting worse for us.”

Although female genital mutilation is illegal in Senegal, enforcement is very weak, explains Taina Bien-Aimé, executive director of Equality Now, an international human rights organization dedicated to women’s rights. “It is such a strong cultural tradition and it’s also very difficult for the child to go and complain,” Bien-Aimé said. 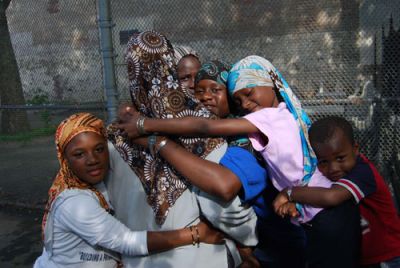 PROTECTING HER FAMILY: Five of Fatoumata’s six children hold her tight. Having already lost their father, they say they are afraid their mother will be deported, too. To protect her identity, Fatoumata covers her face. PHOTO: KAREN YI

Although the procedure varies in each country and village, Bien-Aimé described a typical scenario of female genital mutilation: “A number of women hold the girl down — one at her head, one at each arm. They open her legs and then they just take whatever they have available — a razor, a sharp knife, sometimes a stone — and they start slicing. It is generally done without anesthesia and in very unsanitary conditions.” The procedure involves the partial or total removal of the external female genitalia.

This scene could await Fatoumata’s four daughters, 6, 9, 11 and 13 years old. Facing heavy pressure from her family back in Senegal to have her daughters subjected to the cutting, Fatoumata fears the worst. “If I go back [to Senegal] I don’t have any power to stop them,” she said.

Female genital mutilation is most commonly performed between the ages of four and eight, but it can take place from infancy to adolescence. It is considered one of the worst violations listed in the U.N. Convention on the Rights of the Child. Amnesty International estimates that, as of 2005, more than 136 million women worldwide have been affected by some form of genital cutting.

If Fatoumata is not granted political asylum, she could be deported back to Senegal. Rather than leave her six children in foster care, Fatoumata says she’ll take them with her. But with the safety of her kids on the line, Fatoumata is fighting for a way to stay here, and she is not alone.

A coalition of immigrant rights and faithbased groups have formed a defense committee for Fatoumata, providing advocacy and resources and promoting public awareness. Two years ago Fatoumata filed a motion to reopen her asylum case. The motion was denied by the Board of Immigration Appeals (BIA) and is currently waiting to be heard in the U.S. Court of Appeals for the Second Circuit.

Joshua Bardavid, Fatoumata’s pro-bono immigration attorney, said he expects her case to be denied based on a procedural hurdle established by the Illegal Immigration Reform and Immigrant Responsibility Act of 1996. Under the 1996 laws, a person cannot reopen his or her case more than 90 days after the case is decided.

Bardavid, however, is working on a new motion to reopen her case based on evidence that asylum status is needed in order to protect her daughters.

While the 1996 case of Fauziya Kasinga established female genital mutilation as a reason for political asylum, Smoot said, “The law at present doesn’t provide a clear means for parents seeking to protect their children to be granted asylum.”

“Fatoumata’s case is really emblematic of what’s wrong with the system,” said Janis Rosheuvel, director of Families for Freedom, an immigrant rights organization.

“To make the impossible choice between those two terrible extremes — either to place their daughters at risk but keep their families together or remove that risk only by surrendering those girls to grow a world apart from them, in our opinion, effectively threatens to create a foster class of girls who are left behind here and families that are separated in order to secure the girls’ protection,” Smoot said.

Since the United States approves the applications of just over 20 percent of the political asylum cases each year, Fatoumata faces an uphill battle. According to statistics from the U.S. Department of Justice’s Executive Office of Immigration Review, the Immigration Courts granted about 10,700 of about 47,400 asylum cases in fiscal year 2008.

“When I think about why Fatoumata not deserves, but needs, to stay here, I can just count to six … her six kids who are all U.S. citizens,” Rosheuvel said.