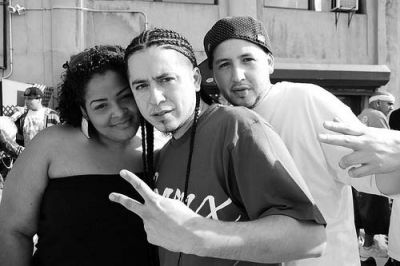 The case against the South Bronx-based hip-hop artists Rodrigo and Gonzalo Venegas was were dropped June 18, exactly a year to the day after the brothers were aggressively arrested by NYPD while coming to the aid of a Hunts Point street vendor who they say was being harassed by police.

Judge Darcel Clark unexpectedly granted a motion to dismiss the brothers’ two misdemeanors charges of obstruction of justice and resisting arrest, citing their positive impact in the community. Rodrigo “RodStarz” and Gonzalo “G1” are part of the group Rebel Diaz, along with Teresita “Lah Tere” Ayala.

The incident occurred after Rodstarz and G1 offered to translate on behalf of the street vendor, who did not speak English. After asking for the officers’ badge numbers, they were violently arrested. The brothers were originally charged with assaulting a police officer, however, a friend caught the incident on video and was able to quickly put it on YouTube. Within hours, 150 community members had rallied at the local precinct. Prosecutors withdrew the assault charge but continued to pursue the two misdemeanor charges.

Leah Horowitz is an attorney with the Bronx Defenders and represented Rodstarz during the case. She filed the motion to dismiss in the interest of justice on March 2 though she thought it unlikely the court would grant the motion.

The motion was accompanied by letters from over thirty members of the South Bronx community as well as individuals and groups Rebel Diaz had worked with in the United States and around the world.
Horowitz told The Indypendent she credits Rebel Diaz’s community support, saying it  “impressed a court system that isn’t easily impressed. And isn’t easily affected by those sorts of things. I think what it says is that organizing — which is what I’ve always known and believed in — is the way to go.”

She added, “It was obvious [the judge] thought very hard about it, and who they are, and the ridiculous nature of the case shone through,” adding, “She’s a good judge, she’s a tough judge, when she says something like that, it’s a tremendous sign of respect.”

”The church I represent is one of the churches that wrote letters of support” said Claudia De La Cruz, a resident of the South Bronx and pastor of San Romeros De Las Americas Church in Washington Heights. She added, “I was there in the court [for the decision] and I feel like it was a victory not just for Rebel Diaz, but a victory for our communities and so it was a happy moment because …justice was actually served.“

Rodstarz emphasized the importance of the letter writing campaign: “At the end of the day, if we hadn’t had those letters, I don’t think we would have had our case dismissed. People really took their time out of their day to write letters of support and it proved to work.”

The decision came as a surprise to Rebel Diaz’s lawyers, supporters and Rebel Diaz themselves. The judge’s parting words also came as somewhat of a shock. “The last words the judge left us with was “keep up the good work,” said G1. “I think it’s keep up the good fight, and that’s what we are doing. We left that courtroom with more conviction in what we do.”

Claudia De La Cruz was also impressed by the judge’s final words. She said, “I think it’s an affirmation and it’s interesting that it’s coming from a judge. I think it has a lot to do with that it was a black judge who said this … even though as a judge she represents the system that is systematically abusing our people, she was able to affirm herself as she affirmed the work that they do.”

Since they were arrested Rodstarz and G1 have emphasized that their case was part of a systemic problem. “The outcome of the case, it’s really easy to come to the conclusion that the system works,” said G1, adding “I would say it’s not so much that the system works, [but] that the system has cracks. As a community we have to exploit those cracks in the system. We need to find the small spaces of democracy that are left within this police state, whether through technology, through direct action through our communities, within our block.”

He added the community rallying around the case showed its resilience and defiance to the system, “In the process of fighting the case, we opened up a community center here in the South Bronx four blocks away from the precinct that locked us up,” said G1.

The Rebel Diaz Arts Collective opened in March. Located on 478 Austin Place in the South Bronx, the Collective includes “a performance space, a multimedia studio, and a computer lab art gallery… It’s all been made possible really by contributions from the members of the community,” G1 added.

Rebel Diaz not only organizes on a local level, but uses their music to fight injustice all over the world.  On June 17th, the day before the decision, they took part in a concert fundraiser for George Galloway’s 2nd Viva Palestina Convoy trip to Gaza.

Rodstarz said, “I can’t sit here and fight against gentrification in the South Bronx and ignore the situation in Gaza. I can’t sit here and talk about police brutality in Brooklyn or Harlem and not talk about people being assassinated in Oaxaca, because they are being displaced too in Mexico. I can’t talk about Palestine and not talk about independence for Puerto Rico.“ He continued, “If we are not making those connections we are blind. We got to start talking about things in the real landscape; the world is under attack. There’s colonization going on worldwide and gentrification going on worldwide.”

Rodstarz told The Indypendent that the ordeal has left the group the group even more determined to make a difference, “More than anything we are going to keep up the struggle for immigrant rights, keep fighting youth incarceration, against police profiling young black and brown men in the South Bronx. We are going to keep calling out the powers that be.” He added, “There is gentrification going on in the South Bronx. That is the reason they are doing immigrant street vendor sweeps, that is the reason why they are arresting young people… We are going to keep fighting with more strength than ever.”
For more information, see “South Bronx Rhythm Resistance” by Timothy Murray.