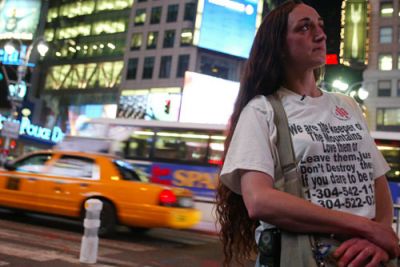 When the marquee signs on Broadway light up, a signal will most likely be sent from the New York Independent System Operator grid to the Lovett coalfired power plant. The Lovett facility service will shovel in coal that has been strip-mined from West Virginia mountains that have been clear cut and detonated with tons of explosives.

The residents of New York City participate in one of the most egregious environmental and human rights disasters in U.S. history — mountaintop removal mining methods in Appalachia that have literally blown up nearly 500 mountains, wiped out 1.2 million acres of hardwood forests and sullied 2,000 miles of streams with toxic waste. Scores of communities have been depopulated, left in ruin and saddled with unsparing poverty. Relying on heavy machinery and explosives, mountaintop removal operations have also stripped the region of needed jobs.

For 25 years, the Clean Water Act allowed the U.S. Army Corps of Engineers to grant permits to place “fill material” into waters of the United States, provided that the primary purpose of the “filling” was not for disposing waste. This policy largely prohibited mountaintop removal operations from dumping mining rubble and tailings into streams, and thus limited the scope of practice. The coal lobby, however, had a friend in the White House, and in 2002, George W. Bush allowed the Army Corps to redefine “fill material” to include mining waste. As a result, mountaintop removal mining moved into high gear.

Senator Kirsten Gillibrand (DNY) is co-sponsoring the Appalachian Restoration Act (S. 696), which would amend the definition of “fill material” in the Federal Water Pollution Control Act and to revise the Surface Mining Control and Reclamation Act to prohibit excess mining waste from being dumped into waters of the United States. The companion bill in the House of Representatives (H.R. 1310) has 23 New York co-sponsors.

New Yorkers also have an alternative to using coal. Easy as flipping a switch, they can purchase electricity directly from renewable wind sources through ConEdison Solutions (see nywind.com).

This article was adapted from Jeff Bigger’s article, “New York is Burning,” published on indypendent.org May 15.