Chomsky’s hour-long talk, entitled “Crisis and Hope: Theirs and Ours,” addressed a range of social and political topics. He examined U.S. political policies over the past few decades and encouraged the audience to challenge neoliberalism, military intervention and capitalism.

“There is a striking gap between public opinion and public policy on a host of major issues, domestic and foreign, and based on my judgment public opinion is often a lot more sane,” Chomsky said.

The evening began with a separate reception for the Brecht Forum. Alternative, politically-charged music performed by Earthdriver and Mahina Movement filled the sanctuary as the audience entered. Following welcomes by Rev. Robert B. Coleman from Riverside Church and three representatives of the Brecht Forum, Amy Goodman introduced Chomsky.

Goodman, the host and executive producer of the news program Democracy Now!, expressed Chomsky’s commitment to social causes and his impact on public thought. 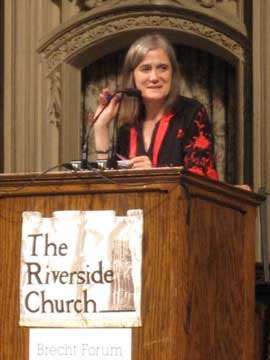 “I bet almost everyone here tonight in this sanctuary has a story about discovering Noam’s writings or his voice or his words and how it has changed your life,” Goodman said.

The crowd rose as Chomsky walked to the podium. The 80-year-old MIT professor explained the title of the lecture by contrasting the so-called crises of the first world countries with more pressing humanitarian concerns amongst impoverished peoples.

“Bailing out banks is not utmost in the minds of the people now facing starvation, not forgetting the tens of millions enduring hunger in the richest country in the world,” he said.

Following this observation, he challenged Western intervention in other countries’ affairs. He cited imperialism and U.S.-supported coups, such as the overthrow of a democratically elected regime in Haiti in 1991, as evidence that meddling by the West is often not in the best interest of native peoples.

Chomsky, a longtime opponent of neoliberalism, also criticized capitalist notions of progress. He explained that since the post-war “Golden Age of Capitalism” ended in the 1970s, real wages have stayed the same, work hours have increased, benefits have decreased, and social indicators have dropped. He finds these figures problematic to the general public of the United States.

“There has been economic growth, but it is finding its way into very few pockets, increasingly into the financial industries, which have grown enormously while productive industry has significantly declined,” he said.

As a libertarian socialist, Chomsky believes that workers should control their own industries. This would change the current disparity between the wealth and resources of corporate leaders and the difficult situation of laborers. Instead of simply ameliorating the current economic crisis, Chomsky advocates a reexamination of the capitalistic framework.

After criticizing the current economic system, he turned to the amount of taxes spent on military projects. He pointed out that the United States spends significantly more on military endeavors than any other nation, which he deems an unnecessary waste of taxpayer money. During the Cold War, increased military expenditures were explained by the government as necessary to prevent an attack by large, powerful countries. According to Chomsky, this reasoning should have been eliminated with the fall of the Berlin Wall in 1989. However, military spending has increased since then, but with a different explanation by the government. Chomsky expressed that this justification, specifically the exaggerated threat from the Middle East, is unconvincing and that military spending should be reduced.

“In brief, everything will go on exactly as before, but with new pretexts,” he said, satirizing the government’s position. “So we still need the same huge military system, but for a new reason: literally, because of the technological sophistication of third world powers.”

He then discussed the increased role of NATO despite the end of the Cold War and challenged similar efforts of “Western imperial domination.” Chomsky stated that the questionable policy of U.S.-run intervention will not end under the Obama administration, since many members of the current cabinet were adherents to neoliberalism in Clinton’s administration. Chomsky went on to criticize Obama’s efforts to undermine democratic referendums in Iraq, claiming that Obama is worried that Iraqis might reject a measure that would delay U.S. troop withdrawal. Chomsky further criticized the military strategies and huge civilian tolls in Afghanistan and Pakistan.

He urged people to pay more attention to the environment, discussing greenhouse gas emissions and the increased threat of global warming. Similarly, he noted the lack of efficient rail and other public transportation in the United States and suggested that workers from the struggling auto industry be put to work in building environmentally friendly transportation. In general, he advocated more rights for workers and a greater commitment to the environment.

According to Chomsky, policies that do not benefit the public result from the “constrained version of democracy” in the United States. He explained that James Madison and the other Founding Fathers sought to protect the interests of an elite group of people from the opinions of the majority. Such aristocratic principles are built into the U.S. Constitution, which has limited the political power of the general public. Common people gained some power during the 1960s and other activist eras, but Chomsky still sees a “democratic deficit” between what is in the best interest of the people and what is actually done. He encouraged the audience to stand against faulty policies and economic systems.

“That means tearing apart the enormous edifice of illusions about the markets, trade and democracy that have been assiduously constructed over many years, and to overcome the marginalization and atomization of the public,” he said. “Of all the crises that afflict us, I believe this growing democratic deficit may be the most severe.”

The crowd gave a standing ovation as he concluded his final statements. Chomsky joins a list of other prestigious politicians and activists to speak at the historic Riverside Church, including Martin Luther King, Jr., the Dalai Llama and Desmond Tutu.