This post originally appeared on the Gotham Gazette’s Wonkster blog. 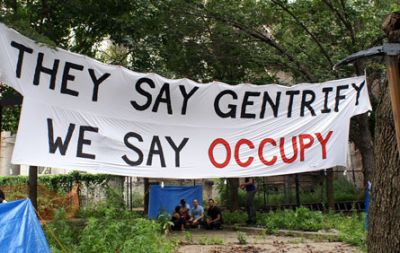 UPDATE, 7:35 AM, July 24:  The housing activists arrested last evening after taking over a vacant lot were released early this morning, Picture the Homeless reports.  Here’s the full post from their blog:

We wanted everyone to know that at 1 AM, the TENT CITY TEN were released from Harlem’s 28th Precinct after 8 hours locked up. All our folks were given desk appearance tickets.

We know many of you were interested in doing court/jail support, and that is incredibly awesome and appreciated, but for right now it looks like all we need is for allies to stay tuned.  Full details, including testimonies from the recently-released occupiers, are forthcoming. Keep checking the blog, or our twitter (@pthny) , for that information, and info about our NEXT STEPS.

Thanks, everyone, for an incredible day.”

Nine people were arrested this afternoon by the New York Police Department after occupying a vacant lot for over six hours to press their demand that the city use vacant property to house the homeless.

The protestors want the city to help turn so-called warehoused property into livable homes for low-income and homeless New Yorkers. A survey conducted in 2006 by the advocacy group Picture the Homeless found that 24,000 potential apartments could come out of warehoused property, enough to house the city’s homeless population.

This morning, blue tents were erected on a vacant lot at 115th St. between Madison and Fifth Avenues to create makeshift dwellings for the homeless, as dozens of housing advocates created an festive atmosphere with food, music, art and defiant chants.

“They say gentrify, we say occupy,” the crowd shouted.

Lorenzo Diggs, a member of the Housing Not Warehousing Coalition, led the crowd with a chant of “we are United States citizens, our taxes are our rent, to get off the streets, we’ll fill these lots with tents.”

The action was organized by Picture the Homeless and the Housing Not Warehousing Coalition. A similar protest outside a vacant building in East Harlem was held last March.

“We’re liberating this space for our communities,” thundered Picture the Homeless’ Rob Robinson during a press conference in the afternoon. Robinson was one of those arrested.

At the protest’s peak, an estimated 100 people occupied the vacant lot. Groups on hand to show solidarity included Domestic Workers United and Jews for Racial and Economic Justice.

Picture the Homeless organizer Frank Morales, who was also arrested, said that this particular spot was chosen because JP Morgan Chase, a bank that the federal government bailed out with $25 billion late last year, is involved with the property. JP Morgan Chase is listed as one of two “parties” to the property by the New York City Department of Finance’s City Register, along with Caparra La Nueva Associates, L.P. The bank, which recently posted over $2 billion in profits, paid back the bailout money in June.

“The government and banks have failed miserably. Homeless people know what the problems are, and we have ideas for the solutions. Since they won’t listen, the time is now for people to take action,” said Picture the Homeless member Sophia Bryant. “We’re going to hold this and defend this as long as possible.”

A “homeless fashion show” was held earlier in the afternoon before the arrests were made.

The police seemed to know of the action in advance, as around 10 stood at the Union Square meeting place, one of two, and followed activists onto the subway. More than two dozen officers were on hand at the protest site. At around 5:30 p.m., officers moved in on the occupied lot and made the arrests, according to Tej Nagaraja, Picture the Homeless’ press person.

As housing activists awaited imminent arrest, supporters were rallying and chanting outside the warehoused lot on a sidewalk.

“It is manifestly unjust that trillions of dollars are being handed to banks such as Chase while funds are drying up for affordable housing,” said Nathan Nessen, executive director for Jews for Racial and Economic Justice.

Councilmembers Tony Avella and Melissa Mark-Viverito are drafting legislation that would target warehoused property to convert units into housing for low-income and homeless people. (To read more about warehousing and the legislation, see “Unlocking the Apartment ‘Warehouse’“).

“I can imagine the frustration by Picture the Homeless and other housing groups throughout the entire city that we’re allowing the real estate industry to control the agenda, to warehouse whether it’s vacant properties or legitimate habitable apartments, all for the sake of greed,” said Avella, a mayoral candidate. “Meanwhile, people are going homeless, people can’t afford their rent, so people are going to start taking action into their own hands, and I can’t blame them.”

More Coverage From Around the Web: