ANATA, East Jerusalem, August 6—Yesterday I was interviewed by a reporter from the Jerusalem Post. She had contacted Jeff Halper, the founder of the Israeli Committee Against House Demolitions (ICAHD), about the organization’s seventh annual summer house-rebuilding camp, in which I am participating. He invited her to come out to the camp and see what we were doing. She couldn’t, she told him, “because we’re not allowed to go to the West Bank.”

“This is what passes for investigative journalism in this country,” Jeff remarked.

And that’s a shame, because that means she won’t be able to see and report on so many things that might help her audience understand what occupation means to the more than 2 million residents of the West Bank. 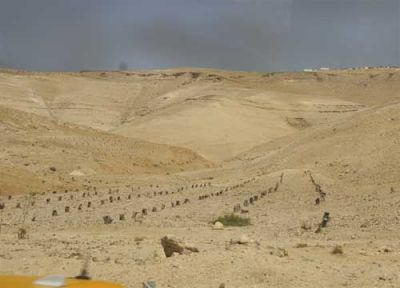 She won’t see the curious children who come to our construction site near the Israeli “security fence,” the wall that snakes through the West Bank, cutting through villages, separating farmers from their land, and even splitting in two the campus of Al Quds University (Al Quds is the Arabic name for Jerusalem). Some of the children began throwing stones at the soldiers by the wall the other day, drawing attention from the police and making us nervous that they might shut down our project, a home for the Sbaih family, whose previous house was demolished by the Israeli authorities. (Some 15 percent of the 162 houses that ICAHD has reconstructed over the last seven years have been re-demolished by the Israeli military — the reconstruction work is at least as much a statement of resistance as it is an effort to provide homes for Palestinians, and the families who participate do so with this understanding.)

The Jerusalem Post reporter won’t see the contrast between the illegal Israeli settlements here — lush green landscaped communities with municipal swimming pools and well-maintained roads — and the Palestinian villages, whose narrow streets, if they are paved at all, are so uneven that the vans we cram into to go to our worksites can only travel at five or ten miles an hour most of the time.

Jeff took us on a tour of one of these communities yesterday — Ma’ale Adumim. It encompasses land stretching all the way to the Dead Sea, and, when construction finishes, it will nearly bisect the West Bank. It includes an industrial park and an aeronautics and space college. This school is intended to turn out technicians to work at the airport that is planned to serve “Greater Jerusalem,” itself a sprawling swathe of land with settlements topping the hills and dividing the surrounding Palestinian villages from each other. Most people live in Ma’ale Adumim more for economic than ideological reasons; unlike the religious settlers who believe the land was deeded to them directly from god, they moved to the settlement because government subsidies make it financially attractive and they feel alienated from the Orthodox population that is ever more dominant in Jerusalem.

Residents drive to work in the city every day, as they do in suburban bedroom communities in the United States, but here they use four-lane highways reserved for Jews, while Palestinians must travel on smaller side roads, going through checkpoints that the settlers never see. The ubiquitous checkpoints that can cause a trip of 10 miles to take hours are tucked out of sight in the tunnels where the Palestinian roads pass under the settler highways. Even the wall itself is constructed so that it is not so intrusive from the Israeli side. While Palestinians are greeted by a 25-foot concrete barrier, often on the Israeli side, the area approaching the wall is a gentle slope with landscaping. 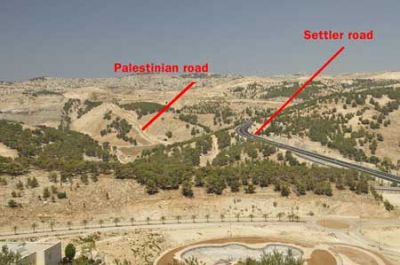 The Israeli journalist won’t see the irony of the acres and acres of stumps from Palestinian olive trees that have been cut down by the military, while other ancient trees with thick gnarled trunks have been uprooted whole and transplanted to beautify the grassy traffic circles in the settlements.

“Imagine seeing a 400-year-old olive tree that has been in your family for generations planted in a Jewish settlement,” Jeff says. These green oases with their grass- and tree-lined streets are a tremendous drain on the water resources of the region. Israel and its settlements in the West Bank use 85 percent of the water from the West Bank, while in many Palestinian villages and cities, municipal water comes only two days a week. And it’s too bad the reporter won’t come to our construction site to see what a small group of people, fueled by a passion against injustice, can accomplish. In only a few days, we have gone from a bare foundation to a structure with four walls and a roof, with the beginnings of interior walls tracing out the rooms where a family will raise children, eat, drink, sleep, and — we hope — grow old together.

Yes, with a little effort, it’s possible to go through life in Israel and the settlements without ever seeing a Palestinian. And that’s the real shame.