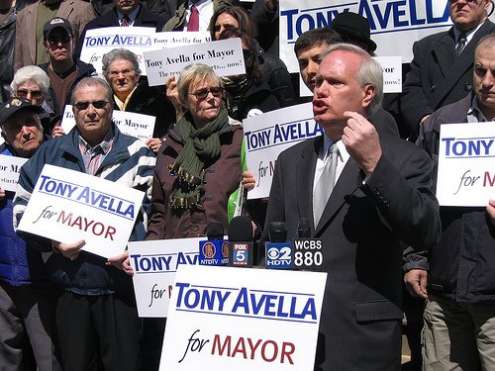 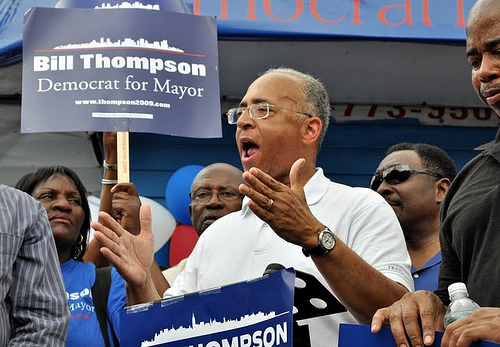 Not many fireworks went off last night as the two Democratic primary candidates for mayor of New York squared off in a debate at the New York Public Library, the first of two meetings between candidates Bill Thompson, the city controller, and Tony Avella, a council man from Queens.

Avella, the underdog in the race, and Thompson, the favorite, largely went after Mayor Michael Bloomberg’s record instead of attacking each other, although Avella did manage to throw some barbs at his opponent.  Both Democratic candidates painted Bloomberg as an out of touch elitist who has failed the city on numerous issues, including policing, homelessness, the swine flu outbreak, real estate development, and more.

They both attacked Bloomberg in the first round on term limits, with Avella saying Bloomberg is “arrogant” and that the extension of term limits left “a black mark on democracy in this city.”  Thompson labeled the term limits vote “a disgraceful end-run around democracy.”

While Thompson stayed above the fray, at times Avella forcefully took him on, attacking him as the Democratic “machine candidate” who takes money from Wall St. and the real estate industry for his campaign.  Avella also attempted to tie Thompson to the ongoing state pension fund scandal, and hit Thompson for taking “more than $500,000 in campaign contributions from [the pension system’s] growing roster of money managers since he first entered the 2001 race for comptroller,” as the New York Times reported.

Thompson didn’t take the bait, and defended his record as City Comptroller, saying that no scandal has touched his office and that there was no “pay to play” going on with campaign contributions and money managers landing jobs with pension funds.

I reached Avella by cell phone this morning to get his reaction to the debate last night.  Avella said he thought “he did fine” in the debate but that he always thinks he “can do better.”  Avella said that Thompson’s campaign strategy was not to engage him on the issues–which makes sense given Thompson’s substantial lead over Avella in the polls, though Avella said Thompson’s “non-committal” campaign was doing a “disservice” to New York voters.

“They’re trying to ignore me, there’s no question, because they don’t want the public to know anything about our campaign,” Avella said.  He said he was not satisfied with Thompson’s answer to Avella’s pointed question to him about money managers who were hired by pension funds after giving campaign contributions to Thompson.

“He can’t avoid it.  It’s a real issue, and if he thinks by avoiding answering it with me, somehow if he wins the primary, he’s not going to be able to avoid it when Mike Bloomberg starts running commercial after commercial about this issue.  That’s why I think he’s a poor candidate to represent the Democratic Party,” Avella said.

(Thompson’s campaign has not gotten back to me yet, but if they do, I’ll update the post with any response I get.)

The two candidates agreed on a number of issues, sharing opposition to the overturning of term limits, supporting the firing of Police Chief Ray Kelly, attacking Bloomberg’s policies for combating homelessness, and supporting the reform of mayoral control of schools.

Brian Lehrer of WNYC asked the candidates about the NYPD’s use of stop-and-frisk, which, as this publication reported, has dramatically increased under the Bloomberg administration.  Avella said he would abolish stop-and-frisk and appoint a deputy mayor for human rights, while Thompson said he would keep it as a “useful police tool” but that it needs to be used the right way.

When asked about discretionary funds and the City Council slush fund scandal, Thompson said he was in favor of greater oversight and transparency over member items, while Avella again took a harder line, saying that he would end discretionary funds and include in each budget cycle funds for local initiatives on things like education and community activities, which is what member items are supposed to fund.

Perhaps the most interesting moments of the debate, but the most irrelevant to the campaign, came during the “lighting round” of questions from Dominic Carter, the debate moderator and a senior political reporter for NY1.  During this round, the audience found out that Thompson has smoked weed but Avella has not touched even a cigarette, that both candidates support naming a subway station after Michael Jackson, and that both candidates agree that David Dinkins was a better mayor than Rudy Giuliani.  (In Bloomberg’s New York, Thompson would probably be arrested for smoking ganja–check out this Huffington Post article on how NYC is the marijuana arrest capital of the world.)