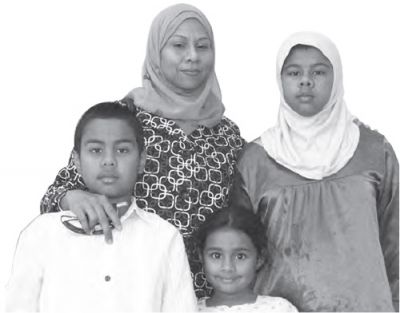 Shareena Rahat was sitting in traffic on the Grand Central Parkway in Queens when the slurs began.“Dumb fucking Pakistani, why don’t you go home?” allegedly yelled a man in the car next to hers, who gestured angrily at Rahat. She said she was on her way to an Astoria mosque to break the Ramadan fast with her two eldest children, and was wearing a hijab, the scarf worn by Muslim women as a sign of modesty.

Rahat’s 11-year-old daughter didn’t even think that the man was talking to them.“ He can’t be talking to us, we’re not even Pakistani, Mom,” she said. Rahat, who immigrated to the United States from Guyana 27 years ago, lost extended family in the terrorist attacks of Sept. 11, 2001.

Rahat said that she ignored his insults at first, but after allegedly he spat on her car and then swerved into her lane, in an attempt to cause a collision, inaction was no longer an option. She immediately pulled out her cell phone to call 911, which she felt only angered the man further. She said that he veered toward them again.“He then gets out of the car and started cursing again. He comes to my window and knocks the phone out of my hand,” Rahat said.

The Queens district attorney charged Michael Doherty, a 41-year-old Queens resident, with assault and harassment as a hate crime after the Sept. 7 incident. Queens Legal Associates, which is representing him, could not be reached for comment. The Queens County district attorney’s office refused to comment on the case. The case is pending.

Muslim organizations across the country, as well as advocates of religious freedom, claim there has been an increase in hate crimes. The Council of American-Islamic Relations (CAIR) points to more than dozen recent incidents across the country in which Muslims have been physically assaulted or harassed.

Nearly six in 10 American adults — 58 percent — say that Muslims are experiencing more discrimination than other religious groups, the Pew Forum on Religion and Public Life reported in a September 2009 study. Further, CAIR expressed concern about a “spike” during the month of Ramadan, which ended Sept. 19 this year.

For Rahat, however, this incident was only the beginning — it took nine days for Doherty to be arrested. Though she called 911 from the scene of the crime, Rahat had to visit two local precincts, as well as track down phone records and recordings of the 911 call, before police acted and arrested him.

Many observers are not surprised by Rahat’s experience.“Across the country I have had many people tell me when they have tried to report hate crimes they have had difficulty,” said Saadia Khan, the national hate crime prevention coordinator at the Muslim Public Affairs Council’s Los Angeles branch, “Unfortunately, it comes down to the training of law enforcement. They need more diversity training, and they need to be held accountable.”

Linda Sarsour, director of the Arab American Association of New York, says that despite the city’s diversity, Muslims, especially those wearing religious clothing such as hijabs, are often targets of hate.“It’s a reality for us the minute we step out of our neighborhoods,” Sarsour said. “We need to put ourselves out there more to show that we are all the average American. Everyone is after the American dream. We are peaceful people,” Kahn said.

Though Rahat, who works as a nurse at a health clinic in Queens, says that she has experienced similar incidents before, this is the first time she felt physically threatened. She is also troubled by the impact the encounter has had on her children.

“Now my kids want to hide their identity. My eldest [daughter] doesn’t want to wear hijab or scarf on the way to mosque, even in the car. They are scared someone will attack us or pull out a gun on us,” Rahat said.

“Especially in the United States of America, in New York, it’s outrageous that people have to tolerate this kind of hatred and vindictiveness,” Rahat said. She added that she has asked the prosecutor to require Doherty to perform community service in the Muslim community.