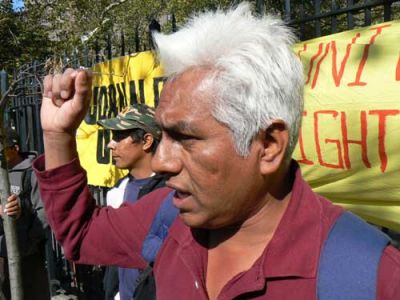 Nearly every day along Broadway and 69th Street in Jackson Heights, Queens, day laborers — mostly undocumented immigrants — line up and wait for someone to come by and offer them a job. On Tuesday mornings, jobs or no jobs, day laborers gather nearby in Hart Park to chow down on a free hot meal provided by St. John’s Bread and Life program.

But on Tuesday, Sept. 22, the day laborers got a different type of treat.

According to witnesses, their meal was interrupted when the New York Police Department arrived to sweep the more than 80 laborers out of the local public park.

Roberto Meneses, president of Day Laborers United, said the police kicked them out, claiming only adults with children were allowed inside. He believes the police were responding to complaints by local residents, concerned about the growing number of day laborers in and near the park.

New York City Department of Parks and Recreation signs posted on the fences read, “Playground Rules Prohibit: Adults Except in the Company of Children.” But according to Kathy Byrnes, director of the mobile soup kitchen program, the signs are misleading.

There are “distinct areas” designated for adult use, like the basketball courts, she said. “What needs to take place now is the clarification of this playground … in a language that people read.” The signs are in English while most of the day laborers only speak and read Spanish.

Park employees beg to differ. Employees at Hart Park, questioned about the rules, pointed to the sign and said, “Read the sign. This park is only for adults with children.”

Several day laborers said that park employees routinely force them out of the park, while the police often issue them tickets for “using the benches” and for “public disturbance,” claiming the park is off-limits to adults not accompanying children.

According to other sources, park employees, as well as the NYPD, seem to be enforcing their own interpretation of the rule.

Official park regulations, according to Phil Abramson, a spokesperson for the City Department of Parks and Recreation, state that adults without children are allowed inside Hart Park in all areas except those clearly designated playground by colored pavement around playground equipment.

“The park is open to anyone,” Abramson said, “the restrooms are open to anyone [as are] the benches.” He said that this is the first time he has heard of confusion over the posted signs.

However, this debate over park access has been longstanding.

Back in 2004, New York State Assemblyman Jose Peralta (D-Queens) worked to mitigate similar tensions resulting from the presence of day laborers. According to his Chief of Staff Yonel Letellier, Peralta helped broker an agreement between the Parks and Recreation department and the advocacy group Day Laborers Project to allow the use of benches and bathrooms by the laborers.

Day laborers “should have access by law,” to the park, said Letellier, “but sometimes things don’t work the way they should.”

The NYPD did not respond to repeated interview requests by The Indypendent.

Five years later, and 21 months into the economic recession, the dramatic increase in day laborers seems to be fueling local tensions, as more people are pouring into the streets soliciting work and showing up for the Tuesday meal.

Byrnes says she’s seen a “40 to 45 percent increase” in the number of day laborers requesting food over last year. “That alone tells me about the economic need and how many people are still around without a job at this hour in the morning,” she said.

As the New York City unemployment rate hits double digits — 10.3 percent for the month of September — Meneses says there are more than 600 laborers around the Jackson Heights streets on any given day.

On Sept. 29, more than 40 day laborers and immigrant rights activists held a protest in response to the police action. They rallied for the right of day laborers to solicit work in the area and for the continuation of the Bread and Life program inside the park.

Felix Cruz Ortiz, coordinator of Day Laborers United said, “They’ve been giving us tickets and arresting us for no reason. What they’re doing is an injustice.”

Letellier said he’s working to address these ongoing concerns. “Right now we are in the middle of coordinating a meeting to explain to [the day laborers] what’s going on, to let them bring forth their tickets, and let the legal experts find out if their human rights have been violated,” he said.