CAIRO–The French delegates to the Gaza Freedom March (GFM) spent the night in front of their embassy here, pressuring their ambassador to support them in negotiations with the Egyptian government, which has so far refused permission for marchers to enter Gaza. As of 7 pm this evening, the site was locked down by the Egyptian police, who were not allowing anyone in or out of the protest site. Activists from GFM who came by to document the action were told to put their cameras away. 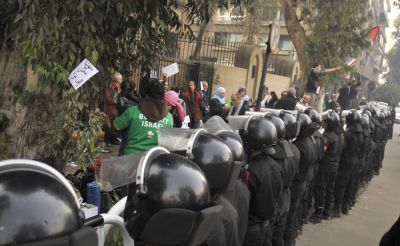 The French delegates to the Gaza march began their protest last night, taking over the street in front of the French Embassy, which is near the Giza zoo. After blocking traffic for five hours, they agreed to move their protest to the sidewalk in exchange for a commitment from the French ambassador to negotiate with the Egyptian authorities on their behalf. 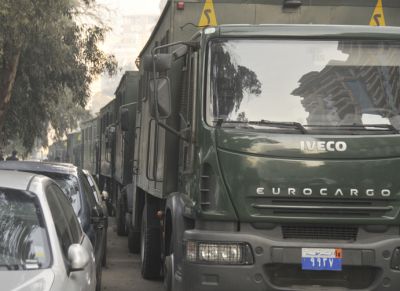 When I visited the site this morning, the street opposite the embassy was lined with green trucks filled with riot police. The sidewalk of the entire block in front of the embassy itself was taken up by the protesting delegates, who were completely surrounded by two rows of police. The French marchers had pitched tents and set up sleeping bags on the sidewalk. 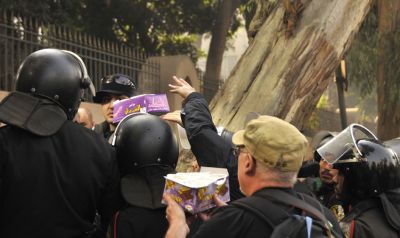 Many GFM participants from other countries came to the site to show solidarity; some brought coffee, which they handed in to the grateful protesters over the heads of the riot-gear-clad Egyptian police. The police alternately allowed the solidarity efforts to continue and harassed the activists who were not inside the police line to either move inside their blockade or move on and put their cameras away.