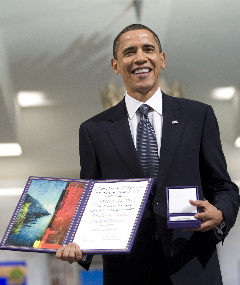 The President was handed the Nobel Peace Prize, shook hands and smiled as the cameras flashed.  When the photographers finished, security men glided back into orbit around him. After he left the presenter saw a red smudge on his fingers, shrugged and wiped it on his pants.

On the flight back, the President took the medal out and held it in one palm and held the report of drone attacks he authorized in the other palm. He remembered the euphoria of election night, the waves that surged from around the world and crashed on him. He hefted the medal. It felt like a heavy coin washed into his hands by those waves. He looked at the report listing men killed by his drone attacks and new targets for tomorrow. The reasons for bombing ran through his head, sober logical reasons but a silent thought wove through them like a crooked line of smoke. I must kill to be credible, he thought, I must be seen as a serious man willing to use lethal power, if not, they will question me.

He held the medal and the report as if balancing the people’s needs or the power he needed when he saw a red fingerprint on the medal. He took it to the bathroom, turned on the faucet and washed it as more red droplets circled the drain. He let go of the medal, stared at his blood-stained fingertips and rinsed them over and over muttering, “Out damn spot.”

He began to carry a rag and whenever his hands felt wet he quickly wiped them. Few saw him do it and those that did thought it was a hygienic precaution because he met so many people a day. After timing his leaky hands he realized it occurred when someone was killed by the bombs he signed off on. He couldn’t touch things anymore. He couldn’t tie his tie without staining it. A staff person was instructed to tie it for him and people secretly laughed at the President’s vanity, not knowing that as they knotted it he was rubbing the rag in his pocket. He ordered every document to be laminated so any fingerprints could be wiped clean. Finally he ordered his family away on a series of trips to avoid them. He heard their voices at night over the phone, asking when they could come back but he moved their re-union further away. After a week the bleeding seemed to taper off when a four-star General came in, his chest jangling with medals and insisted they needed a heavy round of bombing. The President cradled his head.

Each day felt like a ringing alarm clock. He waited for it to begin, checking his hands every few minutes but seeing no change. His Blackberry buzzed; he pulled it out and heard his daughter’s voice. She was telling him about the sights around her when he saw a bloody fingerprint on the screen. On the other side of the world, a bomb fell and blasted a family apart and their blood was gushing through his hands. The President dropped the phone with his daughter’s voice and staggered through the White House, leaving red hand-prints on the walls that his staff followed to find him as he ran faster and faster. 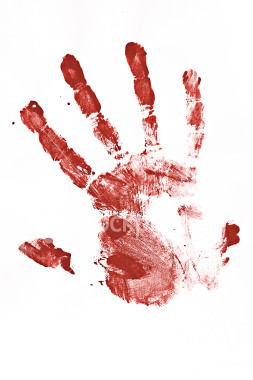