On Saturday, Jan. 23, a dozen musicians, comedians and spoken word artists teamed up at Harlem’s historic Apollo Theater for a multilingual, transnational explosion of Muslim arts and culture. The event was headlined by hip-hop artist and actor Mos Def and coordinated by the Chicago-based Inner-City Muslim Action Network (IMAN).

“We’re trying to do something that comes from the heart and goes to the heart,” said founder and Executive Director Rami Nashashibi. He started IMAN in 1995 to create a holistic antidote to the painful experience of poverty and abandonment in the inner city. Deeply rooted in the spiritual vision of the oneness of humanity — “iman” means “faith” in Arabic — the network organizes around a three-pronged strategy to “change, serve and inspire.”

The group’s efforts to link Islamic culture and activism are all the more important in the wake of attacks on Muslims since 9/11. Hostility toward Muslims was heightened by the widely publicized attempted airline bombings on Dec. 26.

Saturday’s sold-out event, which also marked the opening of an IMAN branch in New York City, encapsulated this philosophy. From Progress Theater’s biting performance piece on the experience of a Black Muslim woman being photographed in her hijab by tourists to the exacting call from hip-hop duo “The ReMINDers” to “feel the transition from denial to acceptance,” the artists linked the delicate process of healing and self-awareness with the ability to act for change.

The gathering opened with a reading from the Quran in Arabic, and closed with a formal prayer. In between, informal expressions of prayer and praise were incorporated into almost every performance. Among these supplications were repeated prayers and expressions of anguish on behalf of and love for the people of Haiti. 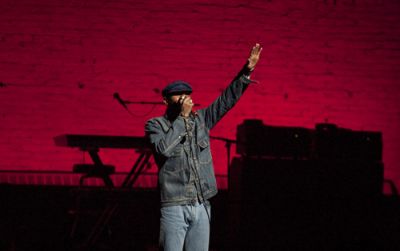 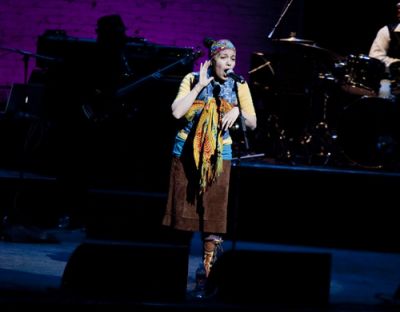 A collection was taken up for the service agency Islamic Relief, which has opened three camps in Haiti to assist in the humanitarian response to the earthquake. Nashashibi also addressed the political implications of the disaster in Haiti, praising Obama for extending Temporary Protected Status (TPS) to undocumented Haitians who were already living in the United States and saying that IMAN would be active in urging him to extend TPS to Haitians who might be forced to relocate due to the catastrophe.

IMAN ’s efforts in New York will use arts and culture as a starting point for building direct service and social change initiatives. This focus comes out of a yearlong study of the daily patterns and needs of New York City’s Muslim population; the study concluded that spiritually rooted arts would be the most effective way to bring this group of nearly one million people from more than 30 different countries together.

“We see these [arts, service and social change] as intimately connected,” said Asad Jafri, who is the national director of arts and culture for IMAN . “We need creative expression of the needs and issues, triumphs and struggles that communities are going through in order to do the work of repairing and changing our society. Hundreds of years ago, music in Islamic culture was used to heal people with mental illnesses. Today, with our culture of capitalism and measurement, we lose faith in these non-quantifiable aspects of human life. But we need them now, especially in these trying times.”

The link between Middle Eastern Muslims and Muslims of African American descent was a particular focus. Well over half of the artists who performed at IMAN ’s event were Black, and organizers emphasized that they were building on the African-American tradition of trailblazing.

“Bringing IMAN to the Apollo is a reminder to the American Muslim community of its roots in the African-American community,” added Amir Al-Islam, chairman of IMAN ’s board and professor at Medgar Evers College in Brooklyn.

Cultivating the capacity of artists to unite communities is an ongoing focus for IMAN , Jafri said. For years, IMAN has been holding retreats in which artists discuss how to increase their impact as community leaders, and support each other in extending the call for unity and change.

“We are demonstrating that there is power in Muslim unity,” Abdul-Matin said. “New York is a city of islands, of villages. To bridge those villages, we need connectors — these are our connectors!”